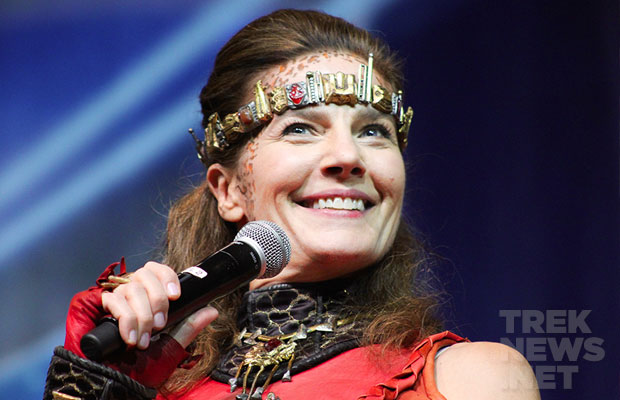 The 2014 Las Vegas Star Trek convention continued on Saturday with a myriad of celebrity panels, an Enterprise cast reunion, and a Star Trek-themed orchestral performance.

The day kicked off with Star Trek Into Darkness and RoboCop star Peter Weller appearing on stage. Weller discussed his Into Darkness character, saying “Everything that Marcus said was true.” 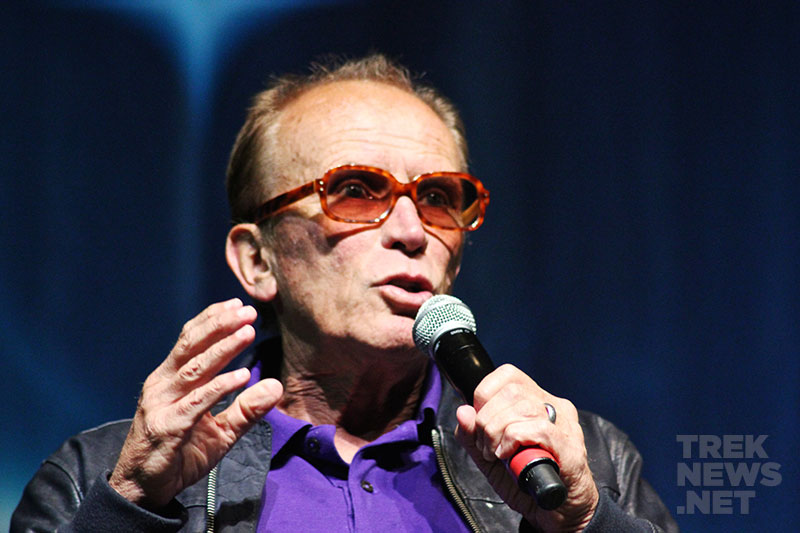 “So why is Marcus the bad guy? He is a patriot. Enterprise has to go–collateral damage.”

“Find out what you really want to do and do it!” Weller said of his decision to do Naked Lunch instead of RoboCop 3. 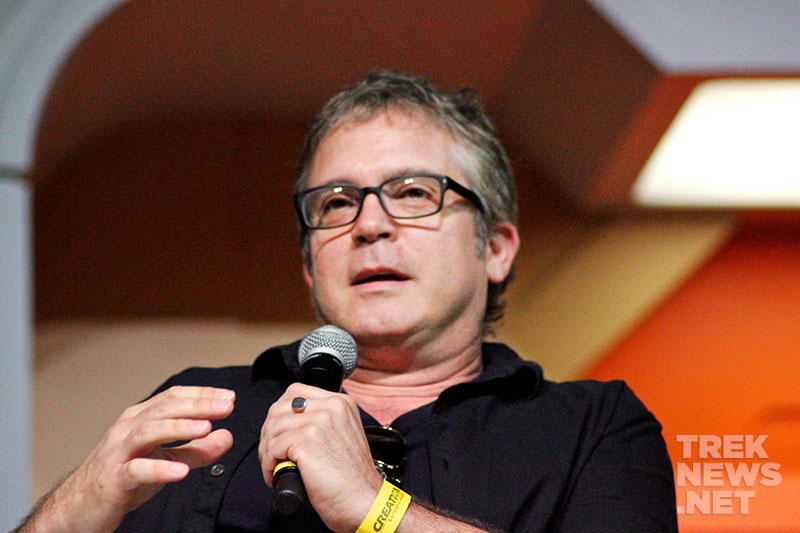 Braga told the Las Vegas audience that he misses working on Star Trek, but has kept busy with other television projects, including Flash Forward, 24, Salem and Cosmos.

“I think one of the reasons I was so passionate about Cosmos and threw myself so deeply into it was because there was some part of me that missed that Star Trek feeling so I channeled some of that into Cosmos.” he said.

“I did bring a lot of my Star Trek sensibilities to the show,” he said, discussing the success of Cosmos.

On the possibility of Star Trek returning to television, “They probably wont do one until the movies have run their course is what the word on the street is. So they are going to do another movie. But I would love to see another show. I have no idea what it would be at that point.” Braga told the crowd. 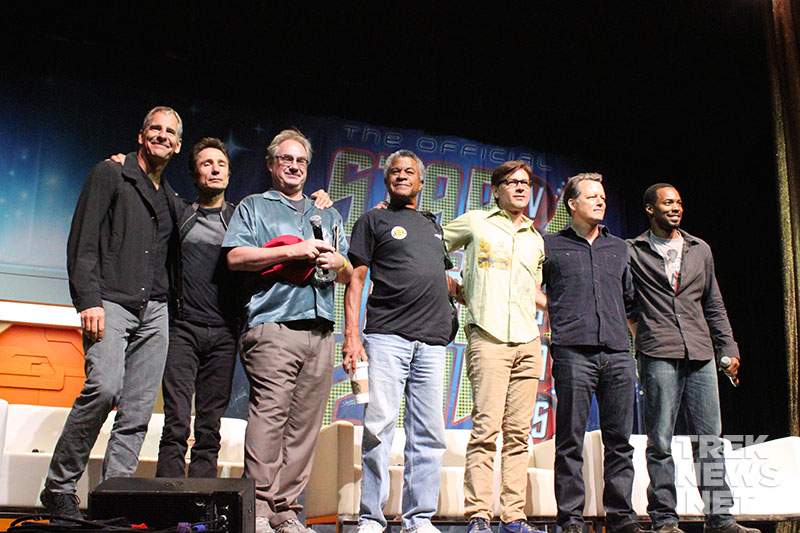 “It changed the direction of the show and led to the Xindi arc. The producers asked me about it and I said ‘Yeah, let’s do it. We need to do it.’” 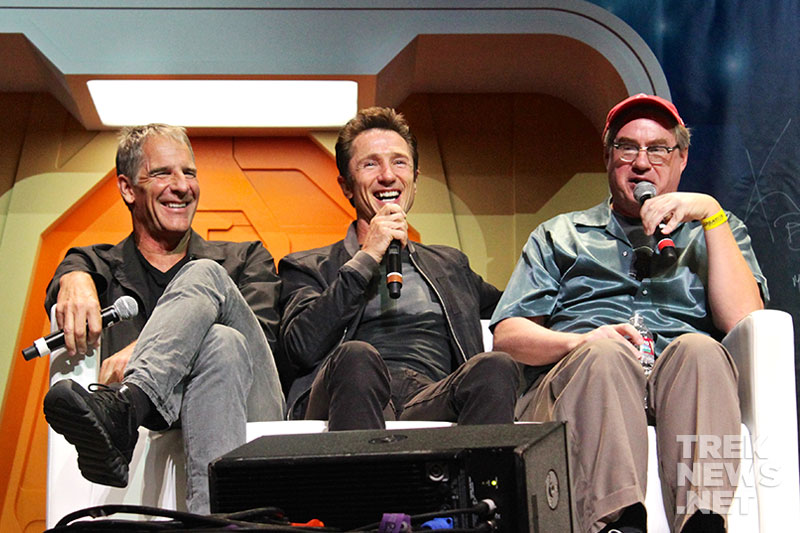 “We were fortunate to have a season four. The idea was we were going to help create the Federation. That was our journey.”

“You can’t please everybody.” Bakula said of the way the series ended with the episode “These Are The Voyages…”.

Next, it was time for Michael Westmore to transform Terry Farrell into Jadzia Dax for the 539th time. Only this time, it would be done in front of a live audience. 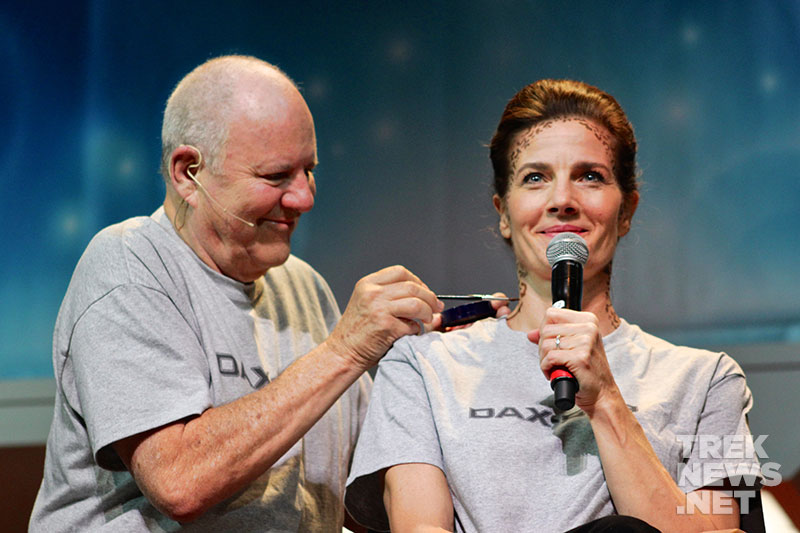 The two candidly talked as Westmore carefully applied the Trill spots to Farrell’s face and neck.

Following the spots, Farrell excused herself to go get her hair prepped and her costume on. 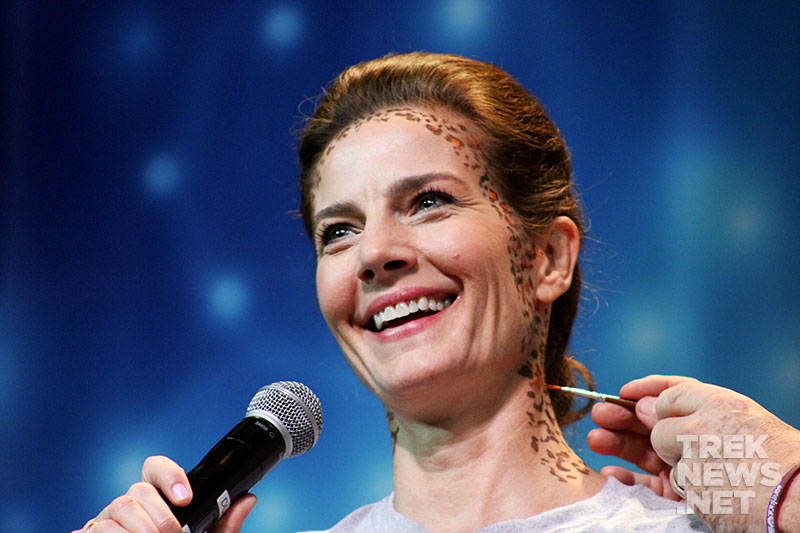 “I was taking combinations of things you were already familiar with,” Westmore says of his alien designs across the Star Trek franchise. 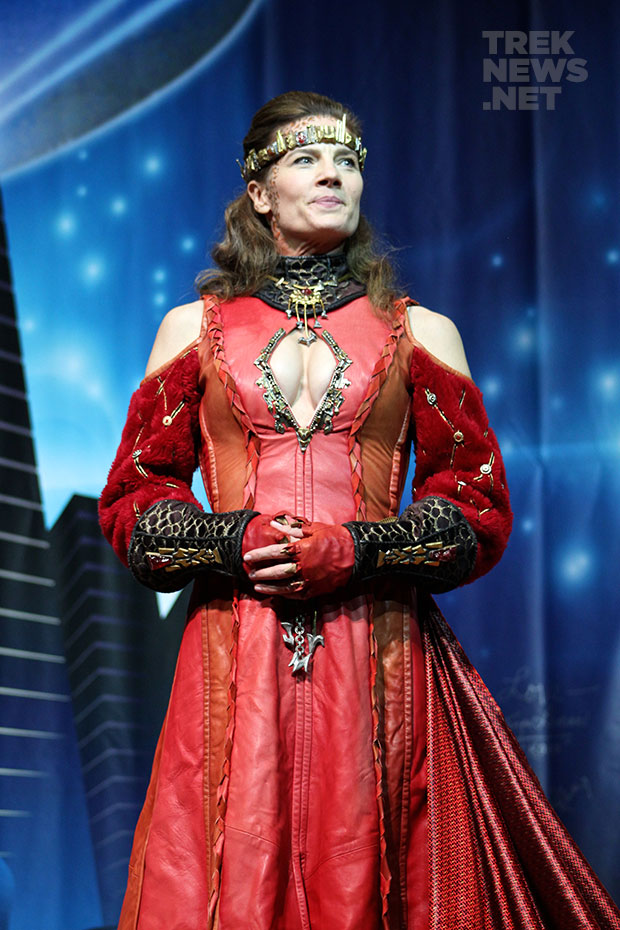 Kate Mulgrew, Tim Russ, Ethan Phillips and a surprise appearance by Garrett Wang set up the next panel, a partial Voyager cast reunion. 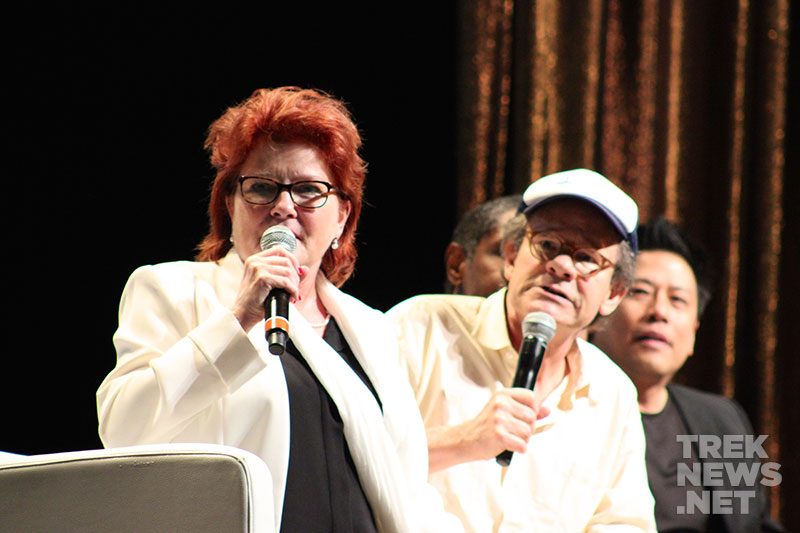 Discussing Jeri Ryan as Seven of Nine, Mulgrew said “She did a great job in a very difficult role”. 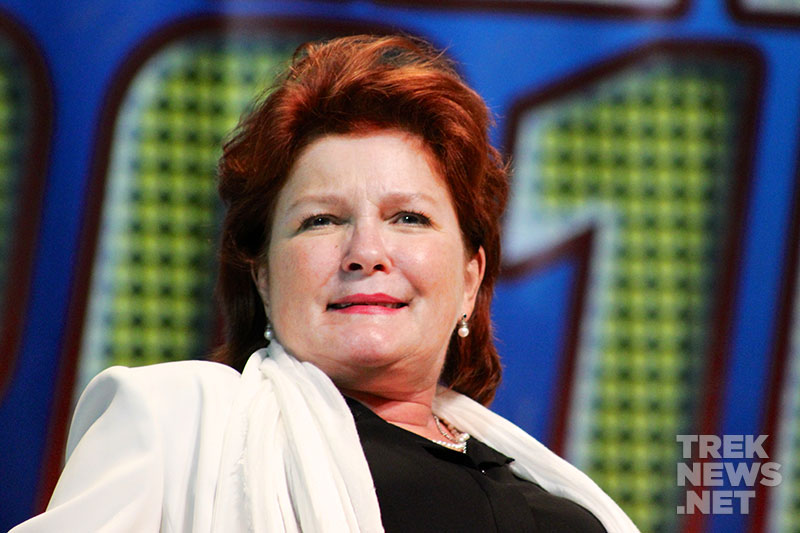 “I don’t understand social media,” Mulgrew told Wang, when he asked why she wasn’t on Twitter. 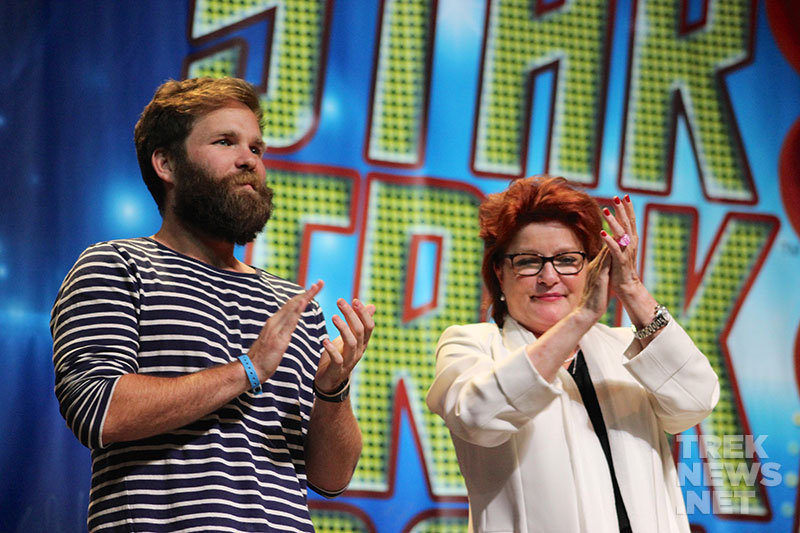 Closing out the panel, Mulgrew brought her son Alec Egan on stage while Russ brought his daughter up, as the Voyager crew waived farewell to the audience. 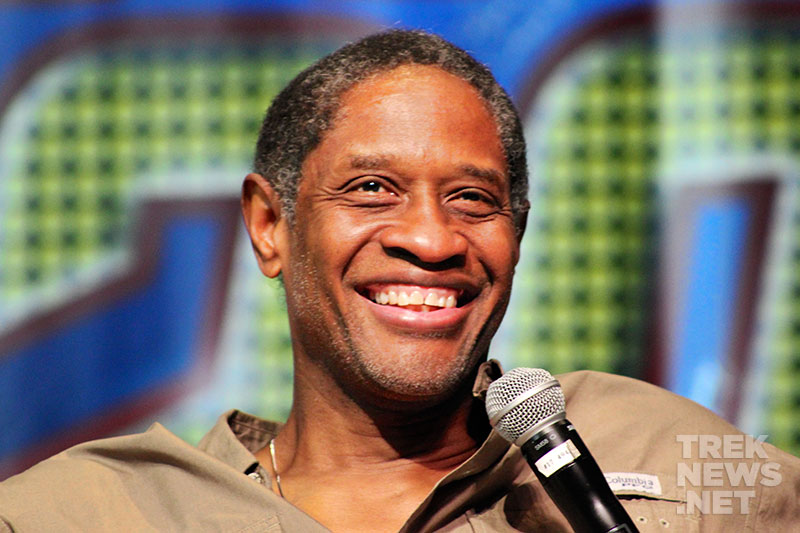 Star Trek’s new “Scotty”, Simon Pegg hit the stage next. Pegg said he was he was originally apprehensive to take on the role of Scotty. Saying he was worried that it may take up the next ten years of his life.

“He’s an ordinary guy in an extraordinary situation,” Pegg said of the “Scotty” character.

Focussing for a few minutes on his childhood fascination with Doctor Who, Pegg said “Tom Baker was my Doctor,”. 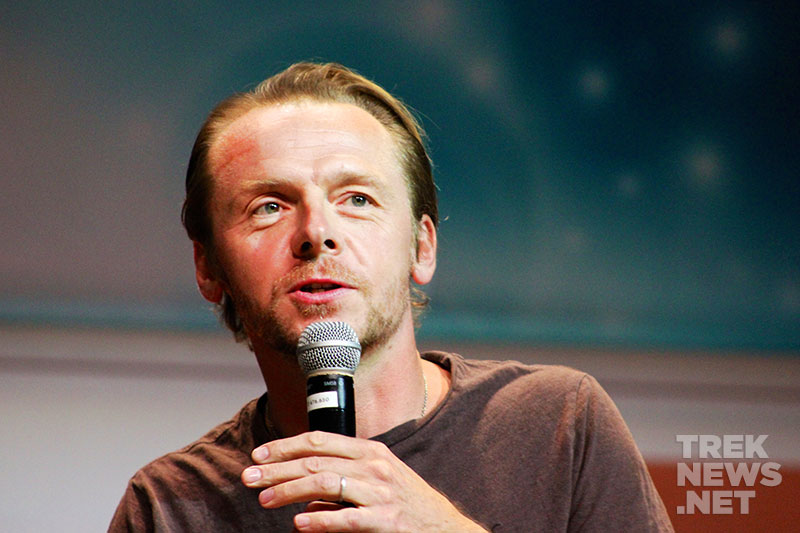 “I can’t wait to make Star Trek 3 next year” Pegg said. Reiterating that that the film should be released in 2016 to coincide with the 50th anniversary of the franchise.