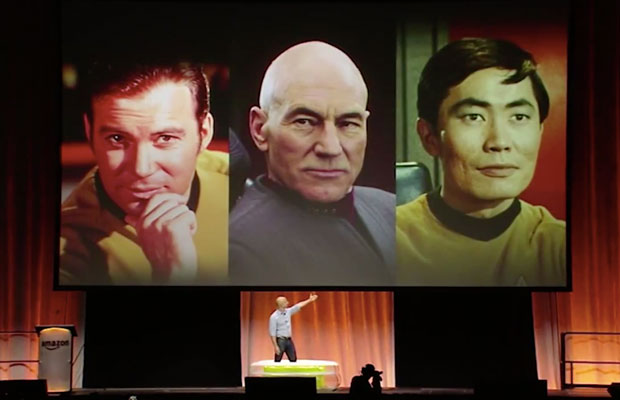 You may soon see some of Star Trek’s biggest stars getting completely soaked.

During Amazon’s all-hands meeting on Friday, CEO Jeff Bezos got up on stage to execute an “Ice-Bucket Challenge”. While standing in a kiddie pool, Bezos challenged Star Trek stars William Shatner, Patrick Stewart, and George Takei to take the “Challenge” next.

Shatner had been previously called out on Twitter by his friend and country music star Brad Paisley.

So for my #icebucketchallenge I challenge @Ludacris @WilliamShatner and @Wildaboutmusic if they're man enough. Collectively.

The viral-awareness campaign has recently taken social media by storm and involves daring a person to dump a bucket of ice water on their head within 24 hours, or donate $100 towards fighting ALS. Once completed, they’re supposed to challenge others to do the same.

The ALS Association has received more than $4 million in donations — spurred by the “Challenge” — between July 29th and August 12th.

Watch Bezos challenge Shatner, Stewart and Takei in the video embedded below.

Shatner has announced on Twitter that he will “take the challenge,” saying that he’ll “be sopping wet by nightfall”.

I said I would take the challenge. Let me finish my meetings. I'll be sopping wet by nightfall…or at least that's the plan.