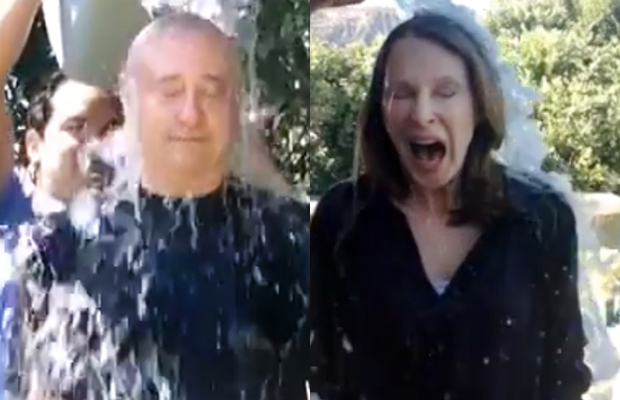 Hot on the heels of William Shatner’s “Ice-Bucket Challenge” video, Star Trek: The Next Generation stars Brent Spiner and Gates McFadden have also been soaked.

“I have accepted the ALS Ice-Bucket Challenge from my friend Ramon de Ocampo,” Spiner said while wearing a black t-shirt and shorts. “I’d also like to take the opportunity before I get dunked to challenge my friends: Armin Shimerman, Kitty Swink,”

“I’d also like to challenge my friend Gates McFadden, who I’d just like to see her hair wet.”

“I wish this was Gatorade, but uh, whatever,” Spiner admitted before the bucket of ice-water was dumped over his head.

I AM ACCEPTING THE ICE BUCKET CHALLENGE FROM MY SOON T9 BE EX-FRIEND @BrentSpiner https://t.co/DVudte3tsC #icebucketchallege

Sporting a blonde wig and a French accent, McFadden answered Spiner’s challenge, saying “My name is Gates McFadden and I’m here to accept the Ice-Bucket Challenge from Brent Spiner, because he wanted to see my hair wet.”

“How lame is that?” she joked as she pulled the faux blonde locks off.

McFadden, who admitted her own father died of ALS, went on to challenge Save By the Bell‘s Mark-Paul Gosselaar, her friend Larry Moss and Captain Jean-Luc Picard himself, Sir Patrick Stewart.

“I just want to see what you look like with your hair wet,” she said.

Her reaction is priceless. You can can check it out below.

Stay tuned to TrekNews.net to see if Patrick Stewart is next to take the plunge.

In this article:Brent Spiner, Gates McFadden, Star Trek: The Next Generation