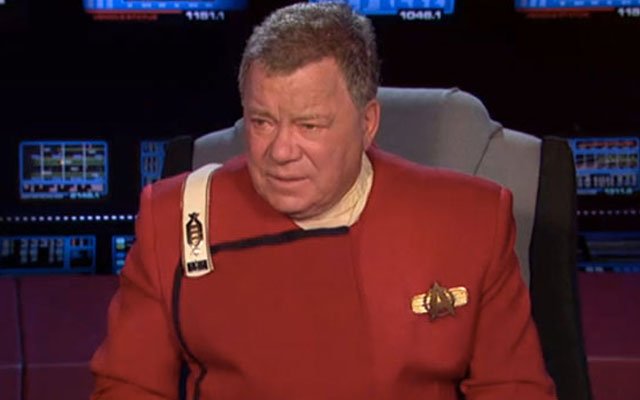 Shatner To Read ‘The Autobiography of James T. Kirk’ At SDCC

Only one of Star Trek’s two biggest names has appeared in the rebooted film series — Leonard Nimoy has been an integral part of both STAR TREK (2009) and STAR TREK INTO DARKNESS, while William Shatner hasn’t. Shatner, who’s cameo was dropped before shooting of the first movie, has been vocal about wanting to be a part of one of the films. It appears now that he may soon get a chance to appear again as Captain James T. Kirk one last time.

The script for the third film may include an onscreen appearance of Kirk and Spock — together for the first time in more than two decades, according to a report on Badass Digest.

The report mentions that the appearance would be tough to cut, as it’s plot-driven and an integral part of the overall story.

STAR TREK 3, directed by Roberto Orci, is currently slated for a summer 2016 release.

Shatner addressed the rumors via Twitter, saying that none has contacted him to be a part of the project and that it is currently “just rhetoric to cause hype.”

Let's talk ST. I don't know anything about the current gossip. Nobody has contacted me. Right now it's just rhetoric to cause hype.

Stay tuned to TrekNews.net for the latest news and developments related to the next Star Trek film.