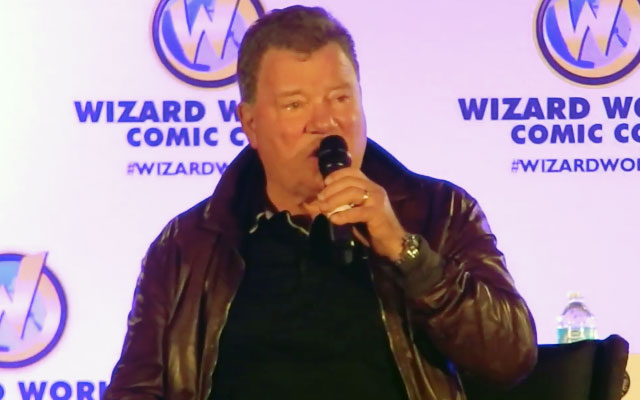 William Shatner: I'd Love To Do 'STAR TREK 3'

Just days after tweeting that he hadn’t been contacted by anyone about a role in Star Trek 3, William Shatner confirmed that he has indeed had at least one conversation about working on the film — with none other than J.J. Abrams.

According to Shatner, who appeared at the Wizard World Nashville Comic Con over the weekend, Abrams asked him to keep it a secret, so he hadn’t initially said anything about it.

He said that while recently visiting Australia, Abrams called from London, where he’s currently shooting Star Wars: Episode VII and told him that he was, “calling because the director of Star Trek, the next movie, has had an idea where you might be involved, so I’m calling to find out whether you would be interested.”

Shatner said he told Abrams, “It depends on what you do with the character, but I would be delighted.”

Shatner said he agreed not to tell anyone — not even his wife.

However, when he got home from Australia, he said, “It’s all over the Internet that the director had held an interview and said they want Shatner and Nimoy to be in the next movie. I thought ‘I’ll bet you J.J.’s frothing at the mouth at this point.’ So the news is out that they have an idea that they want Leonard and myself, they might want Leonard and myself in it. But I would love to do it. But how do you get me fifty years later into the movie? I mean how do you rationalize it. I know it’s science fiction, but even I couldn’t come up with an idea. So that’s the news on that.”

Check out a clip of Shatner’s appearance at Wizard World Nashville Comic Con, courtesy of YouTube user Jayson Bumbalough, below.

Stay tuned to TrekNews.net for the latest news and developments related to the next Star Trek film.