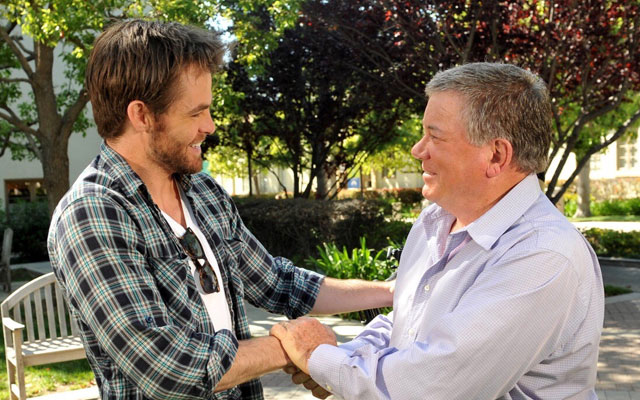 Last month, we reported on a possible role for William Shatner in Star Trek 3 that would reunite the original Kirk and Spock on screen for the first time since 1991’s Star Trek VI: The Undiscovered Country. Following the report, Shatner confirmed that he had been in touch with J.J. Abrams and folks over at Bad Robot (who are producing the film), during an appearance at Wizard World Nashville Comic Con.

Now, according to a report over on Badass Digest, Shatner may not only share some screen time with Leoanrd Nimoy, but also the new Captain Kirk — Chris Pine.

My sources are now telling me that not only will Shatner be in the movie, his scene will have him meeting Chris Pine. Also in that scene: Zachary Quinto and Leonard Nimoy. But if my sources are steering me correct this won’t be original timeline Spock – it’ll be future alt-timeline Kirk and Spock. Basically the scene will have Kirk and Spock interacting with their future selves.

Star Trek 3, directed by Roberto Orci, is slated to hit theaters in time for the 50th anniversary of the franchise in 2016.

Stay tuned to TrekNews.net for the latest news and developments related to the next Star Trek movie.