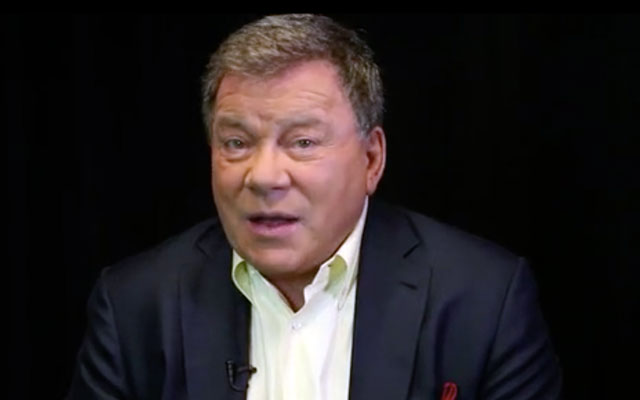 William Shatner Launches Kickstarter Campaign To Fund "Catch Me Up"

William Shatner has recently launched a Kickstarter campaign in hopes of funding his next project.

The 83-year-old actor hopes to fund the production of a new book, entitled Catch Me Up.

With Catch Me Up, Shatner hopes to help readers achieve “great things” at “any age” and teach them how to “leverage the new technology around us today to do anything” they want, “at warp speed.”

Greetings. I am William Shatner, and I have a confession to make.

I’ve been unemployed over 400 times in my life. I’ve had to reinvent myself over and over to get hired by TV shows, movie producers, and even by Priceline.com when I was 60+ years old.

I have another confession. Until just recently I HATED new technology. My “smart” phone made me feel stupid. My grandkids had to show me how to use Facebook. I even refused to even have an email account. You know what I found out? Without this know-how, I was becoming irrelevant…and a guy like me can’t afford to be irrelevant. So I did something about it.

I went on a mission to find people who had been laid off, lost careers, had been downsized and replaced by younger people with more tech skills; but who actually fought back and won!

On how the book helps people:

The biggest common denominator among the success stories in the book was that in every case these newly energized folks had discovered new technologies to create their new lives.

This is not just a book of “feel good” stories.

This is real life inspiration along with the vital tools and training needed to accomplish great things at any age!

That’s why we are connecting our website CatchMeUp.com to the book’s mission.

It’s a place for readers to get support, training, and even pair up with other members for jobs, business opportunities, and to share ideas.

This book and the website are labors of love. I really believe it can give hope, skills, and even community to a portion of our population that really needs it right now.

On why he went the Kickstarter route:

Frankly, lofty goals like this are not that appealing to big publishers. Going the traditional route would have required a number of sacrifices that would have ultimately hurt, and worse yet, alter the final product and the mission I have set forth for it…So, I have decided instead to embody the message and spirit of Catch Me Up and venture this fascinating new frontier—to seek out and win over the kickstarter community.

You can watch Shatner’s Kickstarter video below.