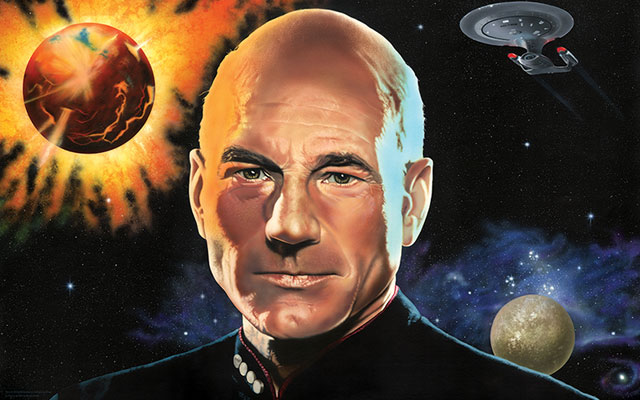 Under license by CBS Consumer Products, each of the new art prints are printed on acid‐free heavyweight coverstock.

The prints are priced at $25 each and available at byebyerobot.com.

You can check out all five posters below. 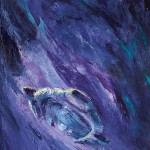 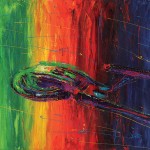 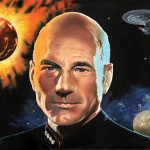 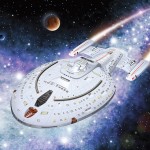 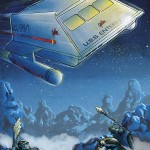 Returning artist, Jeff Foster, offers up two new paintings to all Star Trek collectors. The first, “Uncharted Territory,” is a 16”x24” bold and colorful depiction of the Enterprise NX‐01 in Jeff’s signature Modern Impressionist style. This ship is set against a rich rainbow background with detail and texture achieved through the use of a palette knife alone. His second print, “Defiant,” is a 16”x24” turquoise and violet portrayal of Deep Space Nine’s very own U.S.S. Defiant. This print shows the well‐known ship in flight with the turbulence of the region represented in the paint strokes behind it.
Our second returning artist, Mark Brayer, unveils his new 16”x24” “Galileo Seven” print for collectors everywhere. This design, the fourth in his line of vintage ships, features the Galileo Seven shuttlecraft from The Original Series episode of the same name. Utilizing his retro book‐cover style, Mark gives the viewer a detailed rendering of the terrain found by the away mission’s crew after their emergency landing, as well as an up‐close view of the planet’s confrontational inhabitants.

“Enthusiasts of Jeff’s and Mark’s artwork will be ecstatic to hear that they now have three new art prints to collect,” says Chris Wood, Co‐Founder of Bye Bye, Robot.

This release also features two artists who are new to the Bye Bye, Robot team. The first is Thomas Ziffer, who’s incredibly detailed painting “Engage” of Star Trek: The Next Generation’s Captain Picard is a stunning example of his skill with Realism and the airbrush. This 16”x24” art print features opulent colors throughout the vast space background, the celestial bodies, the realistic portrait, and even the Enterprise‐D. This captain’s portrait captures Picard’s likeness in striking detail, reminiscent of official nautical captain’s portraits of old.

The second new artist joining the team is Kevin Hopkins, presenting his intricate 18”x24” ship portrait of the USS Voyager. This print entitled “The Long Way Home” features a vibrant ethereal illustration of space behind the ship, as it is in motion, during its singularly important mission. This colorful art print is the first Star Trek: Voyager artwork offered by Bye Bye, Robot. It will be joined, next year, by several others for the series’s 20th anniversary.

“We’re thrilled to continually bring new artists, like Ziffer and Hopkins, into the Bye Bye, Robot family. This keeps our artwork group ever‐evolving…allowing us to bring collectors and fans new and exciting artwork on a constant basis,”

Under license by CBS Consumer Products, each of the new art prints are printed on acid‐free heavyweight coverstock and are available for $25 each. They are available for purchase today from byebyerobot.com at the price listed above, plus shipping.

Mark Brayer is a full time illustrator and cartoonist with his own studio, Lightspeed Studios, and has been working in the field for over 25 years. He has created a vast amount of art for greeting cards, comic books, illustrated characters, book covers and illustrations, magazines, corporate logos and branding, websites and graphic design. His unique style and versatility has led to a wide spectrum of endeavors.

Thomas Ziffer is a Florida artist who has been sketching and painting for most of his life. His lack of patience with the drying time of oil paints led him to other mediums, specifically acrylic paints. Working in the scenic business for major theme parks and television stations has honed Thomas’ painting skills and now most of his focus is on painting and creating new works utilizing the airbrush as his chosen medium.

Kevin Hopkins teaches painting, drawing, and Photoshop. He worked as and artist for ‘Battle Star Galactica’ comics and designed a medallion that headed into space on the ill‐fated ‘Challenger’ space shuttle expedition. He is a winner of the international Illustrators of the Future Contest. Kevin worked on comic strip work in Hollywood CA and later worked for Warner Brothers Studios on such titles as The Matrix, Looney Toons, Back in Action, Last Samurai, the first four Harry Potter films, and Batman Begins, and many more.

Founded in 2011 by Charity and Chris Wood, Bye Bye Robot is an independent publisher of art. Currently, they are a licensed seller of original works of art based on all of Gene Roddenberry’s live action Star TrekTM TV series plus Original Series and Next Generation movies. Bye Bye Robot is dedicated to creating deeply immersive, visually spectacular pieces of art that will amaze and inspire viewers for generations.