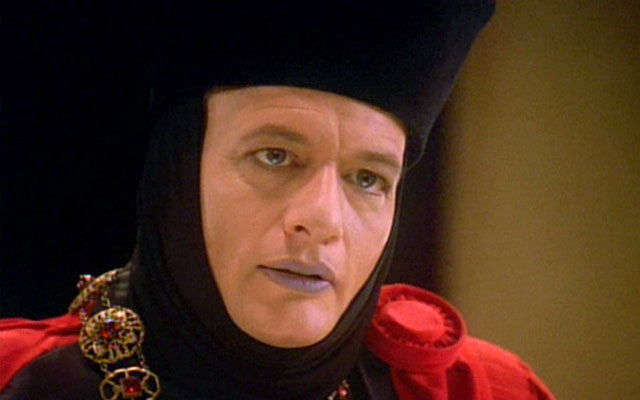 John de Lancie Talks "All Good Things..." and the End of TNG

With this month’s release of Star Trek: The Next Generation‘s seventh and final season on Blu-ray, John de Lancie, who appeared multiple times as Q, recently reflected on his time as the omnipotent character, the series finale “All Good Things…” and the everlasting impact of the series.

When asked if he would have believed the impact TNG would have on his life and career twenty years ago, de Lancie said:

Of course, I’m omnipotent, right? I knew about all of this stuff. No. No, no, no. No, no. Star Trek is the gift that keeps on giving. It is the touchstone for what every other show would like to have as their legacy — and it’s quite extraordinary. And it’s made even more so when you think that, for TNG, I only did seven or eight episodes.

The technology is amazing. I have a large television and it’s a little startling. It really looks terrific. I wish that technological could extend into real life so that I would look somewhat like I did back that, but that isn’t the case. And I do think the episodes, especially “All Good Things…,” really hold up. That was a difficult one when you consider that it was so highly anticipated. I think it delivered, other than the fact that they said “anomaly” too many times. I thought it was a really, really good show.

While filming the series finale, the first TNG film Generations was already in production. De Lancie talked about how that parallel was viewed on set.

You know what? I was outside of that loop. I wasn’t in Generations, so for me, “All Good Things…” was THE show. And, for me, because my job is somewhat myopic, in a way… I’m only tracking what I’m doing, and even then I don’t have real control of it… I looked at each scene as an opportunity to polish up a facet that had been etched already or lay down a new facet on my little Q stone. So, in that respect, while I didn’t have a lot to do, I felt each scene progressed my character, the arc and the story in a really nice way. So I was happy about it then and to this day, looking at it again, now, I still go, “That all holds up.”

Q’s appearance in “All Good Things…” acted as the perfect bookend to the series, which began with “Encounter at Farpoint” in 1987. When as if he was surprised to get the call to do the finale, De Lancie said:

I didn’t know whether or not I was going to be involved. As I’ve explained in the past, (with acting) it’s somebody else’s dinner party. You can spend a lot of time hoping you’re going to get invited and wondering why you’re not. In my case, I knew that there’d be a dinner party that was called the last episode, and I didn’t know if I’d be involved. Then I got a call saying, “You are going to be involved,” and I said, “Oh, great.” Then, like all the other shows that you do, you wait – anxiously in this case – to find out, “Am I going to really be happy being involved in it?” For me, I think the episodes with Q worked best when the story was really big, and this was a really big story that my involvement meant something to on a philosophical level. It was a weighty script in that respect, so I was just really pleased.

De Lancie recently appeared on an episode of The Mentalist and is working on a film called Mind Puppets.

The seventh season of Star Trek: The Next Generation

are now available on Amazon.

In this article:Interview, John de Lancie, Star Trek: The Next Generation