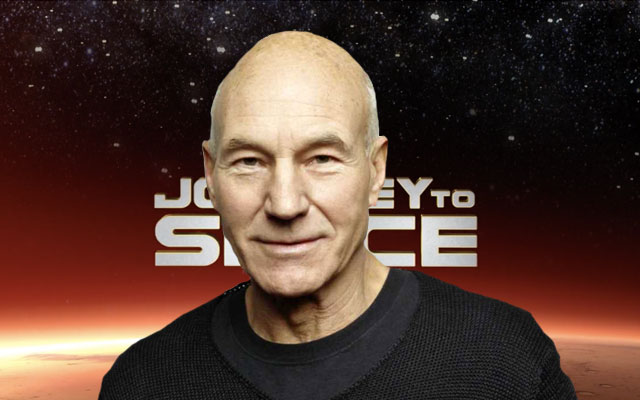 Patrick Stewart, best known for playing Captain Jean-Luc Picard on Star Trek: The Next Generation, is set to lend his voice to Journey to Space, a new theatrical film which delves into the concepts, hardware and people carrying out the next generation missions to bring human beings further into space.

“It was a delight to contribute to this exciting film project,” Stewart said in a statement. “[Journey to Space] will let audiences young and old know how surprisingly close we are to sending humans into deep space.”

Journey to Space will be released to select theaters in next month. The film is being presented by the Boeing Company and Toyota and produced by K2 Communications and Giant Screen Films.

“No longer science fiction, a human mission to Mars is in the planning stages, and major steps are being taken to make it a reality within a generation,” Bob Kresser, chief executive officer of K2 Films, said. “Our goal in making this film was to tie together the actual hardware being built with the tremendous planning under way that will make the next steps in space exploration the most far-reaching in our history.”

“Patrick’s narration is the perfect icing on our space-story cake,” Mark Krenzien, the director of “Journey to Space,” said. “Everyone in the studio was beyond impressed by his enthusiasm for the project and his dedication to every nuance and detail.”

You can watch the trailer below.