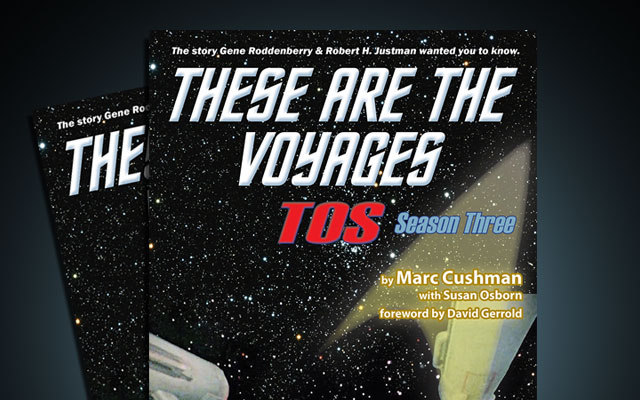 The third installment of Marc Cushman’s acclaimed book series, These Are The Voyages: TOS Season Three, is now available.

Like the previous two, the book takes readers on a behind-the-scenes journey of the making of Gene Roddenberry’s Star Trek.

Season Three takes you back in time for the final season of this iconic television show to production offices, the writers’ room, onto the sound stages, and in front of your TV sets for what many thought would be Star Trek®’s final voyage. Included are hundreds of memos between Roddenberry, the producers and staff, production schedules, budgets, fan letter, behind-the-scene images, and the TV ratings. You’ll find out the real reason Star Trek® was cancelled.

“Perhaps the reason I like Season Three the most is that it has more new information – more surprises – than even the other two. And that says a great deal, because Season One and Two were filled with new insights. With all three seasons, I experienced the thrill of discovery as I did my research, and I was happy to know that others like myself could experience it through the books. But I always had more questions about Season Three – about the choices that were being made. I wanted to know what they were thinking. And, just as important, how they felt. And now I know. And you will soon know too.”

“These Are The Voyages” TOS – Season 1

“These Are The Voyages” TOS – Season 2

“These Are The Voyages” TOS – Season 3