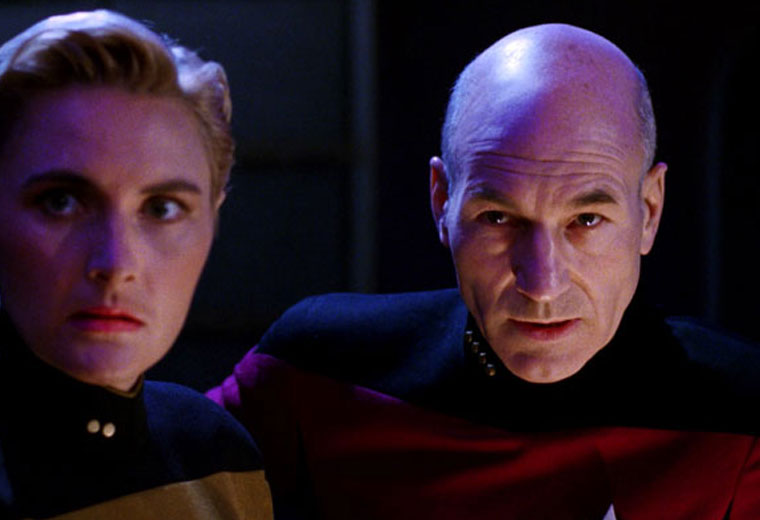 Time travel. Alternate universes. Tough moral dilemmas. Character driven narrative. In many ways, “Yesterday’s Enterprise” epitomizes what many fans love about Star Trek and distills it in a singular, memorable episode that often tops many lists as an all-time favorite episode of any of the five Trek live-action series. Airing in the third season of Star Trek: The Next Generation on February 19, 1990, the episode has reached its 25th year anniversary (How scary is that?) and has recently been re-mastered for the TNG Blu-Ray sets. This review is all about re-evaluating how the story has held up after a quarter of a century. The verdict? It’s safe to say that it has accomplished this successfully, but not perfectly. 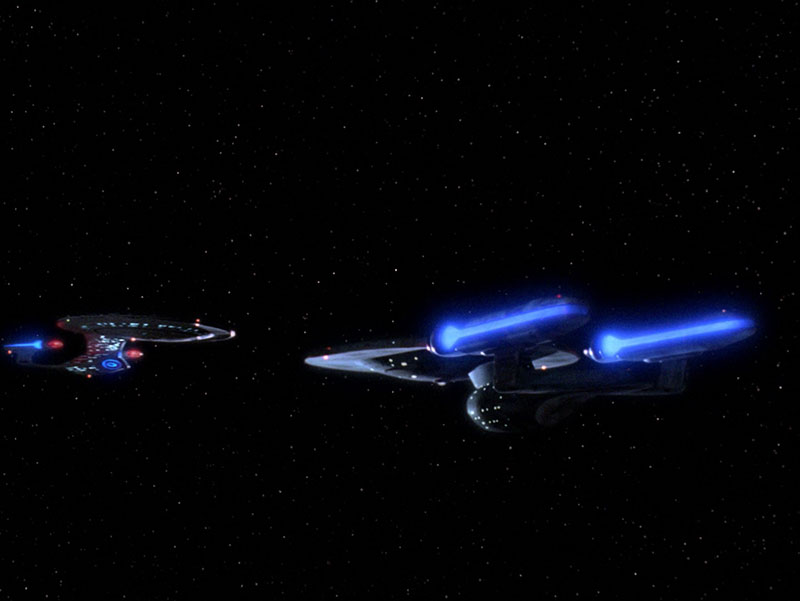 The episode starts off with a familiar setting with Guinan introducing Worf in Ten-Forward to his now-famous drink of choice: prune juice. The brief conversation that occurs between the two about Worf’s reluctance to seek intimate “companionship” with non-Klingon women (because they are “too fragile”) is, of course, supremely ironic to long-time Trek fans (considering his relationships later on with Deanna Troi, Jadzia, and Ezri Dax). But their conversation is cut short by a strange phenomenon occurring outside the observation window. Worf is called to the Bridge and Guinan is clearly disturbed by what she is seeing. On the Bridge, the crew has identified the phenomenon to be a sort of temporal rift. As they continue to attempt to identify the exact nature of the rift, a ship that appears to be a Federation starship emerges from the abyss. At this moment, everything that we as an audience find familiar about The Next Generation instantly changes. Only there moments ago, Counselor Troi is now nowhere to be found. Not only is she gone, but her and Commander Riker’s seating positions alongside Captain Picard are completely removed. The bridge itself has taken on a darkened militaristic feel and the Captain’s chair is literally raised above all else’s. Wesley Crusher is now sitting permanently in the helm position, no longer a child prodigy, but as a seasoned and hyper-competent military officer. But the most surprising change of all: Tasha Yar (who was killed in the first season episode “Skin of Evil”) has now replaced Worf as the tactical officer. It is Yar who informs Picard that the ship that just emerged from the rift shares the same name as their ship, USS Enterprise, but is of an earlier lineage (NCC-1701-C). Down in Ten-Forward, Guinan is immediately perturbed by the changes she sees: she is surrounded by Starfleet officers, but they are all wearing different, more militarized uniforms complete with sidearms. 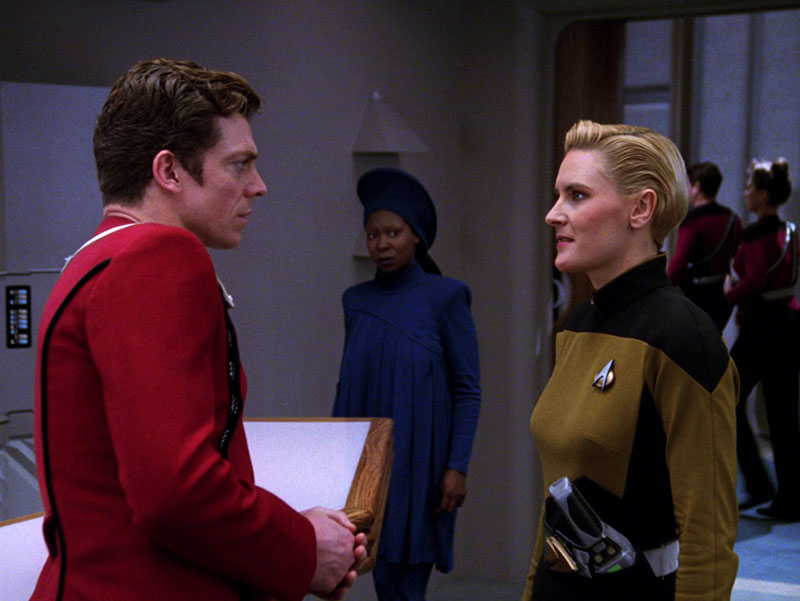 Picard removes all further doubt that this is a new alternate universe when he begins his log, not with his usual “Captain’s Log, Stardate”, but instead “Military Log, Combat Date”. He even refers to the Enterprise-D explicitly as a “battleship”. The crew quickly surmises that the Enterprise-C is indeed the predecessor to their own ship, but according to their records, the ship was lost with all hands years before. Clearly uneasy at the implications of such a discovery, Picard orders Riker and the away team to observe strict silence and not to inform the other crew of “when” and “where” the Enterprise-C is. Since he is no longer a diplomat and an explorer, a military pragmatism infuses Picard’s character. It is abundantly clear that Riker is chafing under Picard’s curt bluntness, in a way that really foreshadows Riker’s experience under Captain Jellico in Season 6’s outstanding two-parter “Chain of Command”. Ultimately Picard’s attitude towards Riker (he never once refers to him by the familiar “Number One”, but only as “Commander”) is perhaps the most poignant reminder that this is a starkly different universe than we are accustomed to.

The Enterprise-C crew eventually realizes that they too are in a different universe, when Captain Rachel Garrett (wonderfully played by Tricia O’Neill) demands an explanation. Picard is then forced to reluctantly to divulge the real situation. The Enterprise-C has been sent forward 22 years into the future, a future in which the Federation is fighting and losing a long protracted war with the Klingons. But there’s a crucial difference. While Garrett recalls engaging in a fierce battle with the Romulans over the Klingon colony at Narendra III, the alternate universe in which Picard inhabits has no record of this battle happening. This battle would form the crucial inflection point of the entire episode. Indeed, Data later confirms what the audience has already suspected. If Captain Garrett and the Enterprise-C had remained to fight the Romulans and perish in an act of sacrifice on behalf of the Klingon colony, instead of entering the rift, that selfless act might have averted the devastating war in which Picard and crew are currently embroiled.   The use of Guinan to act as an audience surrogate in emphasizing that the events of the alternate timeline are “not the way they’re supposed to be” becomes problematic at this point. Throughout the series, we’ve never really delved into the background of Guinan, outside of a few tantalizing references that she is of part of an ancient mythical species called the El-Aurians and that she possesses a relationship with Picard that goes “beyond friendship, beyond family”. She is literally described by Q as an “imp”. The unfortunate truth is that in many ways Guinan, as a character, subscribes to the trope of the “Magical Negro”. Michael Poteet over at his blog “SciFi Christian” has a terrific analysis of just how problematic the “Magical Negro” trope is and how uncomfortably close Guinan as a character adheres to this mold. He highlights film critic Rita Kempley’s breakdown of this trope, specifically that “Pawns help white people figure out what’s going wrong and fix it. It isn’t that the actors or the roles aren’t likable, valuable or redemptive, but they are without interior lives. For the most part, they materialize only to rescue the better-drawn white characters. ” As Poteet notes, this description reminds him of Guinan and I can’t help but agree with that assessment.

However, taken as a whole, I do enjoy Whoopi Goldberg’s overall portrayal of Guinan, especially her relationship with Ro Laren in later seasons. It’s a testament to her skill as an actress that the audience, including myself, develops a strong connection and fondness for her despite being “only” a recurring character. But Star Trek, like any piece of science fiction or popular culture, doesn’t exist in a vacuum, and it can’t be ignored that the character of Guinan, separate from Whoopi Goldberg’s portrayal of her, is problematic. And in “Yesterday’s Enterprise”, the deficiencies in how her character was written is on full display, especially with the lines that only serve to highlight her “otherness” and her “magical abilities” (i.e. her intimation of vague feelings and intuition to Picard that this timeline isn’t the correct one). 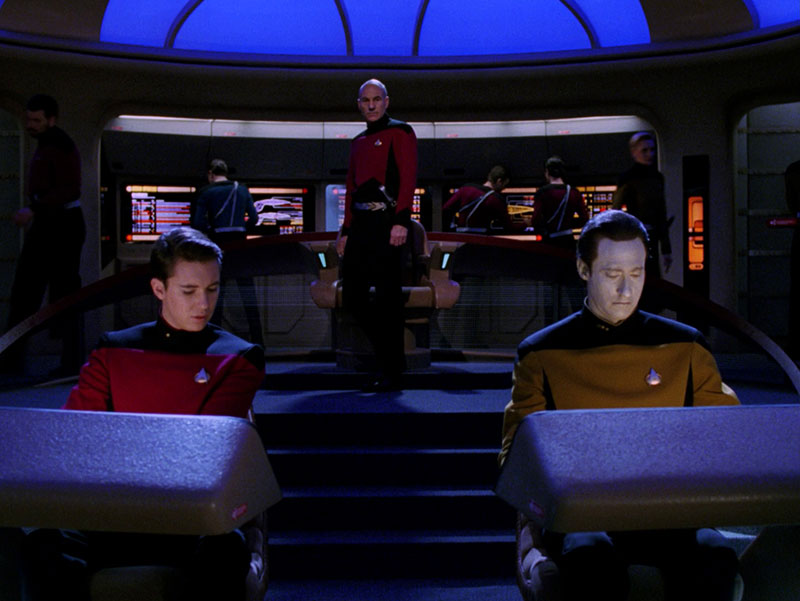 Going back to the plot, the central conflict that the episode must resolve is whether or not the Enterprise-C should go back into the temporal rift once they’ve realized they’re in the wrong time. Initially, Picard is reluctant to send back them back because he knows that it is an all-but-certain death sentence. But there is a chance, as explained earlier by Data regarding the rift’s “symmetry”, that if they do go back, the Enterprise-C’s sacrifice on behalf of the Klingons would ensure that the war would have never taken place. It’s a riveting narrative that combines the type of moral dilemma that Star Trek, at its best, excels at telling. O’Neill does an excellent job projecting the type of steely determination that one expects from a captain of the Enterprise (and certainly that’s no small feat when you’re playing against Patrick Stewart). Alexander MacDonald (aka Shooter McGavin!) who plays the C’s helmsman, Lt. Richard Castillo, also performs ably, picking up Garrett’s gravitas in leading the crew when she becomes an unfortunate casualty during a surprise Klingon attack. 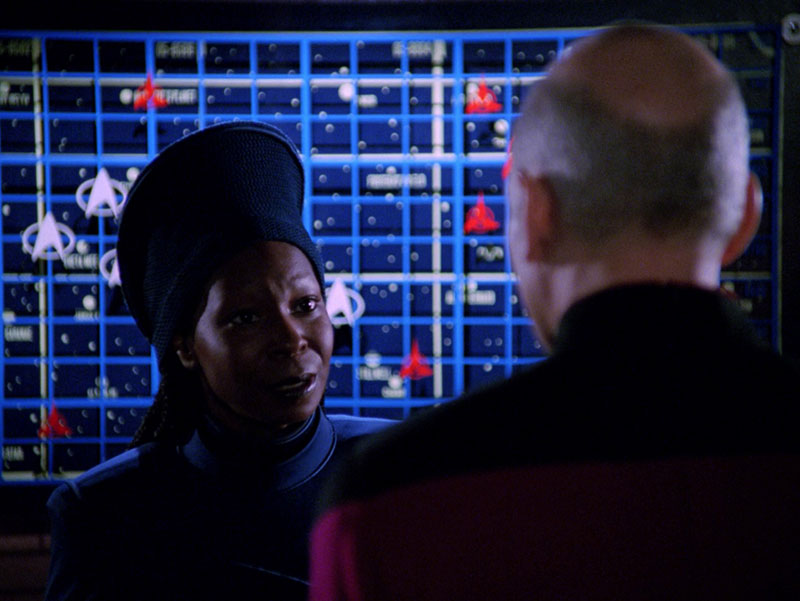 This brings us to Tasha Yar. Denise Crosby returns in her role as Security Chief in this episode and she does a fantastic job playing the character with depth and versatility. This allows her to play the character both as a no-nonsense, highly competent tactician but also as a character that’s solely not defined by her job. Her relationship with Castillo is one of the highlights of the episode because of how heartfelt and genuine their bond felt, despite only having the course of one episode to develop their relationship. Although I must admit, it’s a little awkward (but amusing!) when Castillo states that only his mother calls him Richard and then proceeds to flirtatiously tell Tasha that he would prefer it if she also call him that. Indeed, the role of Yar here is to provide an additional layer of pathos and emotional attachment for the audience when Castillo is set to take the ship back into the rift. However, Tasha’s decision to join Castillo and the Enterprise-C on their trip back into the rift would have been far stronger if it would have been uncoupled from the episode’s reliance on Guinan to provide vague promises that she would die an “empty” death in her timeline. Indeed, just how much more powerful would the episode be if it was Garrett who originally decided that they needed to return over the objections of her own crew and in the process convinced Picard and later Castillo and Yar of the necessity of completing the Enterprise-C’s mission? It would have allowed for far greater agency on the parts of the characters as opposed to serving the need to hit the magic reset button by the end of the episode. 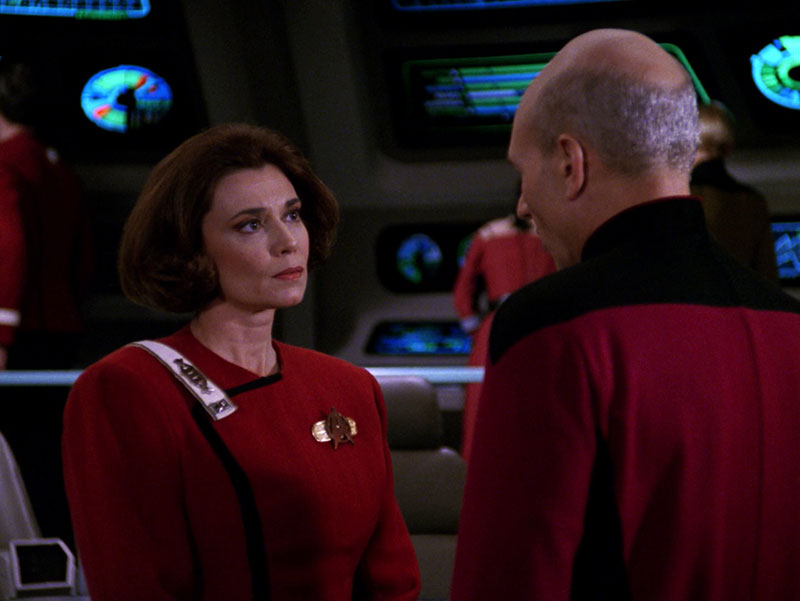 But all in all, despite these criticisms, “Yesterday’s Enterprise” still holds up a quarter of a century later because it manages to encapsulate what fans most know and love about Star Trek: within an appropriately sci-fi setting of time travel and alternate timelines, tough moral dilemmas are resolved through the sacrifice and heroism of relatable characters. It also doesn’t hurt that the space battles and effects are still riveting as they were back in 1990. Thus it’s no surprise that the writers lamented in hindsight that “Yesterday’s Enterprise” should have been saved for TNG’s cinematic outings or when Roberto Orci admitted to using this storyline as inspiration for 2009’s Star Trek. While not perfect, this episode still succeeds in fulfilling Picard’s final exhortation to his crew: “Let’s make sure that history never forgets… the name… Enterprise”.

Will Nguyen lives in the Boston area. You can tweet him at @Will_Nguyen. He’s also a regular contributor to Warp 5, a weekly Enterprise show on Trek.fm, a dedicated podcast network that talks about every aspect of the Trek universe from television, the movies, literature, and everything in between.