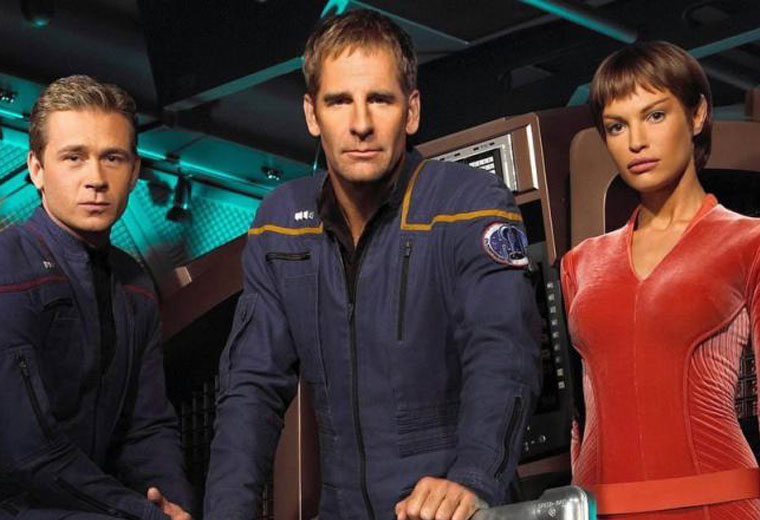 They say “absence makes the heart grow fonder”. As much as this statement is true in life, it certainly is true for Star Trek, specifically Trek on television. This May, it will have been a decade since we have last seen Star Trek broadcast as a weekly series. On May 13th, 2005, the Enterprise episode titled “These Are The Voyages…” aired and it capped off an interesting period in Trek fandom because it not only marked the end of Enterprise after only 4 seasons, but it also began the period of drought of Trek on television that currently exists today.

But something has happened in these intervening 10 years which has caused a significant change in fandom: more and more people are rediscovering Enterprise and reconsidering its merits. This article will examine not only why this is happening, but also why you should give it a chance if you haven’t already. 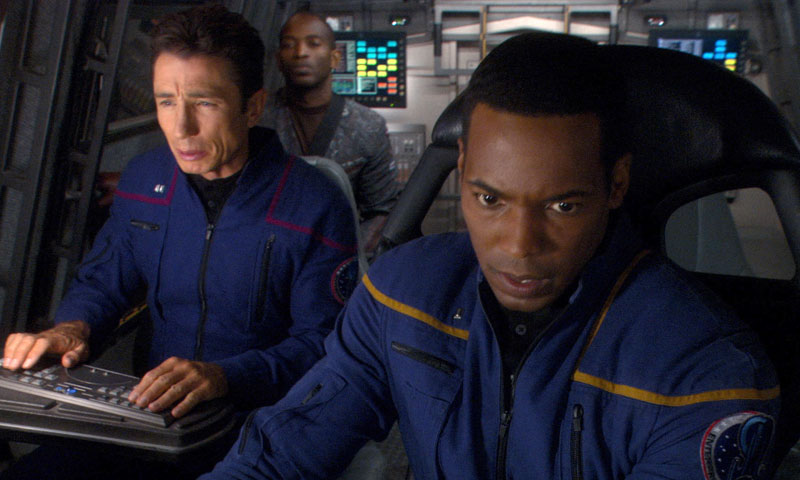 Two Factors What Worked Against Enterprise

1. The Nature of Media Consumption Was Different Ten Years Ago

With the advent of on-demand, video streaming services such as Netflix, Amazon Instant, Hulu and the proliferation of user-friendly media devices such as the Roku and Google Chromecast, the entire Star Trek television canon (The Original Series, The Animated Series, The Next Generation, Deep Space Nine, Voyager, and Enterprise) is now available to dedicated and casual fans in a way that’s accessible as never before. This type of a la carte watching really allows for focused “binge” or “marathon” viewing and it’s perfect to really get the taste of what a show is and if necessary, allow people to skip parts they don’t like. 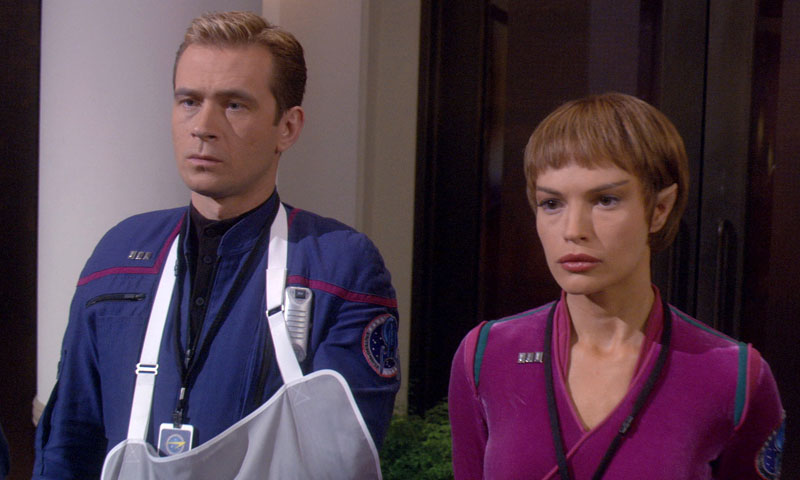 Unfortunately for Enterprise, it never got this luxury in its first run on television. Arguably it got the worst of both worlds. In 2000, when its pilot episode “Broken Bow” aired, the television world was only just leaving the syndication model that had dominated much of 90’s era Star Trek. The Next Generation and Deep Space Nine had been the bread and butter for syndicated networks and Voyager had just finished its seven year run in May of 2001 anchoring Paramount’s “United Paramount Network” or UPN. But while Voyager had the luxury of UPN being a fresh newcomer in the eyes of audiences, by the time of Enterprise’s launch, the network was already something of a faded afterthought among TV networks.

With UPN facing plummeting ratings due to its identity crisis and reluctance to continue its reputation as a sci-fi oriented network after seven years of Voyager, it routinely bumped Enterprise into the worst timeslots (Friday night at 10 pm, for example in some markets) in favor of mediocre sitcoms and pro wrestling. No wonder then Enterprise often had to work at a significant disadvantage to get viewers from its very onset.

2. Star Trek Wasn’t The Only Game in Town Anymore

When The Next Generation debuted in 1987, it arguably revitalized not only Star Trek on television, but it also revitalized the entire American science fiction genre. There really was no competition for the type of sci-fi loving audience that routinely tuned into TNG. This would gradually begin to shift with Deep Space Nine and Voyager, which faced increased competition for viewers with the advent of shows like Babylon 5 and the X-Files, but Trek arguably still came out on top. However, with the start of Enterprise, two factors began working against it. First, Enterprise launched in September of 2001, a mere three months after Voyager had ended, to officially become the fifth live-action Star Trek series. Historically, concurrent or adjacent Trek series have never been a problem. Deep Space Nine launched to great fanfare alongside TNG’s final two seasons and Voyager similarly debuted to great fanfare during DS9’s first two seasons. However, by the time of Enterprise, that well had begun to be tapped dry. With four TNG movies and two additional series under its belt, Star Trek just didn’t seem as fresh as it used to in the early 1990s. This fatigue also coincided with a boomlet of outstanding sci-fi shows such as Battlestar Galactica, Firefly, and Farscape that were also airing at roughly the same time, which provided additional competition for Enterprise that just didn’t exist for the other Trek series. 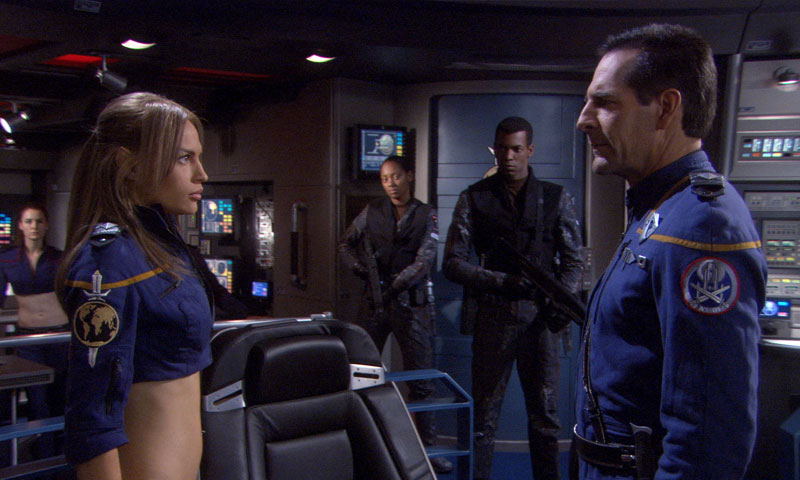 For better or for worse, the new J.J. Abrams Star Trek movies have literally changed the trajectory of the Trek franchise. 2009’s Star Trek was unequivocally a hit with both critics and fans alike, while 2013’s Into Darkness, while still a financial success, was received more tepidly by the fan base. However, this takes nothing away from how these two movies (and the upcoming third film in 2016) have rejuvenated the franchise since 2002’s ill-received Nemesis. New fans are discovering Trek for the first time through these movies and are primed in a sense to consume more stories within this universe. Since all five Trek series are so easily accessible to be streamed on-demand, the barriers to entry for new viewers to watch are so low compared to older fans who had to either stay up late to catch their episode in syndication or record it manually with a VHS tape. Couple this with the fact that Enterprise is the most visually polished of all of the Trek series and it’s easy to see why audiences who were introduced to Trek through the slick and modern aesthetic of the Abrams movies would be attracted to the advanced visual styling of Enterprise.

Ten years is a long time. Ten years is certainly a long time for a franchise not to be on television, particularly one such as Star Trek, which has always thrived in this medium. Doug Drexler, the designer of the NX-01 Enterprise, had a wonderful quote about the series’ resurgence: “There is an entire generation of fans out there who are rediscovering this show that have no idea they’re supposed to hate it.” With the passage of time, many fans’ preconceptions of what a prequel Trek series should be is being replaced with more realistic and reasonable expectations. And when viewed through this lens, I think both old and new fans alike are rediscovering and discovering, respectively, that there are many aspects of the show to appreciate. 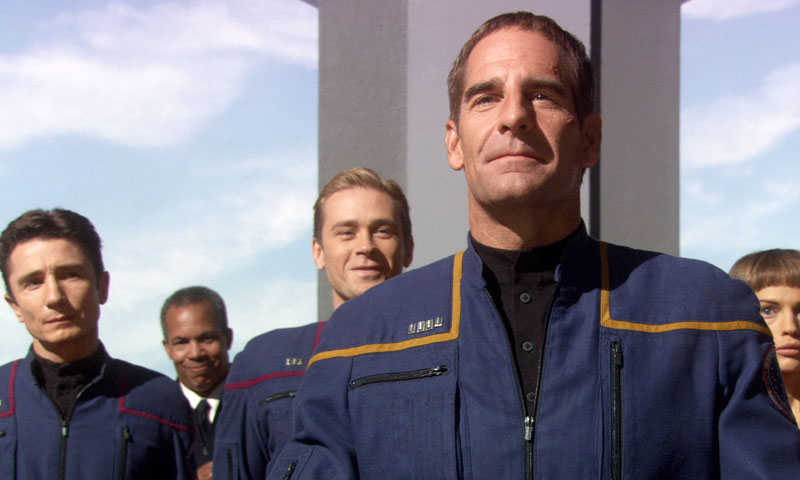 Despite these new factors working in its favor, I’m certainly not saying that Enterprise is a perfect show. From its very inception, there were clear signs of friction between the direction the studios wanted to take the show and where the writers wanted to go. This is particularly evident with the entire Temporal Cold War arc. Furthermore, as the first Trek series made in the 21st century, it demonstrated very problematic tendencies to marginalize its only two main characters of color (Hoshi and Travis), over-sexualize its female characters (most egregiously with T’Pol), and failing to really represent humanity’s diversity by backing away from making Malcolm Reed Trek’s first openly gay character.

However, Enterprise does do a lot right. In many ways, the entire mission of the NX-01, from its crew to its design to its atmosphere, evokes a sense that this is really humanity’s first real deep space flight. They’re still learning the ropes, they’re going to make mistakes, they’re not yet the polished Starfleet we all know and love in the future. But most importantly, it begins to lay the foundation for what we will later see in all of Star Trek. We finally see Andorians and Tellarites for the first time since The Original Series. We delve further into Vulcan culture, society, and mythology than we have ever before. We finally see the foundation being laid for the formation of the Federation. And in the process of doing this, Enterprise produces some of the best Star Trek episodes we’ve seen since the end of Deep Space Nine.

Through a combination of time, distance, and the changing nature of media consumption and the franchise itself, Enterprise is experiencing a revival of sorts from both old and new Star Trek fans alike. And I, for one, am glad to see that more and more people are discovering this fact each and every day!