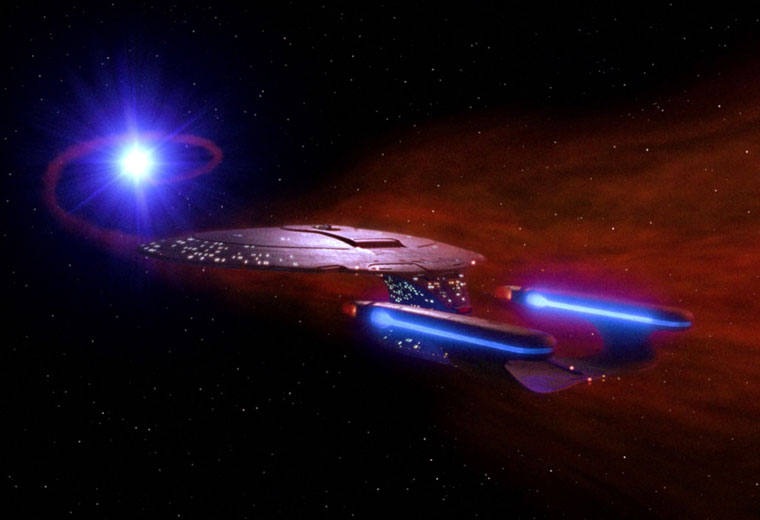 If there ever was evidence that the science fiction gods really do exist, they provided the best evidence this past Monday when CBS Studios announced the return of Star Trek to television in January 2017. To quote another “Star” franchise, this would be a day long remembered. Without a doubt, Star Trek has always thrived on television and fans have been eagerly awaiting Trek’s return to television for a decade, since Star Trek Enterprise last left the airwaves in 2005. Of course, there have been 12 movies (and counting, if you include next year’s Star Trek Beyond), but television has always been the natural home for Trek. The five live-action television series (and one brief animated series) is testament to that and this pantheon will soon be joined by the sixth live-action incarnation.

To say that this news has caused reverberations throughout the Trek fandom would be an understatement. Some fans have objected to the unique distribution arrangement that CBS announced for the show, an arrangement that would launch the show on a broadcast network, but then would exclusively use CBS’ “All Access” streaming service to primarily air the show. Viewers would thus have to pay $5.99 a month to view the new Star Trek series, in addition to other CBS offerings.

Other fans have expressed reservations over the showrunner for the new series, Alex Kurtzman, who has been named as the executive producer. Kurtzman, along with writing partner Robert Orci and director JJ Abrams, were the driving forces behind 2009’s Star Trek reboot, as well as 2013’s Star Trek Into Darkness. Fans have been very divided on the new direction of the “JJ-verse” films and have extrapolated their concerns on this new venture. Although CBS stated in it’s press release that the new series would not be directly related to 2016’s Star Trek Beyond, it is still unclear which timeline, setting, and characters the series will ultimately feature.

It’s fitting that Back to the Future Day (October 21, 2015) was just a few weeks ago because this is the ultimate time travel moment for Trek fans. Back in 1986, on the heels of The Voyage Home’s smashing box office success, Paramount greenlit a return to television for Trek, the first since The Original Series (TOS), in the form of The Next Generation (TNG). Although The Next Generation is now widely praised for revitalizing the franchise, it was hardly the surefire hit when it first debuted. The first two seasons were rocky at best and there were many fans at conventions that vowed Jean-Luc Picard would never be their captain. Given time, TNG eventually found its footing and helped usher in the high-water mark of Trek during the ‘90s. Especially in blazing a new television distribution model through syndication.

Similarly, Star Trek is now once again at a crossroads. Television has changed dramatically in the past two decades. On-demand streaming services like Netflix, Amazon Prime, and Hulu are the wave of the future. It seems fitting that Star Trek would return to television in a format that would embrace this new approach, much like how syndication was pioneered with TNG. Personally speaking, $5.99 a month is a small price to pay for new Star Trek. As for the creative direction, it’s much too early to tell. Although I was not the biggest fan of the JJ-verse movies and some of his other credits like Transformers: Revenge of the Fallen, Kurtzman has proven himself to able to showrun a quality science fiction program through his work on Fringe. And as important as the showrunner is, it’s as equally important who the writers will be. And since we have no word on that yet, it is far too early to judge how the series will ultimately be written.

It is only natural for fans to be passionate about the things they love and there aren’t more passionate fans in all of sci-fi / geek / pop culture than Trekkies. To be sure, I have my own aspirations for the new series as well. Star Trek has always been at its best when it’s broken barriers. It’s stagnated a bit as of late in this regard and that is why I really hope that this new series will actually be bold again and feature a LGBTQ main character (which is long overdue) and a plurality of well-written female characters and characters of color (which it has not quite accomplished with the JJ-verse movies or with Enterprise, Trek’s last TV outing).

Fans should debate and discuss with fervor what new possibilities this series might bring. We wouldn’t be fans otherwise! I was not alive in 1986 to experience the first wave of “Trek back on TV” revivalism, so I am cherishing every moment in which this series truly is new, unknown, and part of that great “undiscovered country”. But amidst all of that talk about timelines, continuity, and distribution models, it is important we never forget just how exciting Star Trek being back on television can be, just as it was more than two decades ago.