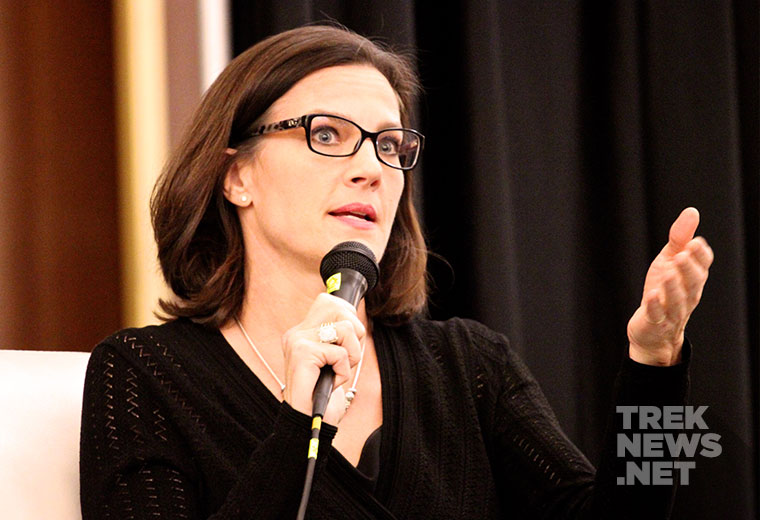 Michael Dorn, Marina Sirtis and Gates McFadden from Star Trek: The Next Generation, along with Terry Farrell from Star Trek: Deep Space Nine, appeared on stage last weekend at Rhode Island Comic-Con for a special “Faces of Star Trek” panel, hosted by actress Clare Kramer from Buffy the Vampire Slayer.

While Dorn, Sirtis and McFadden worked together on TNG, the Worf character, played by Dorn, bridged the gap between the two series, when he was added to the cast of DS9, in the show’s fourth season.

Dorn discussed how different the atmosphere was on Deep Space Nine compared to that of The Next Generation, saying:

“The transition was kind of interesting, because you came from a place, you know — not utter chaos — it wasn’t chaos, it was just so much fun and laughing on the set, as we got directors and co-stars. For us, you have to sink or swim with us. It was either you got us and you joined in with the fun and when they said ‘action’ we were rock solid, but after they said ‘cut’ it was all over the place.”

“To me it wasn’t chaos, it was just funny. I was bad the second season because people would just crack me up all the time. I could barely get through a line, because I’d be looking at her (Marina Sirtis) and Gates (McFadden), I’m looking at Patrick (Stewart) — everybody was just…”

[Laughter breaks out as McFadden’s phone starts to ring]

“The transition over there (the Deep Space Nine set) was… I go over there and I’m like ‘Hey guys, how are you doing?’ and it was quiet. I’ve got to say that after about six months they loosened up. I’m not sure if that was a change in the atmosphere.” 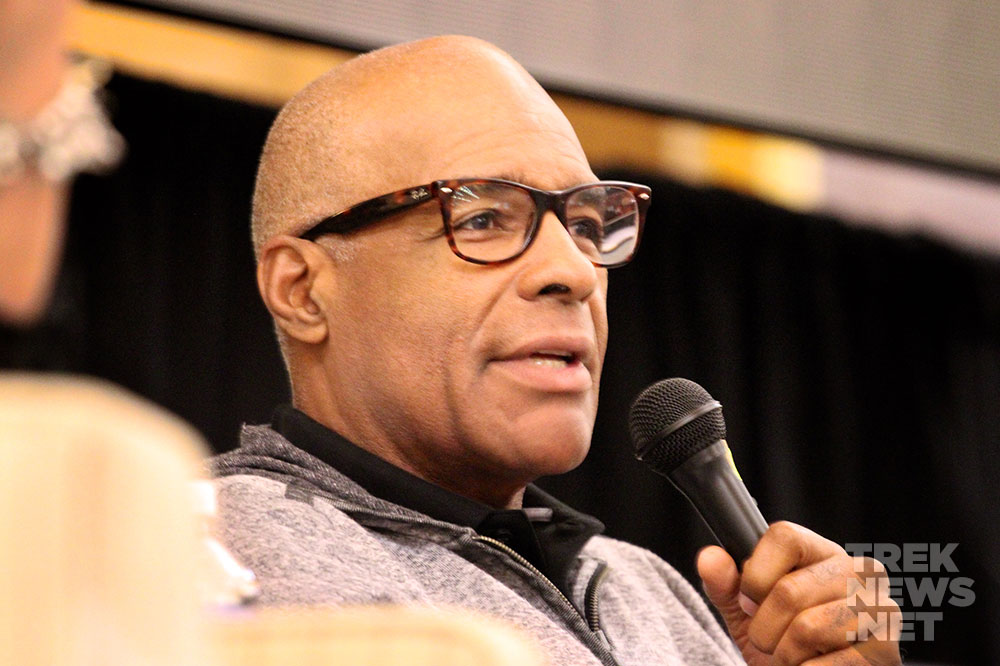 Joining the cast in the fourth season, Dorn was thrust into an ensemble that had already worked together for three years. The character added a new dimension to the show and allowed viewers to see the personalities through the eyes of the “Worf” character.

“I loved working with everybody on the show. The whole Jadzia (Dax) thing happened later on, but it was fabulous.” Dorn remarked.

After years of playing their individual characters, the stars of TNG felt like they knew them and understood how they would react to certain situations. Sirtis talked about how as actors they would influence the writers to occasionally change the characters’ lines.

“Patrick (Stewart), Brent (Spiner) and Johnny (Frakes) figured it out. What you had to do as — Brent and Patrick or Brent and Jonathan would double-team. What they would do is call the producers and say ‘You know, this doesn’t really sit right. What if I said this?’ and Rick (Berman) would go ‘Absolutely not’ and put the phone down. So then Patrick would call and he’d say ‘You know, I’m not really happy with this line.’ and Rick would tell him the line that Brent said, like it was his idea.”

There wasn’t much of me in her, I don’t think.

After playing the characters for seven seasons of TNG and four feature films, Sirtis, Dorn, McFadden and Farrell (who played Jadzia Dax on DS9 for six seasons) were asked how their own real-life personalities were affected by the roles.

“I’ll go first, because I’m nothing like my character.” Sirtis said. “What a surprise, you’re all shocked.” she joked. “There wasn’t much of me in her, I don’t think. Except for the fact that people do tell me all their stuff. They do confide in me a lot and I don’t know why.”

“I don’t either, because you…”

Farrell chimed in. “You repeat it wrong.” she joked.

“People tell me their stuff and I can’t keep my mouth shut, as you can probably tell.” Sirtis said. 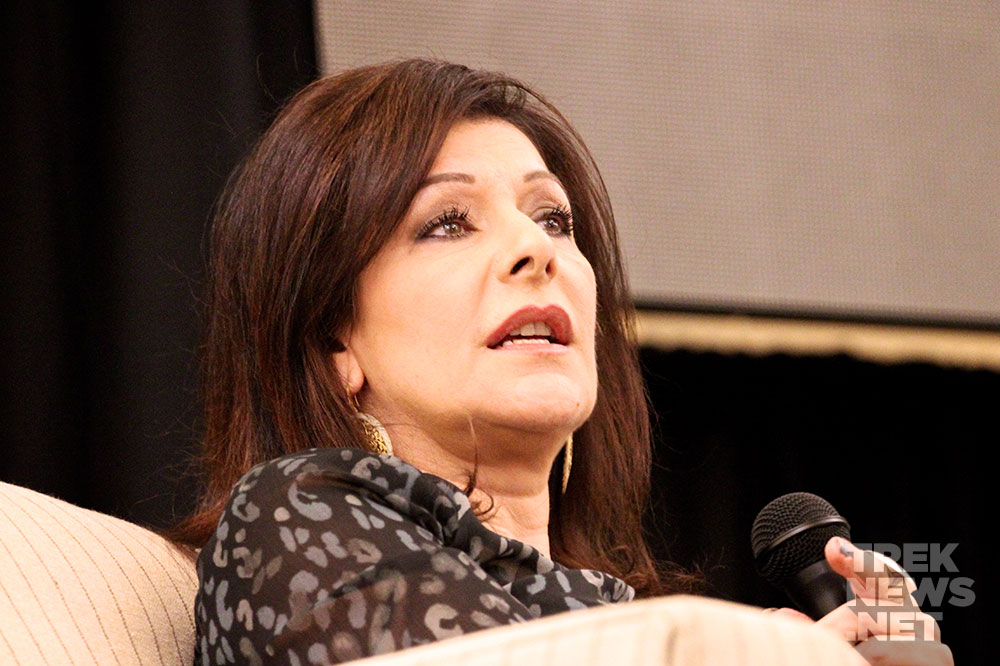 Farrell, who played the symbiont joined Trill character Jadzia Dax, who shared a conscious mind with a long-lived creature, talked about how the role had an impact on her.

I don’t think I’m as sexually active — pretty sure and I’m definitely not a pansexual, but I think Jadzia was, because of the worm and all of the different experiences.

“For me, I think I did become more — well, Dax has certainly served me as a person. I felt like I was maybe not completely Dax by the end of it (Deep Space Nine), but I felt like I really understood trying to be a bigger person and that Dax being as old as, well, it was — ‘cause she was my age, that there were times that I would think my character was gossipy and it really ticked me off because if you’re 350-years-old and you’re still excited about being here, you must love people — love the process that human beings and entities and beings in general go through — the process of maturing and growing, the struggles that we go through. I feel like as a person, I still fall short sometimes. I try really hard to be a bigger person about things and my son has really helped me with that.”

“I think when Ira (Steven Behr) started to write for me, I had more things — I’m more physical than Jadzia was to begin with. I’m more outgoing. I don’t think I’m as sexually active — pretty sure and I’m definitely not a pansexual, but I think Jadzia was, because of the worm and all of the different experiences.”

McFadden talked about playing Dr. Beverly Crusher onboard the Enterprise-D.

“It’s so different from when you’re doing a play for example — or a movie — when you know the arch of your character and you sort of understand the purpose in the relationships of the whole cast and everything.”

“I found it was strange because sometimes when the writers would learn about something you did. Like one time I was just tap dancing to relax at night, when we were filming late, someone told one of the writers and then it got put into one of the episodes, but it wasn’t like I was trying to get that put in. So all of a sudden, I’m the theater coach, I’m the drama coach. Lie what in the world? She doesn’t have enough to do with all of the aliens and the diseases and stuff?”

McFadden was then asked to plug her non-profit, which you can check out at GatesPlays.com. 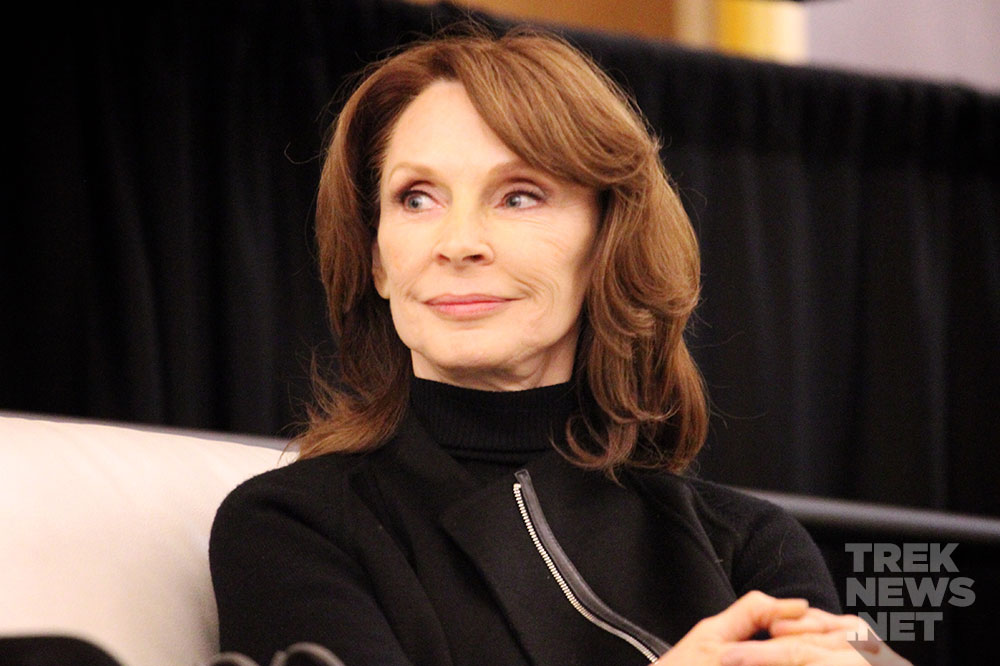 Dorn who’s Worf character is instantly recognizable, even by non-Star Trek fans, talked about the differences in his and Worf’s personalities.

I think I’m probably a little more complex than Worf is.

“When I first started, I thought I put a lot into Worf and then I said ‘Worf put a lot into me.’ and it ended up that neither is true. The character is nothing like me and I’m nothing like him. I mean — I like the character a lot — but we are totally separate. I think I’m probably a little more complex than Worf is. I’ve learned over the years.”

“There was a little campaign for me to voice the computer, but he has basically said that his vision starts with him and nothing came before — you know, kind of thing. That’s his prerogative, but it would have been kind of cool to carry on the tradition.”

The foursome were asked about their favorite episodes.

Sirtis pointed to “The Measure of a Man” where Data is put on trial, as her chosen episode, noting, however, that it was one she wasn’t in very much. She referred to herself as a “huge Law and Order freak,” regarding her love of television dramas. “A Fistful of Datas” was also on her list of personal fvorites.

“I had a bunch of favorites.” Dorn remarked. He pointed to “Soldiers of the Empire” and “Once More Unto the Breach” as two of his most-loved DS9 episodes. Both of which were written by Ronald D. Moore.

“I loved things where it would be the hippocratic oath of the “Crusher” character versus the Prime Directive, where she’d be in conflict. Be it getting involved helping someone who was ill or someone who was wounded by terrorism with the symbiosis where it’s like ‘We know this is a bad thing happening on the planet and you could stop it so easily.” 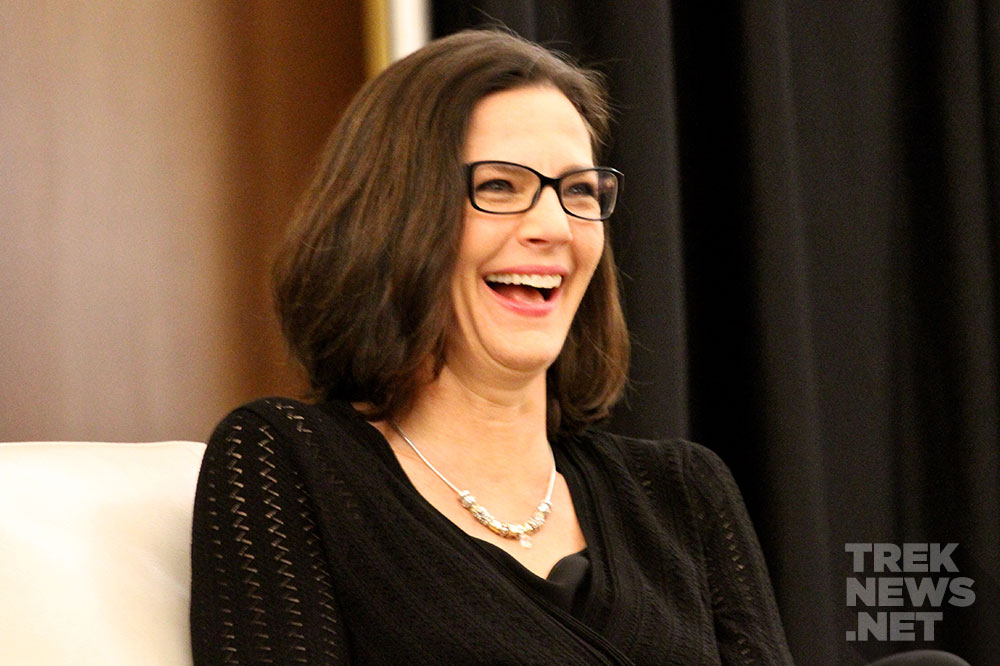 “I loved when Michael came on (Deep Space Nine).” said Farrell. “Every show that we had our story in it, I loved doing. Anything that had to do with stunts, I loved. I loved learning the Bat’Leth. I loved all of that.”

“I particularly liked the sixth season.” she noted. “There was an episode where Michael (Dorn) had to make the decision to leave me and continue the mission or stay and save me. He decided he had to leave and come back. It was just… to watch his heart be torn apart about what thing to do. It was amazing, since it was the sixth season. At that point, it was Christmas time, which means we were filming from July to December, we knew – well, I knew — I wasn’t coming back unless Rick Berman made a big turnaround. Because we couldn’t come to an agreement there.”

In addition to the Star Trek franchise celebrating its 50th anniversary in 2016, Star Trek: The Next Generation will celebrate its 30th anniversary in 2017 — the same year a new Star Trek series is set to premier. In recent years, there’s been speculation that a new television series could be centered around Dorn as “Captain Worf”. Dorn confirmed over the weekend that this would not be the series that’s being developed for CBS All Access. You can read his comments on that situation in our previous article.