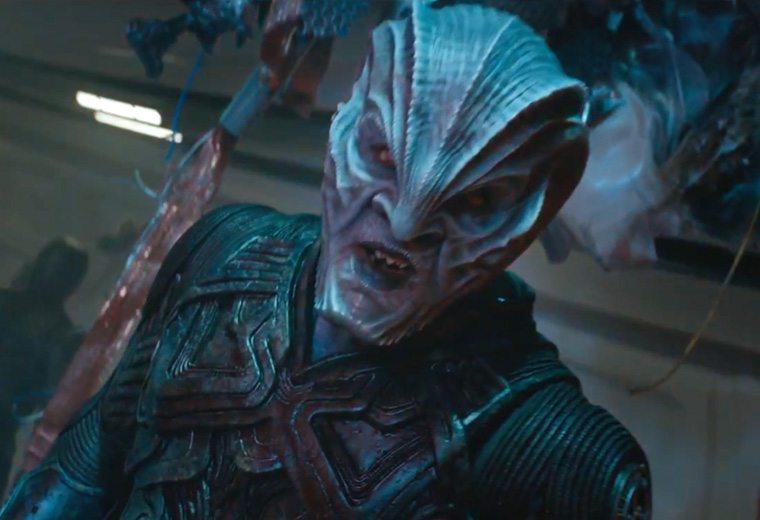 Full Breakdown of the STAR TREK BEYOND Trailer

The first trailer for Star Trek: Beyond was released today after being leaked. Reactions from fans have been all over the board. I’m going to reserve my judgment for later. For now, let’s take a look at the trailer and see what we can figure out.

From what we’re shown, we can extrapolate that the plot is as follows: The Enterprise is destroyed by some kind of alien swarm, and the crew abandons ship in escape pods. Kirk, Spock, Uhura, McCoy and Scotty all land on the same alien world. The rest of the crew shows up there later in the trailer. There is some sort of nefarious operation going on, and it looks like the Enterprise crew is just one group of people who may have been kidnapped and brought there. The trajectory of the movie may be the crew escaping the planet and stopping the evil, whatever that ends up being.

Kirk lands on an alien planet

Kirk watches on as the Enterprise is destroyed.

We don’t yet know who arranged it or why. The villain is likely the alien who looks sort of like a Jem’Hadar and seems to have Idris Elba’s voice. Sofia Boutella’s alien character appears to be an ally of the Enterprise crew. Both Boutella’s and Elba’s characters are yet unnamed on the movie’s IMDB page, so their identities are a mystery for now.

That’s really about all we can guess with certainty about the story. Simon Pegg, who is one of the writers, has said that he prefers not to give the entire movie away in trailers, so we may not learn much more. On the plus side, we finally get a new planet and new aliens. The makeup and effects look great, as do the new alien ships. The Enterprise crew has sharp new uniforms, and the women on the crew finally have rank insignia and sleeves. It doesn’t look like they get pants yet, though, which might make survival on a hostile alien planet more difficult.

Overall, the look of it is very much that of a blockbuster action movie. Stunts, explosions, motorcycle jumps, exciting music. The Beastie Boys song is a callback to the 2009 movie when child Kirk steals the car. The filmmakers seem to be making an effort to distance themselves from the more serious Into Darkness and return to the fun of the first rebooted movie. I’ve seen some fans describe the trailer as The Fast and The Furious in space, referencing director Justin Lin’s previous work.

The fun may not be a problem for some, but I know a lot of fans are hoping for something more substantive and “Star Trek-y” in this film. It’s possible we’ll get some of that. The villain says to Kirk in the trailer “This is where it begins, captain… this is where the frontier pushes back.” While it’s hard to make a nuanced projection from a single line, it could be an indication that the movie will question the morality of Starfleet’s and the Federation’s ideals. The races living in the Final Frontier they are boldly exploring may have their own ideas of what the Federation should or should not be doing.

Uhura is not happy.

Diehard Trek fans should keep in mind that this trailer was not necessarily made to appeal to them. This is being shown before Star Wars: The Force Awakens and is probably meant to draw in a larger audience by showing an exciting and action-driven movie. Most film trailers aren’t meant as fan service (unless you are the aforementioned Star Wars), but to attract new viewers to the franchise. If it wasn’t your cup of tea, don’t panic yet. There is still a likelihood of a good Star Trek movie that can appeal to fans old and new. We have a new TV series along with some high quality fan projects coming up, so if this movie isn’t what you want there are now a variety of other Trek projects to look forward to. If nothing else appeals to you in Star Trek: Beyond, just focus on Karl Urban and his uncanny, delightful channeling of DeForest Kelly as Bones. He’ll remind you of the Star Trek you know and love.

You can check out the full gallery below.

Kirk watches on as the Enterprise is destroyed.

Kirk lands on an alien planet

Uhura is not happy.