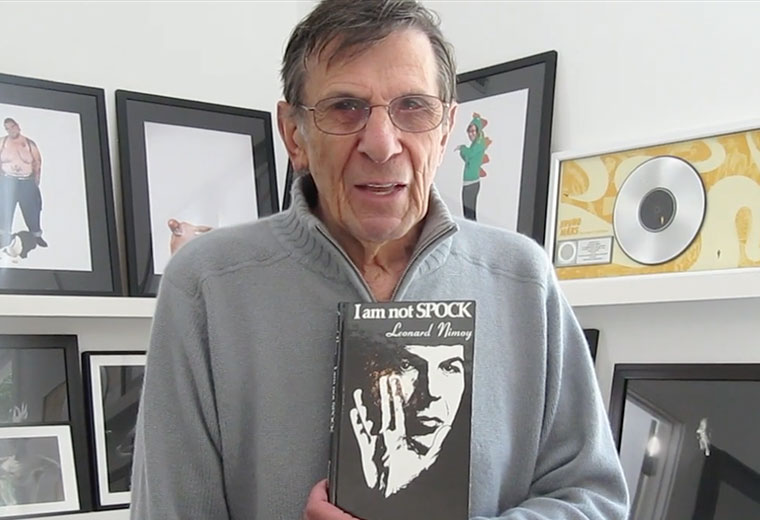 EXCLUSIVE: Leonard Nimoy Talks 'I Am Not Spock'

In an exclusive video released to TrekNews.net by Leonard Nimoy’s daughter Julie and her husband David Knight, the legendary actor talks about his 1975 book I Am Not Spock and the reaction to its title.

“People thought I was trying to distance myself from the Spock character — that was not true.” Nimoy says as he clutches the book.

“I caught a lot of heat because people thought I was rejecting Star Trek.” He goes on to read an excerpt from the book where he discusses the character and his feelings toward him. Check it out in the clip below.

As discussed own our exclusive interview with them last year, Julie Nimoy and David Knight launched an Indiegogo crowfunding campaign to raise money for the documentary film COPD: Highly Illogical – A Special Tribute to Leonard Nimoy. For more information on the project, you can read our interview and visit IndieGoGo page.

LOS ANGELES, CA – January 18, 2016 – Julie Nimoy, the daughter of the late legendary actor Leonard Nimoy, and her husband, David Knight, just launched an Indiegogo crowfunding campaign to raise money for COPD: Highly Illogical – A Special Tribute to Leonard Nimoy. The documentary film will aim to both entertain and educate viewers about chronic obstructive pulmonary disease (COPD), in order to raise awareness about the ailment that took the life of the “Star Trek” star. The Indiegogo campaign link can be found here:

Generations of science fiction fans know my Father as his iconic character Mr. Spock on the starship Enterprise. The documentary is an intimate look at Leonard Nimoy’s life, legacy, and his final years advocating for greater awareness around chronic obstructive pulmonary disease (COPD).

“Leonard felt he had a responsibility to educate people about COPD and create awareness,” explained Knight. “We’re committed to sharing his story with the world through this documentary film, while spreading knowledge about COPD, a common but often undiagnosed disease affecting over 30 million Americans.”

After his diagnosis in 2013, Nimoy went public with his condition and became a COPD activist on social media. Knight said it’s likely his father-in-law had symptoms a few years before his official diagnosis and one of the film’s goals is to reach the millions of people who have the disease, but do not know it.

Produced by Leonard’s daughter, Julie Nimoy, and her husband, David Knight, they are looking to raise $150,000 on Indiegogo, in order to complete the film in 2016.