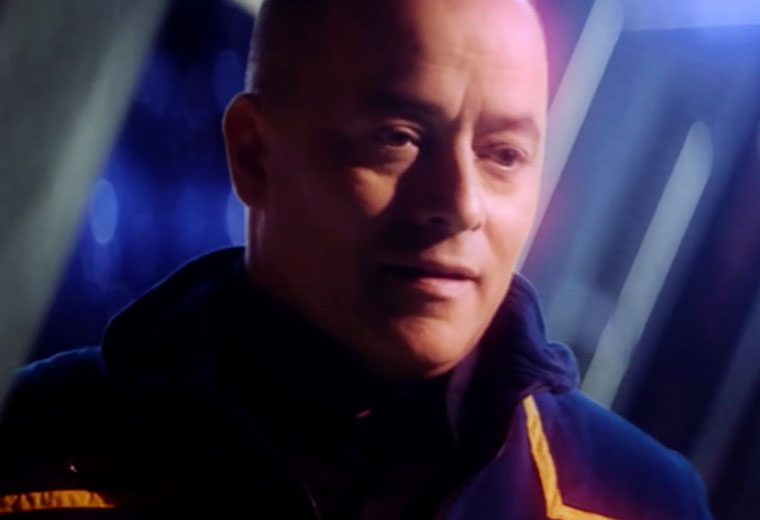 Released in February, the project was successfully backed on Kickstarter in May of 2014 and raised $22,600, more than twice its inital goal.

Horizon is set in the same era as Star Trek: Enterprise, picking up where that series ended. The film centers on the Discovery, an NX class ship like Archer’s Enterprise, and its crew. Captain Harrison Hawke leads a mostly human crew. The one exception is Lieutenant T’mar, a Romulan defector bringing important tactical information to Starfleet. Horizon covers the Romulan war mentioned in Enterprise, and also takes elements of the Temporal Cold War, bringing that to a conclusion.

The film opens with a prelude featuring the last surviving members of a race legendary in the Star Trek galaxy, the Iconians. They have been defeated by another race that created a super weapon called Horizon. The two Iconians take and hide the weapon so it cannot be used again.

Captain Hawke on the bridge

The first scene in the present time begins with Discovery racing back to earth to get T’mar and her secrets to Starfleet Command with several Romulan ships in pursuit. They take heavy damage and suffer casualties. The Enterprise makes a cameo here, swooping in to save them at the last moment. Captain Archer’s ship makes several appearances throughout the movie, which Enterprise fans will love. Discovery limps back to space dock to undergo repairs and debrief.

They learn from T’mar that the Romulans are building a super weapon just two light-years from earth. A fleet of Vulcan and earth ships, including the newly repaired Discovery, head out to find and destroy the weapon, called Horizon. The fleet comes under attack by Romulans, and it’s left to the Discovery to destroy the weapon with their new prototype torpedoes. The torpedoes cause an unexpected spacial rift to form, and Discovery is pulled through.

The crew find themselves at the planet Horizon was brought to by the Iconians. While investigating a structure on the surface they are found by Daekon, a Romulan defector from the future and a combatant in the Temporal Cold War. We learn that he is the mysterious man from the future in the Enterprise series. The crew of Discovery works to defeat him and finally completely destroy the weapon, bringing the Temporal Cold War to a close at long last.

Overall, the plot and writing of this film are absolutely solid. It strikes the right tone and fits nicely into the Star Trek universe. The story is logical for the time period, the characters fit and make sense being where they are, and nothing seems too fantastical for the setting. Good writing and characters can go a long way toward making up for a lower production value.

There are some minor issues with the film, but some of my issues could be personal opinion. I found myself getting a bit annoyed with the soft focus and lens flare, and squinting at the screen a lot. That could either be a stylistic choice or a practical one given that the film was shot almost entirely on green screen. The only other real issue I had was that occasionally the acting could be a bit stiff, but overall the cast is good.

The CGI/effects generally look good, the costumes fit the time period, and the makeup for the aliens is believable. The writing strikes the right emotional tones, and the characters are as fully realized as they can be within the time limitations of the movie.

Fans of Star Trek: Enterprise will love this film and should definitely give it a try. Those who haven’t seen it or don’t remember it well may get a bit lost and not understand all of the references, but the plot will still mostly make sense. It’s a nice continuation of a series that was cancelled too soon, wraps up some of those storylines, and lets us see more of that time in Starfleet and Federation history.

In this article:Fan Films, Review