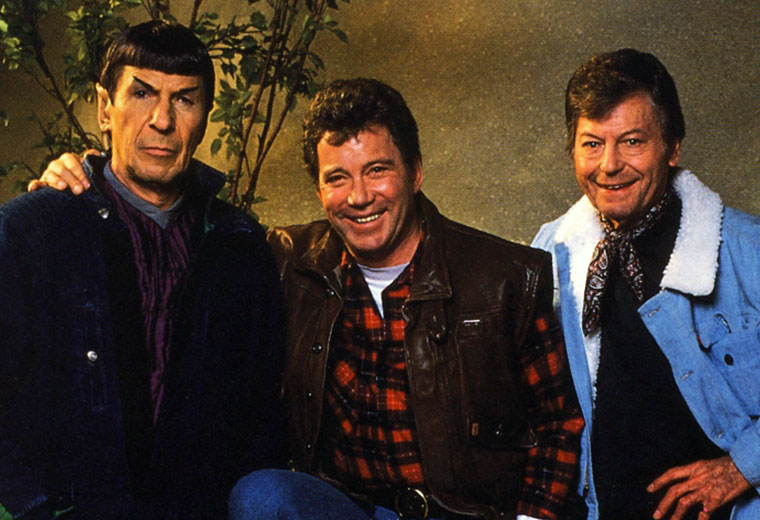 For more than a year, The Secret Society of Film Masons (aka #TSSOFM on Twitter, Instagram, and other social media platforms) has been meeting most Wednesdays at the Alamo Drafthouse in Ashburn, Virginia, to witness cinema’s best, worst, and weirdest. They launched their film club with Alfred Hitchcock’s undeniable classic Vertigo, and have peppered their weeks with equally brilliant movies like The Third Man, The Red Shoes, The Searchers, Goodfellas, and Jackie Brown. However, some of the more lively discussions have been borne out of the Not-Quite-Hollywood endeavors like Maniac Cop 2, The Ice Pirates, and Turkish Star Wars. Quality is not a criterion to exclude a film.

I was there at the first meeting and quickly rearranged my life to ensure that I made the rest. From the start, original Alamo DC programmer Aaron Prescott would ask members for their cinematic wish lists – those movies they missed on their first go ‘round, but have been aching to see projected on that holy silver screen. At every opportunity, I would urge him to accept William Shatner’s infamous Star Trek V: The Final Frontier into the club. These brief conversations often ended in a jovial dismissal. Why would anyone show up to a screening of the often-cited Worst Star Trek Film?

But is it? Certainly Star Trek V has its issues, and was probably doomed from the start thanks to a writers’ strike, Indiana Jones & The Last Crusade stealing ILM away from the production, and producer Harve Bennett lacking any real faith in Shatner’s concept. “What Does God Need With A Starship?” The very idea of the crew penetrating The Great Barrier at the center of the Galaxy only to encounter a God-Thing feels ridiculous, but very much in tone with the original series. The crew of the USS Enterprise bumbles about for most of the running time. Sulu and Chekhov are pretty much relegated to flat-falling comic relief, Scotty is an embarrassment aboard his own ship, and Uhura is offered little more than a fan dance. 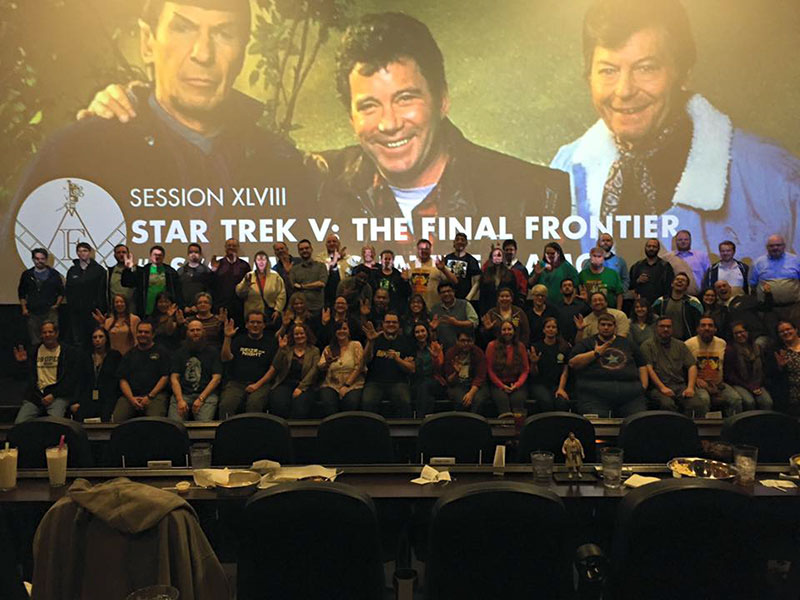 Star Trek V is not Star Trek II. No self-respecting Trekkie/Trekker would argue such a thing. However, the film nails the trinity of Kirk, Spock, and McCoy. Their friendship is the beating heart of the franchise. Sitting around the campfire, roasting marsh melons, and attempting an analysis of Row, Row, Row Your Boat, the triumvirate basks in the knowledge that they are each other’s family. This scene should warm even the most cynical of cynics. And for me, makes Star Trek V: The Final Frontier absolutely essential Star Trek viewing.

After the torch of cinema was past from Aaron Prescott to new programmer Gabriel Ruzin, and after nearly two years of weekly pestering, the Alamo Drafthouse broke down & added Star Trek V to their March #TSSOFM schedule. Victory! Now the real work had to begin…promotion. Taking to Twitter, Instagram, Facebook, Tumblr, Smoke Signals, Carrier Pigeon, and whatever other social media avenues we had at our disposal, the Secret Society bombarded the internet with Star Trek V love! After all, the film had never screened at an Alamo Drafthouse before, and most likely hasn’t screened anywhere else in its 27 years since release.

We reached out to director William Shatner for a pre-taped introduction, and received a polite tweet of “Thanks, but no thanks.” We reached out to George Takei, Walter Koenig, and Nichelle Nichols but we were unable to penetrate their busy internet celebrity lifestyles. The greatest words of encouragement came from Linda Howard, who played The Cat Woman on Nimbus III that lost her life after an exchange of some serious Kirk Fu. Mrs. Howard tweeted her encouragement, and spoke fondly of her four days of shoot-time and six hours of makeup application. Talked to one cast member, Dork achievement unlocked. Away we went!

After a month of anticipation, Star Trek V Day (3/30/16) was finally upon The Secret Society of Film Masons. Some of my greatest joy came from stalking the website’s ticket sales. 10 tickets sold, 20 tickets sold, 30 tickets sold….63 tickets sold! Frankly, as one of the most die-hard Star Trek V defenders, I was astounded by this number. Considering classic movies like Johnny Guitar, The Umbrellas Of Cherbourg, and Sunset Boulevard failed to make such numbers truly indicates the passion for Star Trek, and the real rarity of a Final Frontier screening.

Unfortunately, the usual #TSSOFM MC, Gabriel Ruzin, had business in the Alamo’s motherland of Austin, Texas, and was unable to host this historic event. The terrifyingly privilege of introducing the film to the electric crowd fell on my shoulders. I will forever be grateful to Gabe, and the staff of the Alamo for allowing such a fanboy to take that stage. I remember very little of what I said. My heart was beating out of my chest with nervous excitement. Here was my opportunity to defend a flawed but deeply loved film. Maybe I was a little too protective of the movie, maybe even a little too self-deprecating. I was with the choir. These folks were here already, the converted.

I left the stage. The lights went dark. The pre-credit introduction of Nimbus III, and the laughing Vulcan Sybok projected itself in front of us. Jerry Goldsmith’s iconic score soared, and the title Star Trek V: The Final Frontier beamed before our eyes. There was a lump in my throat, a tightness in my chest, and tears in my eyes. It was a level of cine-freak glee I have never experienced in a theater before. But would the audience feel even an inkling of that emotion?

The Yosemite shore leave won the audience early on. Plenty of chuckles around that campfire, and once you’re won over by Kirk, Spock, and McCoy then that friendship can carry you through some of those wonkier moments. The question at the center of the galaxy of “Why are we here?” lives and dies with that trio, and resonates within all of us. My greatest joy of the screening came when Sybok confronts the triumvirate in the observation room. Sybok backs McCoy into a corner, “Your pain is deepest of all. I can feel it, can’t you?” Over his shoulder, McCoy’s father has his final moments in life. A pointed silence enveloped the theater as we bore witness to real emotion, real heartbreak, real regret, real pain. For eight minutes, there was no better moment in Star Trek. The Final Frontier validated for the Secret Society of Film Masons.

The film rushed to its climax. I passed a note to my wife, “I do not want this to end.” But all good things… Kirk, Spock, McCoy, and Sybok encounter the God-Thing on Sha Ka Ree. “What does God need with a Starship?” Uproarious laughter from the crowd. Captain Klaa fails to get his Terran. Kirk doesn’t hug Spock in front of the Klingons. Kirk, Spock, and McCoy back around the campfire as brothers. Credits rolled. A round of thunderous applause.

After the film, the crowd didn’t want to leave the theater. We gathered around the screen. There were a few “Worst Star Trek” responses, but plenty of “Not bad”s, and even more “That was great”s. I learned that we had guests from Maryland, Pennsylvania, and even North Carolina. One lover of Trek traveled five hours to reach The Alamo, and had to skedaddle to make it home in some reasonable speed. Eventually we had to leave the theater for the next show time, but we lingered in the bar until the next day broke. Sharing our surprise, and glee for a film that’s rarely celebrated amongst the cannon.

Is Star Trek V the worst Star Trek film? Is there such a thing? If something is not wholly good, does that mean it’s wholly bad? Just because a film is not Citizen Kane, does not mean it’s not worth our time and attention. When William Shatner envisioned this story, I imagine that he intended for it to be viewed with the reverence that the #TSSOFM offered. I would only ask that Star Trek V’s myriad of detractors revisit the film with an open heart, and an eye for the value found within.

Is Star Trek V the worst film of the franchise? Tell us your thoughts in the comments section below.