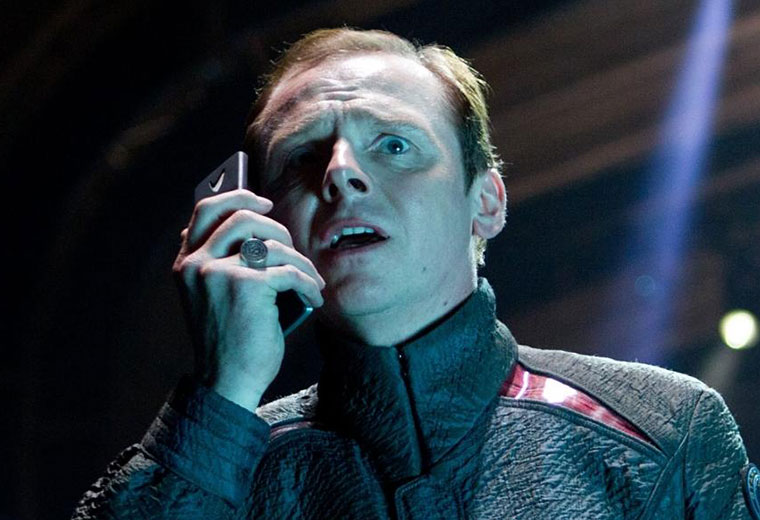 Simon Pegg, who co-wrote and also stars as “Scotty” in this summer’s Star Trek Beyond, recently discussed the filmmaking process and working with director Justin Lin, to bring his vision to life.

Speaking with Collider at CinemaCon, Pegg talked about the process of editing the film, saying:

I’ve seen two cuts of the movie, and we’re just doing a little bit of ADR spotting, where you see if there’s anything that needs to be cleared up. It’s looking great. It’s been such a huge deal, this thing. Getting to write a Star Trek film and the task that lay ahead of us in terms of what we had to do was daunting and stressful at times, but it became enormous fun. Once we got back together with the gang and putting it on film and seeing what Justin was doing, and I can’t wait for people to see it.

A challenge that both 2009’s Star Trek and Star Trek Into Darkness attempted to overcome was appealing to both hardcore Trekkies along with a general movie-going audience. Satisfying both groups can be an incredible challenge, and the two previous films have received an amount of criticism for being too “candy-coated” and action-heavy by the Star Trek fanbase. Pegg discussed the importance of appealing to fans outside the fanbase:

Being given the keys to the Star Trek universe was an extraordinary privilege. It was extremely important to me that we did it justice. I know Star Trek means a lot to a lot of different people. It means an enormous amount to some people. And at the same time, it should be something that everyone can enjoy as well, so you have to look at the means of writing a screenplay as well, which is an invitation to the un-inducted of the Federation Fan Club, and those who have been watching the show for fifty years and knowing it and loving every element of it. And also what’s available to us now and the state of cinema now, and the spectacle to bring people in. It was, “Let’s combine it. Let’s combine the philosophies and tenets of the Star Trek universe with bigger set pieces and exciting stuff. Let’s see Kirk and the guys doing stuff we haven’t seen them do before because we just literally haven’t been able to do that.” But that’s not at the expense of the other stuff. Star Trek is a very thoughtful story. It’s a very intelligent, hopeful projection of our own futures, and that’s something we have to hang on to.

Justin Lin, who is best known for his work on the Fast & Furious franchise and directed Star Trek Beyond is a newcomer to the Star Trek universe. Since it was announced that he’d be taking over the reigns from J.J. Abrams (who moved on to focus his attention Star Wars: The Force Awakens), it’s been speculated that his interpretation of Trek will be nothing but chase scenes and explosions in outer space.

I hate people saying that because it’s Justin Lin it’s just going to be Fast & Furious in space. It’s a kind of reductive, asinine criticism. Justin’s history as a filmmaker started off with a Sundance movie called Better Luck Tomorrow. He’s a smart, sensitive guy. The fact that he was able to energize the Fast & Furious series is a testament to his smarts as a filmmaker. He’s not just the car chase guy.

Pegg went on to discuss working with Lin and what his vision of Star Trek may entail.

Justin had clear ideas about a few of the set pieces in the movie, and we would work with Justin to make sure the story tracked through those moments so if there was a big event, Doug and I would make sure we tracked every character in that event and make it track with Justin’s idea for the visual spectacle, which he is very good at. So once we hit all the dialogue and all the story beats, Justin would work with the pre-viz guys and the VFX guys and whoever else, the stunt teams, to bring it to life.

You can watch the entire interview with Simon Pegg in the embedded video below.

In this article:Justin Lin, Simon Pegg, Star Trek Beyond