In celebration of the upcoming release of STAR TREK BEYOND in July, Paramount Pictures has announced a contest for fans to win entry into the special event at Paramount on Friday, May 20, where the second trailer will be unveiled.

Participants are being asked to explain in a 50-second video “How you Go Beyond as a Star Trek fan” and why you should attend a Star Trek event in Los Angeles.

The contest will consist of five entry periods, during which 50 winners will be chosen and one from each will be provided airfare to Los Angeles and accommodations.

According to Paramount, the videos will be judged on the following criteria: 10% creativity, 20% originality, 30% clarity and 40% relevance (collectively, “Judging Criteria”). Limit one entry per person per Entry Period; individuals may separately enter each Entry Period. 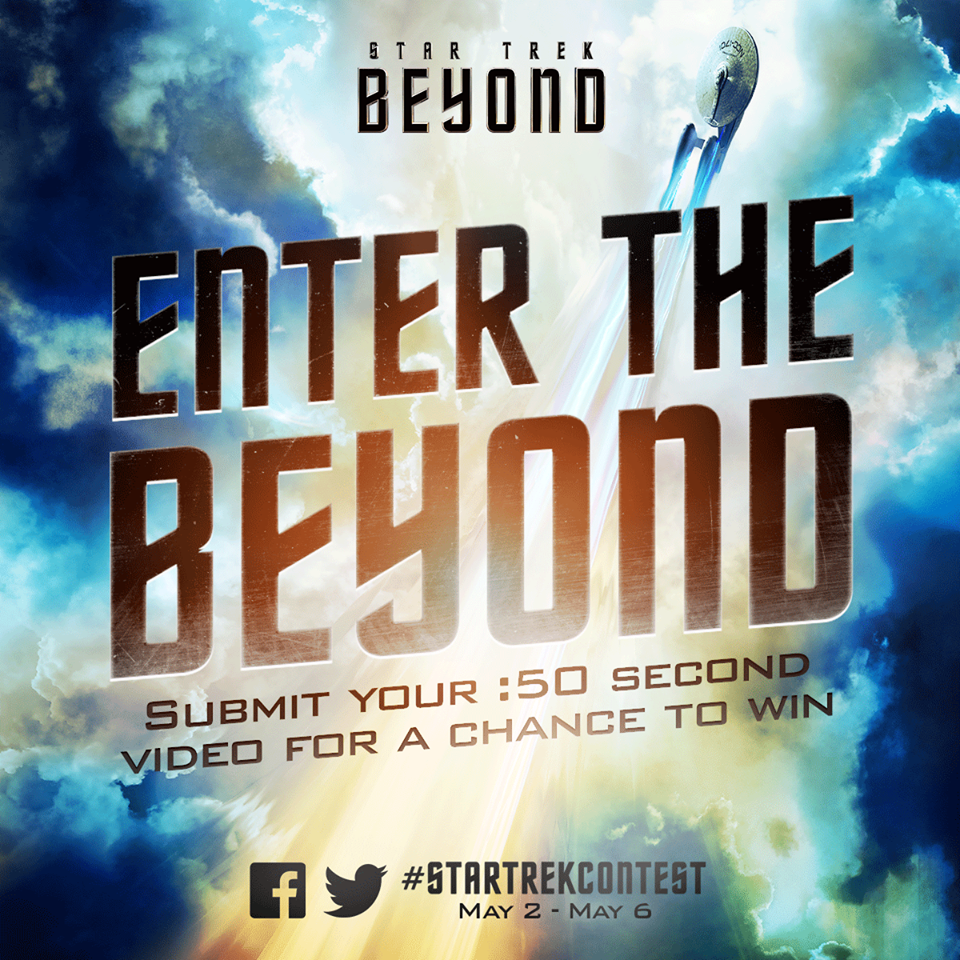 PRIZES: Fifty (50) pairs of tickets to the Fan Event will be awarded for each Entry Period. Tickets will be made available to winners at http://www.eventbrite.com/e/star-trek-beyond-tickets-25068076291. Any information provided by winners to Eventbrite shall be governed by the Eventbrite privacy policy, located at https://www.eventbrite.com/support/articles/en_US/Troubleshooting/eventbrite-privacy- policy?lg=en_US. Winners acknowledge that the tickets to the Fan Event have no monetary value, and in the event that the Fan Event on May 20, 2016 is delayed, postponed or cancelled for any reason, or a prize winner (and his/her guest) do not attend the Fan Event, such portion of the prize shall be forfeited and no substitution will be provided. Except for winners of the “Trip Package” (defined below), no travel expenditures, meals or other incidental expenses of any kind are included with the prize.

• Economy class airfare for two (2) to Los Angeles, California from the commercial airport nearest Winner’s residence;
• Two (2) night’s hotel accommodation – single room/double occupancy in hotel of Sponsor’s choice;
• Two (2) tickets to the Fan Event;
• Taxi reimbursement up to $200 for transportation to and from the airport and hotel;
The total approximate retail value (“ARV”) of each Trip Package is US$3,000 for entrants from United States and Canada, and $4,500 for entrants from Australia and the United Kingdom (accounting for distance of travel, etc).