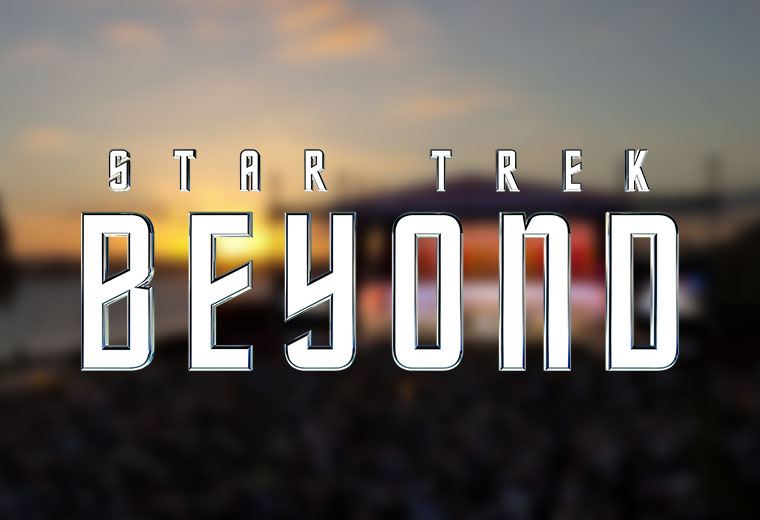 Announced during Friday night’s special fan event at Paramount Studios, STAR TREK BEYOND will debut during this year’s San Diego Comic-Con on July 20th. The film will play in IMAX format along with a live score by the San Diego Symphony Orchestra.

THE FIRST-EVER OUTDOOR IMAX PREMIERE EVENT WILL INCLUDE APPEARANCES BY THE FILM’S CAST AND CREW, AND A LIVE CONCERT PERFORMANCE BY THE

HOLLYWOOD, CA (May 20, 2016) – Paramount Pictures, Skydance, Bad Robot and director Justin Lin today announced that the world premiere of “STAR TREK BEYOND” will play in the immersive IMAX® format at Comic-Con International: San Diego, in partnership with the San Diego Symphony Orchestra and IMAX Corporation, on Wednesday, July 20, at the Embarcadero Marina Park South.

The red carpet event at San Diego Comic-Con, which marks the first-ever open-air IMAX world premiere, will feature special appearances by Lin and the “STAR TREK BEYOND” filmmakers and cast, as well as a live concert performance of Academy Award®-winning composer Michael Giacchino’s film score by the San Diego Symphony Orchestra. Lin made the announcement at the STAR TREK FAN EVENT, where all fans in attendance were invited.

“I am thrilled to celebrate the premiere of the film together with the fans at Comic-Con and excited for everyone there to experience Michael Giacchino’s incredible score played live,” said Lin.

Added David Glanzer, spokesperson for Comic-Con International: “We are both privileged and excited that Paramount Pictures, Skydance and Bad Robot have chosen to honor fans by having the world premiere of the next chapter of Star Trek at Comic-Con this summer.”

“What better way to show appreciation for the constant support of IMAX fans worldwide than by partnering with our friends at Paramount, Skydance, Bad Robot and the San Diego Symphony Orchestra on this ultimate Comic-Con world premiere,” said Greg Foster, Senior Executive Vice President, IMAX Corp. and CEO of IMAX Entertainment.

As a special event for this year’s Comic-Con attendees, fans will have the chance to attend the world premiere of “STAR TREK BEYOND.” Details about ticket distribution will be announced prior to the 2016 convention.

The IMAX® release of “STAR TREK BEYOND” will be digitally re-mastered into the image and sound quality of The IMAX Experience® with proprietary IMAX DMR® (Digital Re-mastering) technology. The crystal-clear images, coupled with IMAX’s customized theatre geometry and powerful digital audio, create a unique environment that will make audiences feel as if they are in the movie.

In this article:Justin Lin, Kelvin Timeline, SDCC, Star Trek Beyond