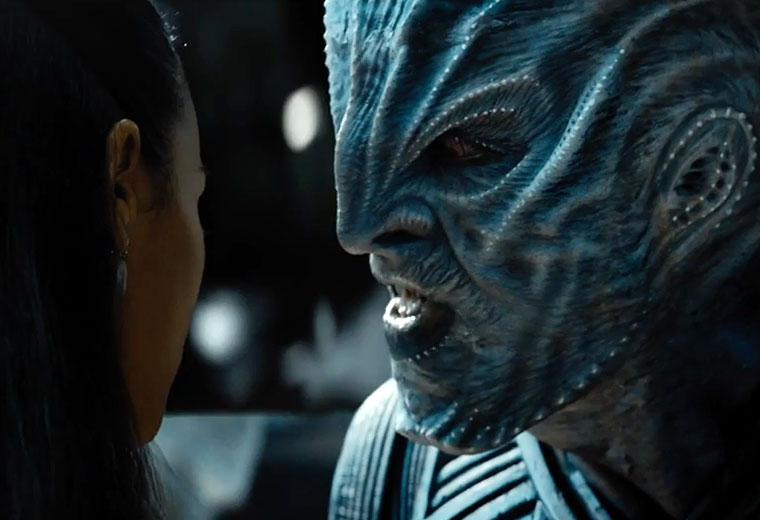 The second trailer for Star Trek Beyond premiered at the fan event in Los Angeles on Friday night, and then dropped online shortly after. Here is a look at what we see and what we could expect.

The trailer begins with the Enterprise approaching a planet, with a voiceover from Kirk talking about his father and their different reasons for joining Starfleet. We see that he’s talking to Doctor McCoy, who muses that Kirk is wondering what it means to be himself instead of trying to live up to his father.

We then transition to various scenes, with a voiceover from Shohreh Agdashloo’s character. She says that it’s common to get lost in the vastness of space, with no one to rely on but yourself, your ship, and your crew. Kirk may be about to lose those things, as the next clip shows the Enterprise being attacked by a swarm. Aliens board the Enterprise, and Kirk gives the order to abandon ship. The crew ejects in escape pods, and we see Sulu’s get attacked by one of the alien vessels/creatures. The Enterprise is destroyed as they watch.

We next see Scotty down on the planet with Sofia Boutella’s alien character, Jaylah. She claims to know why everyone on the planet is there. It cuts to Uhura speaking to the villain, saying that Kirk will come for them and won’t be merciful. “I am counting on it,” the alien replies. There are shots of Federation citizens on either Earth or another Federation planet running from alien attackers.

The following exchange between Spock and Bones happens on what appears to be the planet the Enterprise was destroyed at:

There are more action shots; the crew appears to be fighting for their lives. Perhaps Kirk is trying to mount a rescue to retrieve them. Uhura and Sulu at least appear to be with the villain, along with the larger part of Enterprise’s crew. Spock and Bones are together, while Scotty is with Jaylah, who seems to be an ally.

“Unity is not your strength. It’s a weakness.” We hear Idris Elba’s character say. As we gathered from the first trailer, he has a serious grudge against the Federation. From what we see it may be for good reason.

The final seconds of the trailer show Kirk captaining another ship with some of the crew and ordering them to fire, and a variety of other action and battle shots. The final scene we see is lighthearted, with Jaylah casually sitting in the captain’s chair while Kirk’s crew watches apprehensively. Scotty says, “He likes that seat.”

From this trailer and the previous one, it seems that Star Trek Beyond will be focused on an antagonist who wants to destroy the Federation based on a long-standing grudge. It’s not clear yet what that is, but we get hints of it. He sees unity as a weakness, perhaps implying that the Federation has gotten too big and that is a disadvantage. Maybe the Federation has been an unwelcome interference with the species and planet we see in the trailer.

At the very least this movie is destroying the Enterprise, splitting the crew up, and forcing them to question themselves, their values and those of the Federation, and get pushed to the limits to survive. It looks like we’ll get moral grey areas, and like we’ll be confronted with the possibility that the Federation’s ideals may not be for everyone.