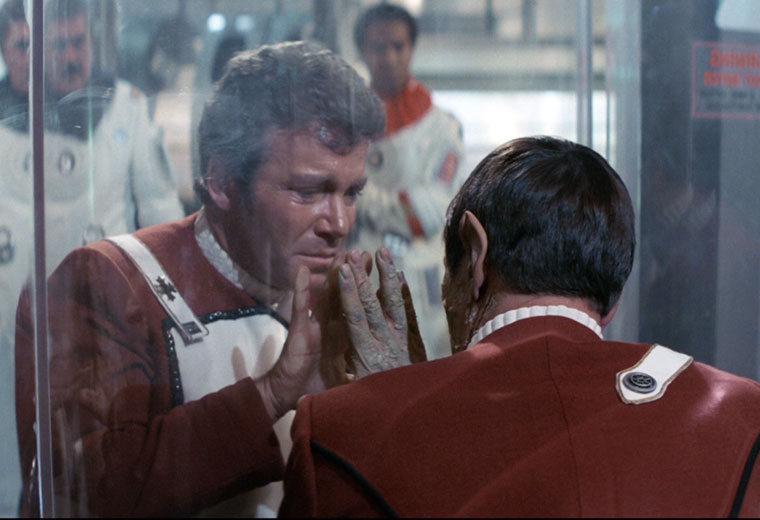 Thirty-four years after the film originally hit theaters, a director’s cut of Star Trek II: The Wrath of Khan has been re-released and is available for the first time in high definition on Blu-ray.

Originally issued on DVD in 2002 and seen during the its original TV broadcast on ABC, the director’s cut of the film runs 116-minutes, as opposed to the 112-minutes of the original theatrical version. 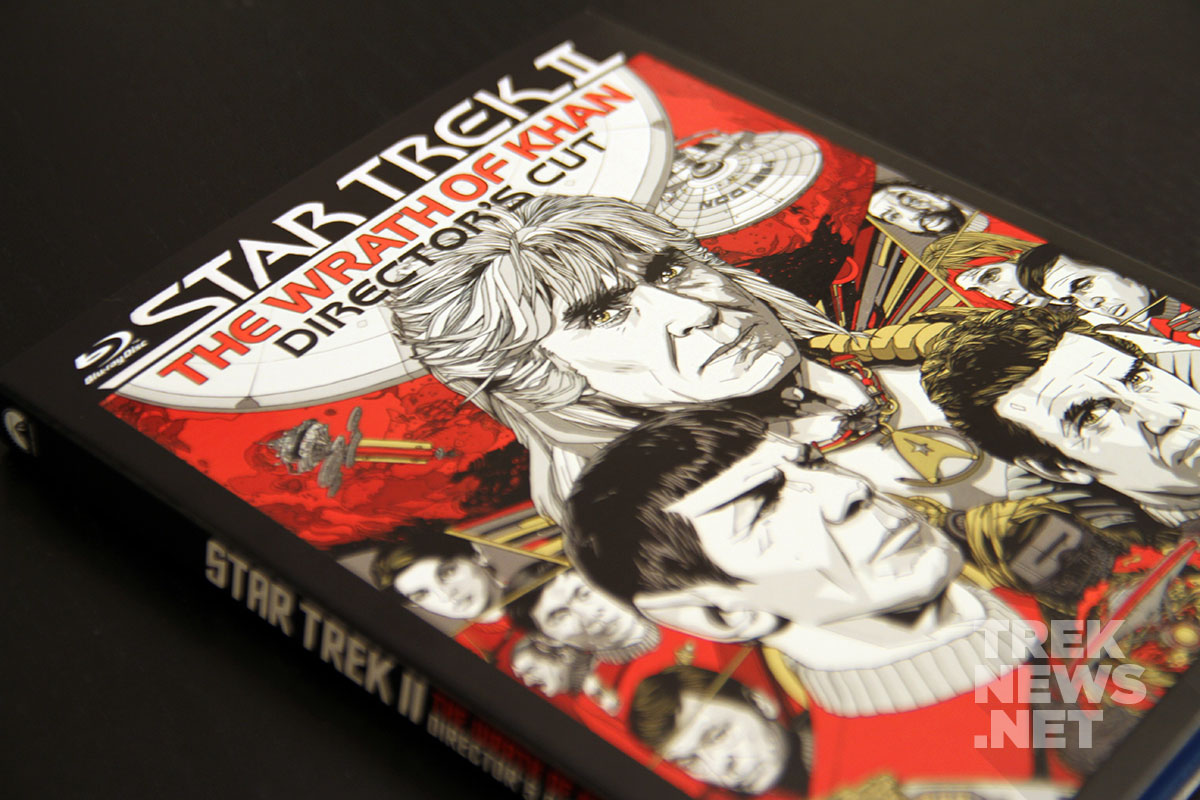 After popping the Blu-ray disc into your player, you’ll be greeted with an all-new menu that features the Enterprise flying past purple and blue nebula along with clusters of stars, as you hear (yes, hear in space) the crash of solar storms. The ambient hum of the Enterprise combined with the visuals in this menu would make for a killer screen saver.

Hitting play will prompt you to choose between the original theatrical version and Nicholas Meyer’s director’s cut.

Following the PG rating screen and the old Paramount title card, you hear the familiar sound of James Horner’s “Main Theme” for what many argue to be the greatest Star Trek film of all-time.

As the music unfolds, I can’t help but smile as I’m immersed in the sights and sounds of nostalgia, familiarity and what I can only describe as a warm embrace from an old friend.

…And starring Ricardo Montalban as KHAN(!)

One thing fans who purchased the original Blu-ray version, as part of the Star Trek: The Original Motion Picture Collection box set, will notice is the removal of the strange blue tint that version of the film had — making for a much more realistic and warmer tone throughout the entire film.

Unless you’re a hardcore fan, you won’t notice many world-changing differences as the director’s cut doesn’t vary too far from the original theatrical version. We’re not talking Bladerunner-level changes here. The story and pacing plays largely the same. Some scenes are slightly extended and flesh out some memorable character moments but let’s be honest even a few extra on-screen moments with these characters should be cherished.

In regards to extras, the only new material you’ll find is a nearly 30-minute documentary featurette titled The Genesis Effect: Engineering The Wrath of Khan. While it may be the only new feature, there’s tons of great information and interviews with director Nicholas Meyer, producer Robert Saalin, Mark Altman, Ralph Winter, Larry Nemecek, John & Bjo Trimble, Adam Nimoy, Susan Sackett and many more. 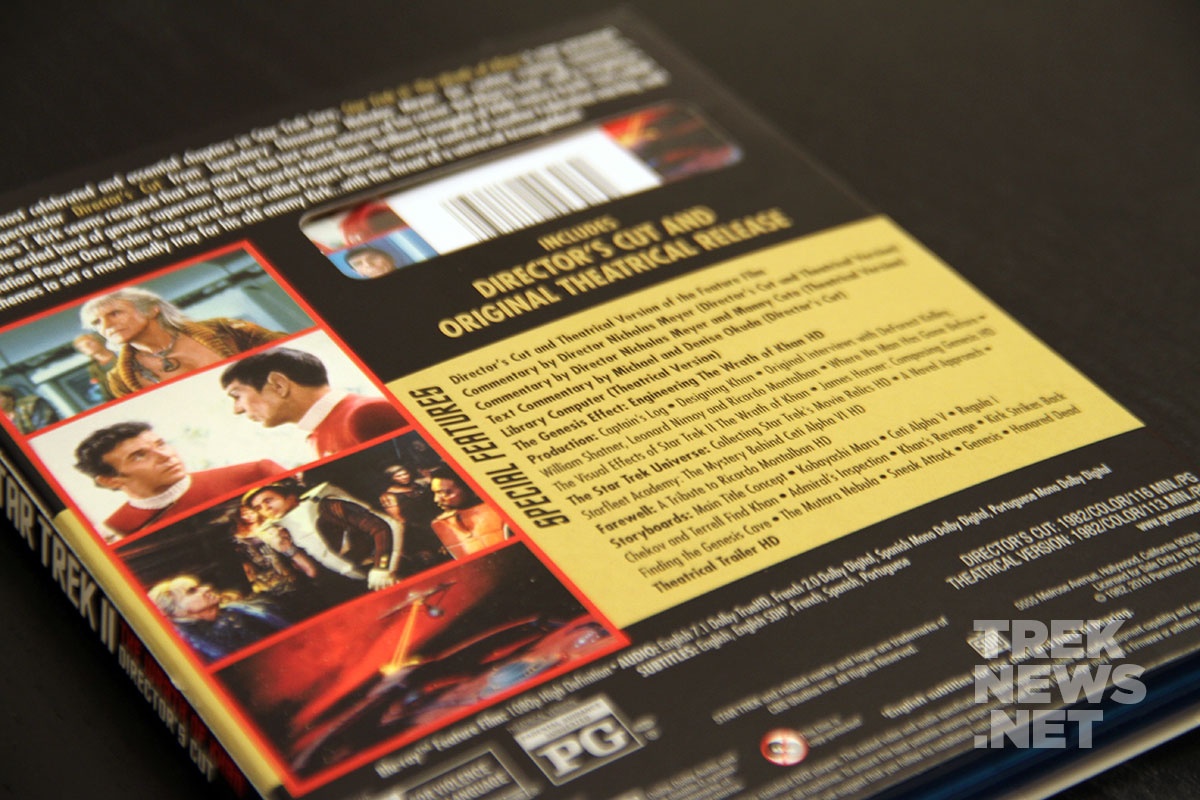 Other previously released extras include audio commentaries by director Nicholas Meyer for both the director’s edition and theatrical version, a commentary by Meyer and Manny Coto on the theatrical version, text commentary by Michael and Denise Okuda on the director’s edition, Library Computer (Theatrical Version), featurettes: Captain’s Log, Designing Khan, along with interviews with DeForest Kelley, William Shatner, Leonard Nimoy and Ricardo Montalban, plus Where No Man Has Gone Before: The Visual Effects of Star Trek II: The Wrath of Khan, James Horner: Composing Genesis, Collecting Star Trek’s Movie Relics, A Novel Approach, Starfleet Academy: The Mystery Behind Ceti Alpha VI, A Tribute to Ricardo Montalban, storyboards and the theatrical trailer.

If you’re reading this and questioning whether you should buy it or not and asking if having another version of the film in your library is necessary — the answer is a resounding yes! The movie itself looks stunning, sounds fantastic in 7.1 Dolby TrueHD, includes both versions of a classic film, plus, it has some pretty kick ass packaging with art by Tyler Stout (originally for a Mondo poster release). The Wrath of Khan has never looked better.

Will this be the last version of The Wrath of Khan you’ll ever buy? Probably not. A film as popular as this and one that’s so highly regarded will almost surely see a 4K Ultra HD release someday — but for now, this is the best you’ll find and hey, it’s pretty damn great.

Star Trek II: The Wrath of Khan – The Director’s Cut on Blu-ray hits stores on Tuesday, June 7 and now available to pre-order on Amazon.