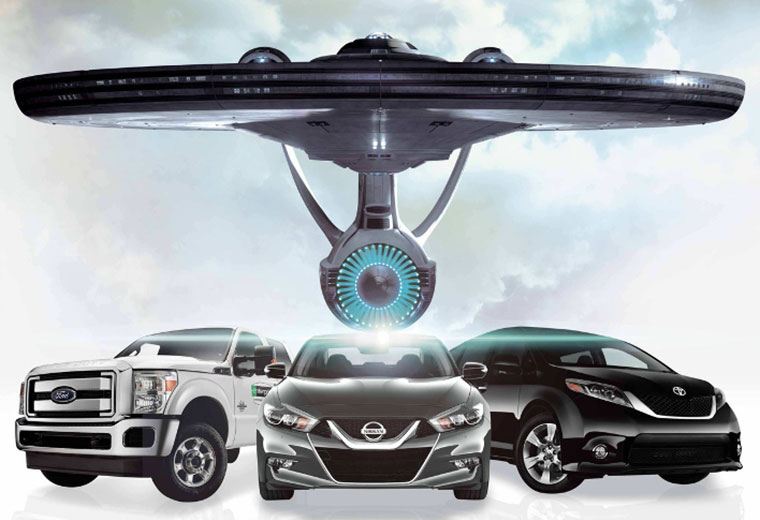 Enterprise Rent-A-Car has announced a new partnership with Paramount to promote the upcoming release of STAR TREK BEYOND.

Fans can visit EnterpriseBeamsYouUp.com to enter for a chance to win a trip for two to the film’s red carpet premiere in San Diego. Other prizes include a private screening of STAR TREK BEYOND for up to 50 people, free movie tickets and prize packs.

In addition to the sweepstakes, there will be Star Trek related signage in Enterprise locations, plus Enterprise airport shuttle buses in New York City and Philadelphia will be wrapped with images of the U.S.S. Enterprise and the phrase: “Until We Can Beam You Up, We’ll Pick You Up”.

“Our customers have long made the connection between Enterprise Rent-A-Car and the famed U.S.S. Enterprise, and now we are officially teaming up,” said Lee Broughton, vice president, Enterprise Rent-A-Car Brand Marketing in a press release. “This is the summer we go way beyond with Star Trek fans all over the country.”

For complete details, check out the press release below.

Until We Can Beam You Up, We’ll Pick You Up. Enterprise Rent-A-Car Partners with Paramount Pictures for Launch of New “STAR TREK BEYOND” Movie

Consumers Can Go to EnterpriseBeamsYouUp.com for Exciting Content and a Chance to Win Tickets to the Film’s Premiere

ST. LOUIS, June 14, 2016 /PRNewswire/ — Enterprise Rent-A-Car today announces a partnership with Paramount Pictures for the July 22 release of the highly anticipated film, “STAR TREK BEYOND.” Through the partnership, Enterprise is offering fans opportunities to experience the movie in unforgettable ways.

Beginning today, fans can visit EnterpriseBeamsYouUp.com to enter for a chance to win a trip for two to the film’s red carpet premiere in San Diego. Other prizes available through the sweepstakes include a private screening of the film for up to 50 people, as well as free movie tickets and prize packs.

Beyond the sweepstakes, Enterprise will also debut a mockumentary-style video that features new vehicles available for rent that will boldly take customers where they’ve never gone before.

Enterprise is extending the “STAR TREK BEYOND” experience to several of its airport and branch locations across the country as well. This month, travelers will begin to notice Enterprise airport shuttle buses in New York City and Philadelphia wrapped with images of the U.S.S. Enterprise and the phrase: “Until We Can Beam You Up, We’ll Pick You Up” displayed on the side. In addition, select branch locations will feature movie-themed posters and other special signage throughout the summer.

“In addition to having a great brand name, Enterprise Rent-A-Car has produced a fun campaign featuring the iconic Star Trek Enterprise ship that will really get fans excited for the movie,” said LeeAnne Stables, President of Worldwide Marketing Partnerships & Licensing for Paramount Pictures.

For more information and the official rules, visit EnterpriseBeamsYouUp.com.

No purchase necessary to enter. The Enterprise Rent-A-Car “Enterprise Beams You Up” Sweepstakes begins at 12:00:00 PM PT on June 13, 2016 and ends at 11:59:59 PM PT on July 28, 2016, which is further divided into 7 Weekly periods as defined in official rules with the Grand and First Prizes being awarded after the 4th Weekly entry period. There is no opportunity to win the Grand or First prize when entering Weekly Entry Periods 5, 6 or 7. Sweepstakes is open to legal residents of the 48 contiguous U.S. and D.C. (excluding AK and HI), who are 21 years of age or older at the time of entry. Void in AK, HI, Puerto Rico and where prohibited by law. The odds of winning a prize depend on the total number of eligible entries received as of the applicable Drawing Date Deadline. ARV: $9,256.00 For complete official rules & how to enter go to www.EnterpriseBeamsYouUp.com Sponsor: Enterprise Holdings, Inc.