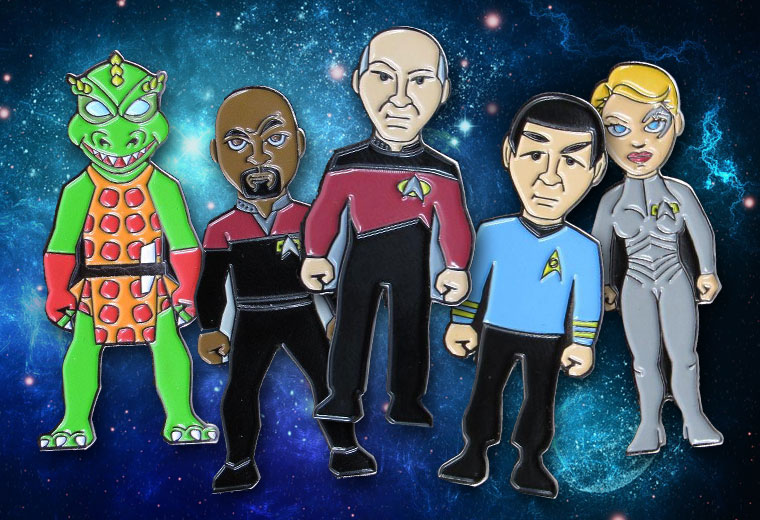 Priced at $8.95 each, the line will soon expand to include several other characters from the Star Trek universe, along with iconic ships seen on television and in film. For more information, you can check out the press release below or visit FanSets.com.

We’ve partnered with FanSets to give away one set of the original sixteen pins to a lucky TrekNews.net reader.

To enter, all you have to do is:

Tell us your favorite scene from an episode of any Star Trek series and what it means to you, in the comments section below. The scene must involve one of the characters listed above.

Please note: You must be a registered Disqus user with a valid email address that receives alerts. You have until Thursday, June 30, 2016 to enter. A random winner will be chosen and contacted on Friday, July 1, 2016. 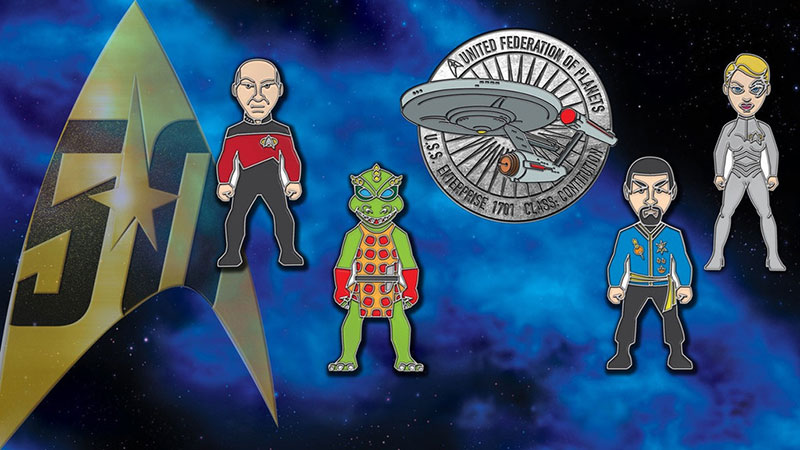 Denver, CO – June 13th, 2016 – The partners of a brand new limited-edition collectibles company called FanSets announced today the launch of their cutting-edge, highly anticipated business with their first license for the iconic Star Trek franchise. FanSets will produce limited edition pins and pin sets, with unique art and technology, designed to appeal to casual and serious collectors of the Star Trek franchise.

The collectible pins, under license by CBS Consumer Products, will retail starting at $8.95. FanSets will produce pins from Star Trek: The Original Series, Star Trek: The Next Generation, Star Trek: Deep Space Nine, Star Trek: Voyager, Star Trek: Enterprise, Star Trek: The Animated Series, feature films one through ten as well as pins celebrating the 50th anniversary and the special events planned during this celebration year. The limited edition collectible pins and pin sets will be available starting June of 2016 on FanSets official website at www.fansets.com where fans can also learn about coming events and products, a special membership club that will be coming later this year, and receive exclusive “members-only” pins and special savings.

FanSets is excited about launching their Augmented Reality (AR) pins later this year – an entirely new (and just massively cool) way to experience fan memorabilia. AR pins will each be associated with a particular 3-D image that can be viewed through a special Smartphone and tablet app. When particular pins are collected together, the app recreates a scene from the corresponding Star Trek TV show, movie or print media in glorious 3-D such as a space battle from the Star Trek universe. The app will feature light, sound effects and theme music with accompanying battle sounds. The music begins to play as a moveable portion of the pin is activated. AR pins have to be seen to be believed.

The partners behind FanSets have a rich history not only with Star Trek but fandom in general. Lew Halboth has 28 years of experience in the video game industry and has worked with some of the biggest names: Sony, Nintendo and Microsoft. His personal collection stretches back into the 60s. John Garrison has served as Director of Operations for two businesses and has managed companies in web design, retail and software development. He is an avid collector of comics and collectibles. Dan Madsen has had a lifelong association with many sci-fi franchises including Star Trek and Star Wars. He founded the Official Star Trek Fan Club in 1979, relaunched the Official Star Wars Fan Club in 1987 and published the Star Trek Communicator magazine and Star Wars Insider magazine.  He has produced hundreds of exclusive collectibles for both of these legendary franchises for the last 30+ years.

“FanSets produces nothing less than the highest quality collectibles worthy of the fans,” said FanSets Partner Dan Madsen. “Each piece must be unique and of exceptional creative design and cutting edge technology at an affordable price. FanSets products will stand out from the crowd, and will be offered in both limited and unlimited sets.”

With limited edition pins, a huge variety of must-have collectibles and incredible new augmented reality technology, FanSets will soon be one of the most recognized names in sci-fi memorabilia. Stay tuned for further license announcements.