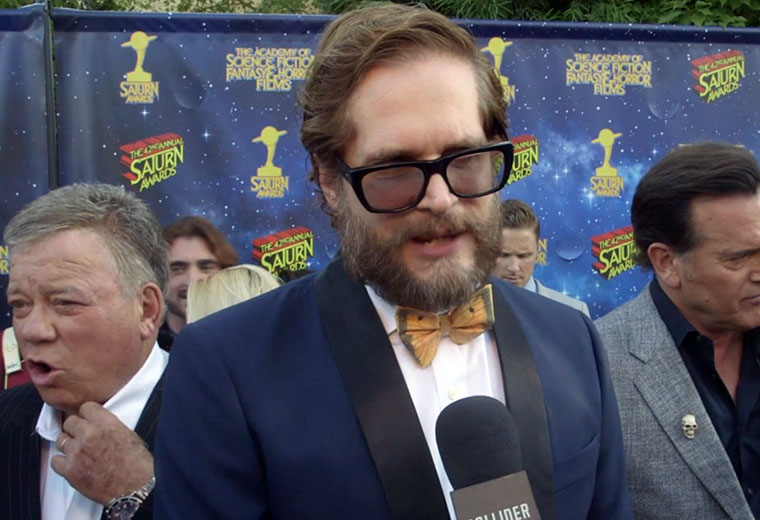 New Star Trek TV series showrunner Bryan Fuller spoke to Collider on the red carpet at the Saturn Awards on Wednesday. Highlights of the interview include: Fuller talking about what it’s like having the keys to Star Trek on TV, the amount of episodes slated for the first season, and where he and the rest of the team are, in terms of writing the series.

As a bonus, look for William Shatner and Bruce Campbell to pop up behind Fuller, during the interview.

Fuller talked about getting the “keys to the Lamborghini” that is th Star Trek franchise, saying:

“It’s interesting you say “Lamborghini” because we’re looking at a lot of race cars as inspiration for our starships. It’s wonderful. It’s surreal. I didn’t want to be a writer. I wanted to be a Star Trek writer, so to be able to craft a new iteration of the show with new characters and a whole new adventure and whole new way of telling stories that you haven’t been able to tell on Star Trek is honorable and it’s a dream come true. It’s hard to articulate that.”

Regarding the writing process and where he and the other writers are with it, Fuller said:

The amount of episodes has been a question many fans have been asking. Previous iterations of Star Trek on TV had in excess of 20 episodes each season, while most modern shows consist of far fewer. When asked whether the new show was going to be 13 or 22 episodes, Fuller firmly stated that it would in fact be thirteen.

He also confirmed that the series would contain a larger over-arching story throughout the entire season.

“We’re very far along. We’re going to be putting sets up in a couple of weeks.” Fuller said when asked about the stages for shooting in Toronto

He went on to talk about the process of casting the new series.

“I’ve met with a few actors and it’s an interesting process. There’s a few people that we like, because we want to carry on what Star Trek does best — which is being progressive.”

Star Trek has pushed boundaries for nearly fifty-years. When asked if the new show would carry on this practice, Fuller said:

“I think the audience — the progressive audience that loves Star Trek will be happy that we’re continuing that tradition.”

When asked about the shooting schedule, Fuller said that they’ll begin in September and shoot through March.