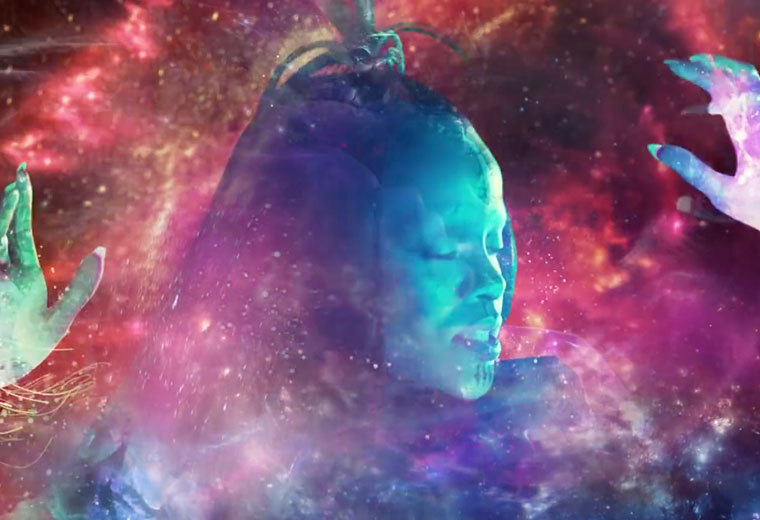 Hey there, fellow Star Trek fans. It seems like some of you are really angry about Rihanna’s “Sledgehammer” video and its tie-in to Star Trek: Beyond. I’ve seen people say some really ugly things about Rihanna in comments. I mean really, truly, ugly and hateful things, for no reason other than she claims to be a Star Trek fan.

Before I get going, I want to clarify a couple things. I’m not here to talk about how we feel about Star Trek doing a cross-promotional marketing campaign with a huge pop star and how that makes us feel about Star Trek and its ideals, nor about the quality of the song or the accompanying music video. I want to comment on the reactions I’ve seen to Rihanna’s video, where she talks about being a fan of the series.

I’m going to sample some of the comments I’ve seen to give you an idea of the vitriol. (Abusive language follows, be warned.)

“some tramp that gets her t*ts out to sell music is Trek fan, its sad day indeed.”

“Shes never seen an episode in her life.”

These are some of the examples. They’re awful. In these three comments alone we have slut-shaming, misogyny and death threats. There is a lot to unpack in these and other things I’ve seen. There are two concepts I want to discuss in order to circle back around to this.

The first is the “Fake Geek Girl/Idiot Nerd Girl” meme (you can find a thorough description and history here, which is the idea that some women or girls pretend to like nerdy or geeky things to make themselves seem more attractive to men, or some variation on that theme.

The second thing I want to bring up is called gatekeeping. This in general means people deciding who is or is not welcome to join their group. In specific it means that some people (usually men) think they have the right to decide if other people (usually women), are good enough or know enough to be a part of the community.

We see both of these concepts in their full glory (or horror?) in the reaction to Rihanna declaring herself a Star Trek fan. The Star Trek community is far from the only place this happens, too. I asked for examples of this happening to other women in fandom before writing this. Here is some of what I got. Responses have been edited for length/clarity.

From one woman, describing joining a Star Trek discussion group and being given a trivia quiz to pass for entrance: “After some posts to that little fan group, it turned out that anyone listed as “female” in their profile self-reported a trivia quiz when joining, but none of the men did. It was my first experience with this kind of gatekeeping, and it definitely changed the way I looked at fan groups.” (S.K.)

Another dealing with dating: “In college a guy handed me a literal test, several pages long, that I was supposed to pass before I could date him. It covered stuff from like Babylon 5, and Douglas Adams etc. I passed it and then told him I was never gonna date him.” (A.V.)

There is this entire article by Corrigan Vaughan about her experience at the Into Darkness premiere.

I’ve had my own share of that sort of situation, too. From a man at the gym looking at my Star Trek t-shirt and asking “Do you actually like Star Trek, or are you just wearing that?” to a myriad of comments about my appearance and how I don’t look like a “Trekkie.”

So, let’s go back to Rihanna. The major problem that people seem to have with her is that she is a young, attractive pop star professing to love Star Trek, and that doesn’t fit what their idea of a “real” fan should look like. As if she were pretending to be a fan to sell albums or get attention. (Rihanna does not need help selling albums, for the record.) It feels like some people have a problem with a woman who uses sex appeal in her art liking the same thing they do. That she isn’t trustworthy, that there’s some ulterior motive to her profession of fandom.

If Rihanna says she likes Star Trek and that it has always been a part of her life, I’m going to believe her. I’m not going to assume that just because she’s a young woman and a pop star she couldn’t possibly REALLY know or like this thing. It’s not my job, or anyone else’s to determine who is or who is not a real fan. They may not have the same depth and breadth of knowledge some of us do, but we should welcome them with open arms nonetheless.

A lot of fan communities, and not just Star Trek, still have problems with marginalizing their female members, particularly the younger ones. There’s no point in doing this. They end up turning people away from taking part in something they love and dedicate hours of their lives and countless dollars to. It’s getting better little by little, and more discussions about it are happening, but it’s clearly still a major issue.

I promise, we are not here for attention. We’re here because we love Star Trek (or Doctor Who, or Babylon 5, or video games, or science) and because we want to be a part of a community of people who love the same things.

Let Rihanna love Star Trek without judging her or calling her a fake. Let’s take “infinite diversity in infinite combinations” to heart. If nothing else, hey, we now have a totally awesome, high profile new member of our fan community. At the end of the day, it doesn’t matter if you’ve seen every episode or only one, or if you’ve been a fan for years or just discovered it. If you enjoyed Star Trek and it touched you in some way, you’re a fan just as much as anyone else.