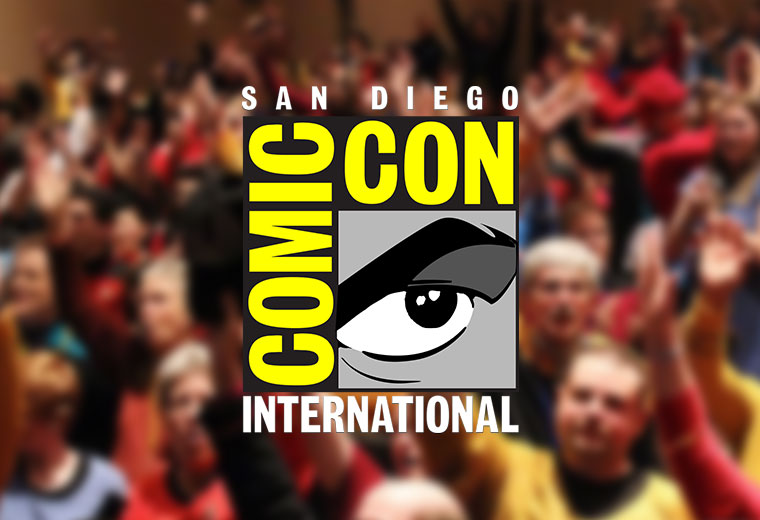 To mark the 50th anniversary of the franchise, Star Trek will have a major presence at this year’s San Diego Comic-Con (July 21–24).

With multiple panels scheduled for the annual mega-event, the crown jewel looks to be a Bryan Fuller-moderated panel Star Trek: Celebrating 50 Years with William Shatner, Scott Bakula, Michael Dorn, Jeri Ryan and Brent Spiner in Hall H on Saturday (July 23). The panel will include a special look back at the last five decades of the legendary franchise and of the future with the new Star Trek series that launches in January on CBS All Access.

As we’ve previously reported, “Star Trek: 50 Artists. 50 Years” art show, takes place at the Michael J. Wolf Gallery in San Diego, with Star Trek-inspired 2D and 3D works by 50 artists from 10 countries around the globe — one of which, was created by Leonard Nimoy. The free exhibit will be on display from 11 AM-8 PM July 21-23 and 10 AM-5 PM on July 24.

Check out a full list of Star Trek-related events, panels, vendor booths and exclusives at SDCC below. 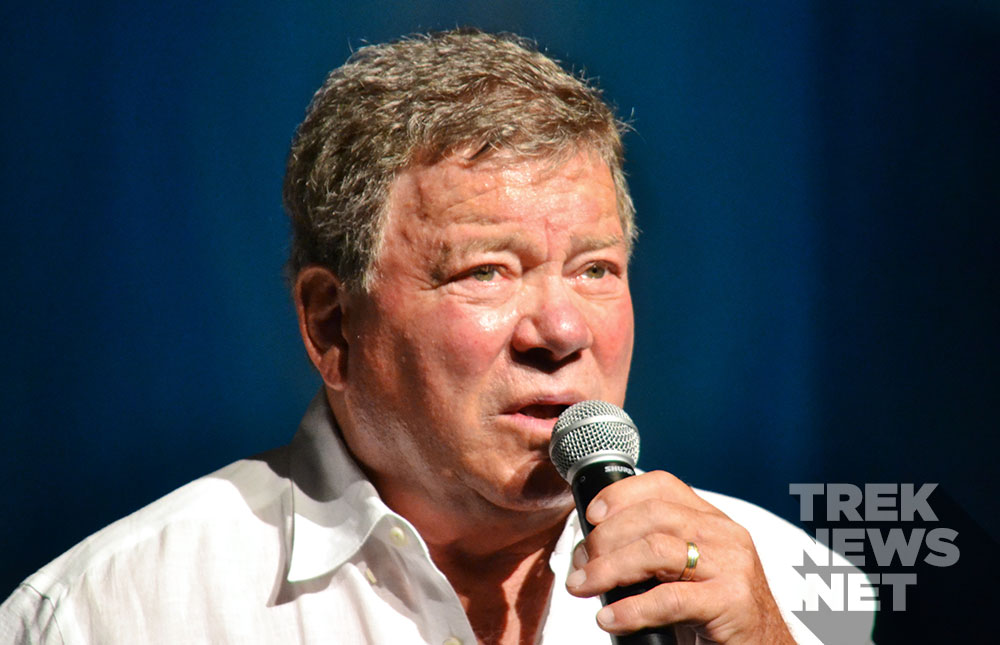 In the centerpiece of the weekend, Star Trek: Celebrating 50 Years will take over Hall H on Saturday, July 23 (2p.m. – 3p.m.), when the legendary William Shatner (Star Trek) and Star Trek alumni Scott Bakula (Star Trek: Enterprise), Michael Dorn (Star Trek: The Next Generation, Star Trek: Deep Space Nine), Jeri Ryan (Star Trek: Voyager) and Brent Spiner (Star Trek: The Next Generation) take the stage to reflect on 50 years of Star Trek and its indelible mark on our world, as well as what’s to come as the franchise gets ready to boldly return to the small screen. The conversation will be moderated by Bryan Fuller, executive producer of the new Star Trek television series coming to CBS All Access, following its network premiere in January 2017.

Created to commemorate Star Trek’s 50th anniversary, 50 Artists. 50 Years. features Star Trek-inspired works by 50 artists from around the globe, including the last piece created by Leonard Nimoy, a renowned photographer in his own right. The exhibit will include original 2D and 3D pieces by the artists, who selected a variety of mediums — illustrations, photographs, sculptures, paintings, graphics and more — to express their love of the franchise and the inspiration gained from it.

Fans are invited to tour the art exhibit Thursday, July 21 through Saturday, July 23 from 11a.m. – 8p.m. and Sunday, July 24 from 10a.m. – 5p.m. The exhibit is free and does not require tickets. Special signings by participating artists will occur throughout the weekend. For a full schedule, please visit StarTrek.com

MAC and Star Trek have joined forces to deliver fans exclusive early access to the cosmic new makeup collaboration inspired by the women of Star Trek. Fans can jump aboard the transporter, located in Children’s Park across from the Convention Center, to explore strange new worlds for photo ops and to shop the 25-piece collection, ranging from lipstick to nail polish to eye shadows, six weeks early in a futuristic and unique immersive experience.

In addition to Saturday’s Hall H panel, fans will find much more Star Trek programming and exclusive merchandise in the convention center including:

From the cutting-edge labs of the Smithsonian Institution to the front-lines of the digital economy, the promises made in Star Trek are coming true. This panel gives a glimpse at real Trek technology: the tricorder that may change medicine; laser weapon technology; and an actual tractor beam. And fans will get a preview of the original Starship Enterprise, fully restored after 50 years and the centerpiece of the National Air & Space Museum. This panel will be supplemented by exclusive preview clips from Smithsonian Channel’s two-hour special “Building Star Trek,” which will air later this year. Dr. Margaret Weitekamp, Curator at the Smithsonian’s National Air and Space Museum, moderates a discussion with Dr. Sonny Kohli, Team Leader of Cloud DX, a finalist for the Qualcomm Tricorder XPRIZE®; David Grier, Professor of Physics and Director of the Center for Soft Matter Research at New York University, who is developing a real-life Tractor Beam; Dr. Rob Afzal, Lockheed Martin Senior Fellow Laser Sensor and Systems Harnessing the Power of Lasers; and Elizabeth Trojian, Executive Producer of Smithsonian Channel’s “Building Star Trek.”

On September 8, 1966, a new television series premiered with a basic mission: to explore strange new worlds, to seek out new life and civilizations, to boldly go where no one has gone before. Little did anyone expect Star Trek would become one of the most adored and influential entertainment icons of the last half century. Star Trek documentarian Roger Lay, Jr.; Rod Roddenberry, CEO of Roddenberry Entertainment and son of Star Trek creator Gene Roddenberry; CBS’s Phil Bishop; and Star Trek alumni Mike and Denise Okuda will reveal never-before-seen clips and photos from some of Star Trek’s most beloved episodes.

Star Trek has influenced many of us to fall in love with the infinite possibilities of space exploration. The various television series and films have also made an indelible impact to NASA. NASA scientists, engineers and astronauts often cite Star Trek as inspiring them to pursue careers in their fields. (Nichelle Nichols even helped NASA recruit astronauts in the 1980s.) How does NASA’s vision of the future mimic the world of Star Trek and where does it differ? What technologies in the Star Trek world have paved the way for real technologies being developed by NASA? Robert Picardo, who portrayed The Doctor on Star Trek: Voyager, will moderate a panel which includes Astronaut Kjell Lindgren, NASA Johnson Space Center; Amber Staughn, Astrophysicist, NASA Goddard Space Flight Center; Bobak Ferdowsi, Flight Systems Engineer, NASA Jet Propulsion Laboratory; and Jay Falker, Early Stage Portfolio Executive, Space Technology Mission Directorate, NASA Headquarters.

Star Trek concept designer Rick Sternbach and Visual Effects Producer Dan Curry discuss exactly what it takes to take a Starship from the page to the screen and how the process has changed since Star Trek: The Next Generation debuted in 1987 with the introduction of CG. The panel will be moderated by Eaglemoss’s Ben Robinson and everyone who attends will receive a free model Starship from Eaglemoss’s collection.

A celebration of all the 4-color Star Trek worlds, featuring a look at all past iterations and a chat with many who’ve chronicled the Enterprise crews’ comic-book adventures, including Len Wein, Scott Tipton, Mike Johnson, John Van Citters and JK Woodward. Moderated by Star Trek editor/supreme commander Sarah Gaydos.

Star Trek fans will have an assortment of one-of-a-kind products to choose from, including the debut of a Mega Blok mini-Enterprise in red, yellow and blue. The mini-Enterprises will be available at Star Trek licensee booths throughout the show. Locations and times of the giveaways will be revealed via Twitter (@StarTrek).

CBS will distribute free limited edition collector’s lapel pins featuring the new logo for the CBS All Access Star Trek series coming in 2017. The pins will be available while supplies last at the MAC activation located in Children’s Park across from the Convention Center, at the 50 Artists. 50 Years. art exhibit at the Michael J. Wolf Fine Arts gallery and at the QMX booth (Booth #4145).

ANOVOS will feature its latest Star Trek Beyond items, including the Tunic, Dress, Survival Jacket and the Hand Phaser prototypes on display. Additional Star Trek items will also be available, with an SDCC special that gives fans 15% off purchases at the booth (includes take-home items available at the booth and items available on the ANOVOS website).

A huge selection from the Starships Collection, including a new Mirror Universe variant of the NX-01, will be on display at their booth. They will be hosting sweepstakes throughout the convention, with a drawing for Star Trek product on Day 1 (Thursday). A grand prize drawing for The Official Starships Collection will be held after Comic-Con ends. Attendees can enter the various sweepstakes by visiting booth #1504 and scanning their badges.

Her Universe will offer an exclusive Star Trek t-shirt. The 3rd annual Her Universe Fashion Show and design competition with Hot Topic is back at San Diego Comic-Con and will take place July 21 from 6p.m. – 8.pm.

Icon Heroes will offer limited edition Mirror Kirk and Mirror Spock statue paperweights, limited to 1,000 pieces each, alongside their Star Trek: The Original Series Kirk and Spock paperweights that are on display.

IDW will feature the trade paperback of “Manifest Destiny,” plus selections from their entire Star Trek line.

The Official Star Trek Shop will offer an array of the latest Star Trek products to fans.

Rubies will feature an array of Star Trek costumes and accessories, including Deluxe Captain Kirk, Spock, Scotty and Uhura costumes, a phaser weapon, and Spock ears.

Simon & Schuster will have the latest releases available for purchases: TOS: Legacies: Captain to Captain, TOS Legacies: Best Defense, and TOS: Elusive Salvation, along with the hilarious TNG: Warped!: An Engaging Guide to the Never-Aired 8th Season. Thrilling novels, such as TOS: The Latter Fire, TNG: Armageddon’s Arrow, and TOS: Child of Two Worlds, will be available as promotional giveaways throughout the convention.

An exclusive Star Trek Timmy Button will be given out every day with a password that fans can find by following @ThinkGeek. There will be a total of five different buttons, one style a day. The Wand Company will be demoing the new Star Trek: The Original Series Communicator Bluetooth Handset ($150) and will have the Star Trek: Phaser Remote Replica Universal Remote Control available for purchase ($150). RockLove’s Star Trek Sterling Starfleet Trillion necklace will also be available at the ThinkGeek both. The necklace celebrates 50 years of the iconic Starfleet insignia silhouette and features a 7mm trillion-cut cubic zirconia gemstone. Mezco’s 1/12 scale, detailed sculpt of Commander Spock in an exclusive redress from the Mirror Universe is available for $80.

Titan Publishing will have 100 copies of a limited-edition Comic-Con exclusive of Star Trek: 50 Artists. 50 Years. available for $60, as well as the regular edition available for $40. They will also have The Autobiography of James T. Kirk in paperback. Titan Merchandise will debut their 4.5” TITANS vinyl Enterprise and a Comic-Con exclusive twin pack of their 3” TITANS Star Trek vinyls – the Kirk & Spock Amok Time Edition – from their upcoming Star Trek TITANS vinyl collection.

USAopoly will have RISK®: Star Trek 50th Anniversary Edition, TRIVIAL PURSUIT®: Star Trek 50th Anniversary Edition and Star Trek Panic® available for purchase in their booth. FunEdibles, the new line of tasty collectible vinyl figures, will be revealed — including its Star Trek characters Captain Cup Kirk, Spock Tart, and Gorn Bread Muffin. Fans will have the chance to take a photo with a life size Spock Tart FunEdible figure by following the #funedibles on social media to find out where he will be.

In this article:SDCC, Star Trek 50