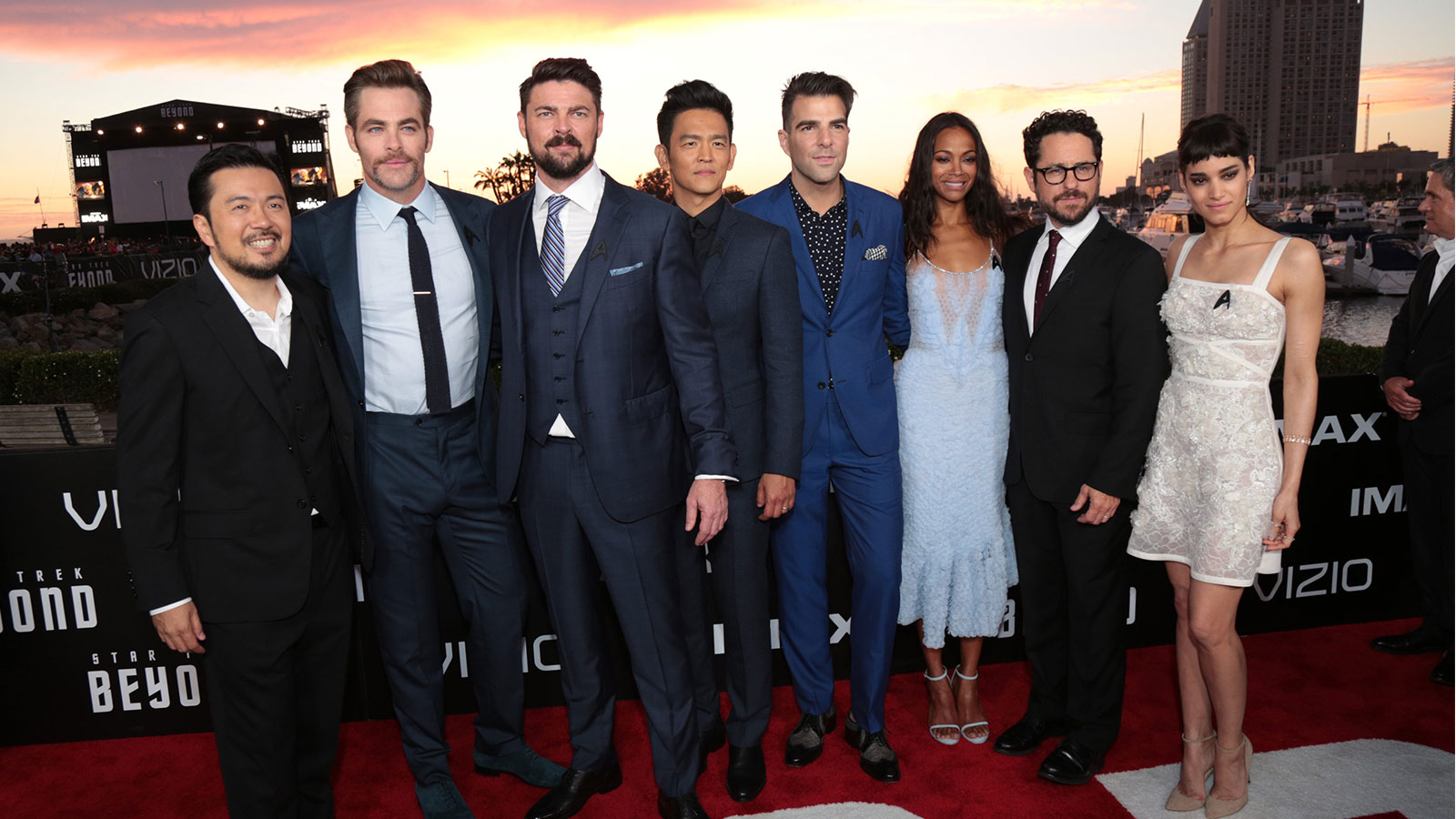 The three thousand fans that attended the Comic-Con International Star Trek Beyond Premiere in San Diego, California traveled from every corner of the globe: Orange County, New York City, Richmond, France, and more. The further the distance the more exuberant their passion; a healthy competition of “Who loves Star Trek more?” surged through the deck chairs. Flat and hard in a way that only cheap plastic could be, the endless ocean of chairs planted across the Embarcadero Marina Park Amphitheater certainly kept the crowd rooted in their passion. Whatever feelings the film itself would eventually stir, everyone knew that simply being there would be a highlight in their fandom.

As others filtered through security, those lucky enough to find their seats early were treated with the original series episode, “The Corbomite Maneuver.” It’s an episode just iconic enough to invite every tier of fans to engage in an unscheduled quote-a-long. “More Tranya?” Dressed and shimmering in gold, Nichelle Nichols took the stage shortly after the episode’s end. Asked by moderator Scott Mantz about the first time she stepped onto the Star Trek set, Nichelle responded, “I knew I belonged.” And that’s just it, right? The first time we watched Star Trek, we knew we belonged. We belonged to Gene Roddenberry’s vision of a positive future where an African, Russian, Japanese, and American crew could pilot a starship into a Final Frontier where knowledge, love, and the occasional Klingon skirmish awaited us. Nichelle Nichols continued, “We can make the world a better place.”

The real challenge for a punctual start came from the serpentine red carpet that stretched down the pier. Each Enterprise crewmember slowly navigated their way through a classic onslaught of photographers and fashion critics. Skipping past trivialities, co-writer Doug Jung said his initial goal with Star Trek Beyond was to “have something that felt true to Star Trek… big sweeping, epic adventure.” His partner in the process, Simon Pegg said that he “started trying to write a Star Trek film” something that could “tie year 50 to year 1.”

Honoring the original contributions of Gene Roddenberry and the myriad of writers & performers who have added to the mythology of Star Trek over the years was an explicit goal for this next generation. On Leonard Nimoy, Zachary Quinto said that it was essential to “find a way to honor integrating him into the narrative… I feel a sense of responsibility.” When faced with the reverence of the crowd, Quinto continued, “It’s so peaceful here… I expected it to be mayhem.”

That peace might have come from a void in the red carpet, a palpable absence. Zoe Saldana was the first to address the passing of Anton Yelchin. Each cast member wore a black Delta shield on their person. Saldana exposed the pin for the cameras, she said for her it was “a reminder that life is so fragile.” JJ Abrams in talking with Master of Ceremonies Conan O’Brien spoke that there was “something wrong tonight, something missing…and someone missing.” This premier was not simply an unveiling of the next Hollywood Summer Event, for those involved it was a family affair. Anton’s parents Irena & Viktor were in attendance, and when a moment of silence was requested the entire Marina Park stopped in time. JJ thanked the crowd, the San Diego Symphony went into Michael Giacchino’s overture, and the Enterprise crew embraced in a circle. Dry eyes? Not a one.

Justin Lin was the last to take the stage. He stared out into this massive crowd of fans desperate to share their love. He exclaimed to us that Star Trek was “a part of me and a part of my family.” He thanked his mom & his dad for letting him stay up late, and he stepped off the stage with a laugh trapped in a smile.

As the first outdoor IMAX experience, I wondered what traditional cinema rules the audience would follow. Talking? Texting? Seat Kicking? However, the San Diego Symphony orchestra owned us. From the title cards we all belonged to Star Trek, we were transported aboard and didn’t beam back down till the credits finished.

I’m not sure I will ever be able to fully critique Star Trek Beyond. I know that I loved it. I know that it is filled with more of The Original Series’ spirit than perhaps even Shatner & Company’s cinematic outings. Like all the previous films (except maybe 79’s The Motion Picture), Star Trek Beyond is an action movie. But it remembers to stop & take time with the characters we love. It knows that it’s more important that Kirk survives his birthday than whether or not the Yorktown is torn to shreds. It knows to have fun. “More Tanya?”

You can check out a full gallery of photos from last night’s premiere of Star Trek Beyond here.

In this article:Kelvin Timeline, SDCC, Star Trek Beyond