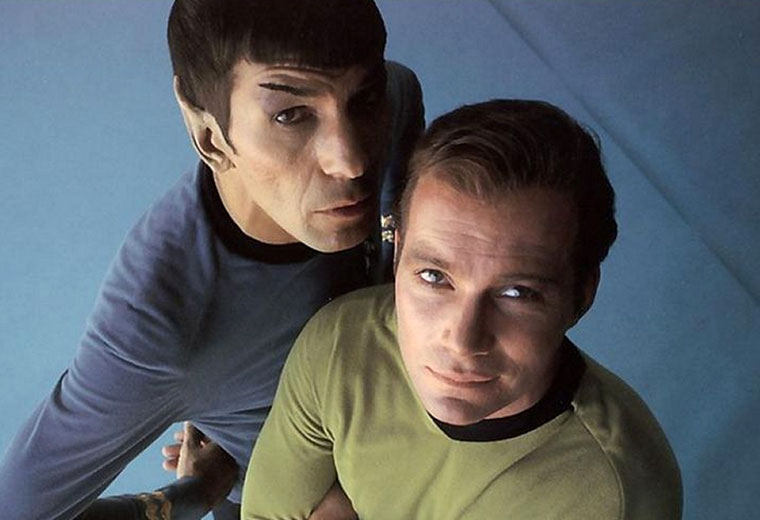 San Diego Comic Con International and Star Trek Las Vegas may be over, but 2016 is still gearing up to be one of the greatest years yet for fans of Gene Roddenberry’s legacy. As we get ever closer to the official 50th Anniversary Date (September 8th when McCoy met Salt Vampire in Trek’s first official episode “The Man Trap”), news outlets from around the world jam our newsfeed with Trek catnip. The newsstands are busting with Time Magazine, Life Magazine, Newsweek, and TV Guide cover spreads. Even the National Smithsonian is getting in on the action with not one, but two displays in the Air & Space Museums. You regularly read this site, so you’re already fully aware that 2016 is going to be one for the books… a book hopefully curated by Denise & Michael Okuda.

Sunday, August 14th is the next significant date marked on all our calendars; The History Channel will air 50 Years of Star Trek. It’s been a long gestating project, the first interview for which was shot way back in December of 2012. Produced by self-described fanboy Joe Braswell, the two hour documentary is painstakingly packed with a host of renowned crewmates including D.C. Fontana, John D.F. Black, Whoopi Goldberg, Jonathan Frakes, Jeri Ryan, Doug Drexler, John DeLancie, Nichelle Nicholas, Walkter Koenig, Michael Dorn, Ronald D. Moore, Brannon Braga, Michael Sussman, and many more. Most significantly however, the documentary will feature one of the final full-length interviews with Leonard Nimoy in which he shares on-set memories as well as his personal philosophy that spun out of five decades of playing Mister Spock.

50 Years of Star Trek will not simply be a glorified DVD extra. Braswell tells TrekNews.net “the real challenge was to make it compelling for the uninitiated without repeating some of the same things that have been done over and over.” Along with director Ian Roumain and Executive Producers Brian Volk-Weiss and Mark A Altman, “as Trek fans and Trek historians, we’ve seen every single Trek documentary in existence.” They are determined to deliver something special for this significant anniversary. Volk-Weiss assures that “We focused on the talent and the crew of the entire series, so it had a scope that felt like 50 years of work, and not just one series or the movies. We also worked hard to find new information that had never before been said on camera. Leonard Nimoy, for example, to the best of our knowledge, revealed many new facts in his interview.”

Along with those essential shipmates that made Star Trek the pop culture phenomenon we’ve been obsessing over for the last half century, the producers also reached out to a slew of celebrity Trekkies & Trekkers to get their take. Lifelong enthusiasts like Bruce Campbell, Michael McKean, & Olivia Munn all share what Star Trek has meant to them throughout their career. Producer Braswell says they were lucky that “Star Trek Fans are very enthusiastic and vocal. For whatever reason, Trek fans want the world to know how much they love Trek! This made it easy to find celebrities and influences who were thrilled to talk about their love of Star Trek.” As a fan it’s a significant treat to discover who was inspired by Star Trek, and by which spin-off they first felt that tug of The Final Frontier.

When asked what was the biggest surprise of the interviewing process, Joe Braswell simply states, “Lucille Ball! That’s all I’ll say. I’ll let you watch the Doc to find out why.” After 50 years, Star Trek still has plenty of surprises left for its fans. Set phasers to record when the show premieres on Sunday, August 14th at 8PM on The History Channel.