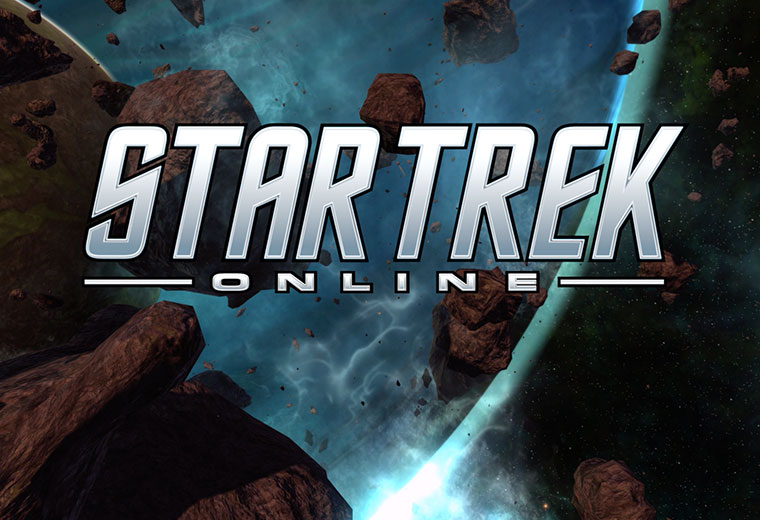 Initial impressions of the console port are overall positive. Developer Cryptic had a large presence at the convention, with multiple PlayStation 4s set up to demo the game, and there were always lines for each console. The most immediate difference we noticed from the demo was the rebuilt graphics engine Cryptic has utilized in this version of Star Trek Online. The game now harnesses the power of Microsoft’s and Sony’s consoles to produce advanced lighting effects and sharper textures, meaning the game looks much better than its PC counterpart. That’s not to say the game’s graphics are on par with more popular, high-budget titles; character animations, screen transitions, and world geometry seemed still a little rough, but such is usually the cost of developing a MMORPG (massive multiplayer online role-playing game). 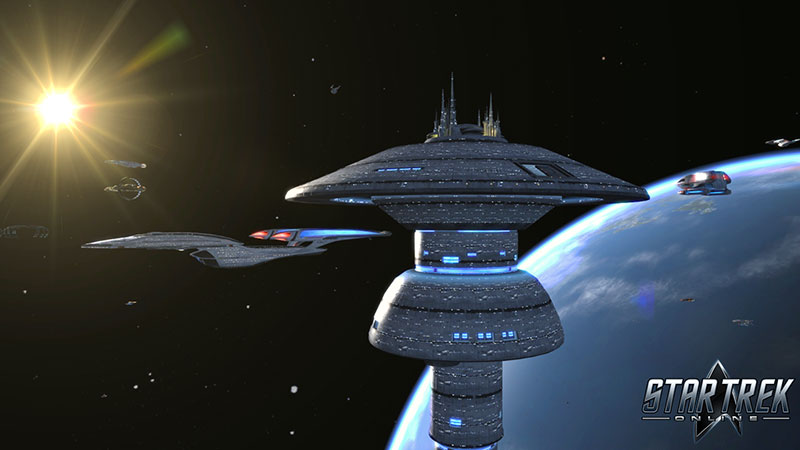 The other significant change to the game is the move from the keyboard and mouse control interface to a standard Xbox One or PlayStation 4 controller. This was one of the most challenging aspects for the team, as they had to adapt a 72-button keyboard and mouse layout onto a seven-button console controller. This transition seems to have come through well in the demo version of the game, as captain abilities are now mapped to certain buttons, and the game utilizes a radical wheel to combine multiple abilities into an easy-to-use interface. The simplified control scheme brings with it a redesigned user interface, which means the screen seems less cluttered than what PC players use. This will surely help new players experiencing the game on consoles who might otherwise be intimidated or confused by the overloaded interface. 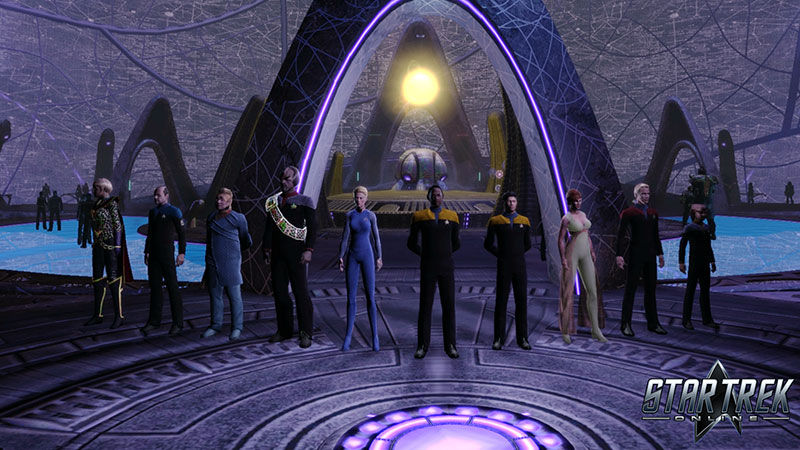 While there was no network connectivity issues with the demo missions, as expected, it will be interesting to see whether STO succumbs to any connection issues once players descend on the game. This worry aside, it seems like Cryptic has successfully transitioned the game to consoles with a thorough porting process. We’ll have more thoughts once we get our hands on the final release version.

Steve Ricossa has been with Star Trek Online for eight years, which means he worked on the game before it was even released. For the last two years, he has been executive producer, heading the mammoth task of transitioning the game to consoles. This shift was inspired by the success of Neverwinter, a game also published under Arc Games and originally a PC-exclusive before moving to consoles. Now, witnessing Star Trek Online move from PC to consoles is a labor of love by Ricossa and his team.

“I’ve come up the ranks as I’ve been working on this project, so it is something that’s very close to me,” said Ricossa. “It’s something I’m really proud of. The team puts a lot of time and effort into it, and we are all Star Trek fans.” 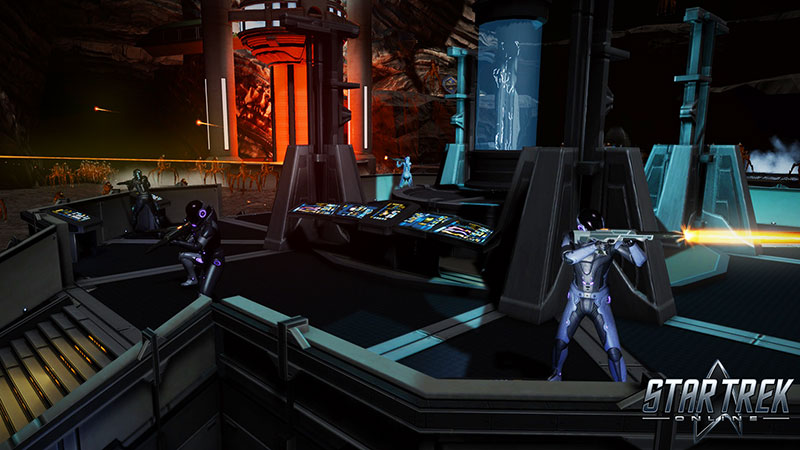 If there’s any doubt that the folks behind Star Trek Online aren’t fans of the franchise, the research process for creating the game’s episodes should put those fears to rest.

“A lot of the research happened before any of us even worked here,” related Ricossa. “We were watching all that Star Trek before we even joined Cryptic. A lot of the research is just going and watching episodes and movies. For example, for the Delta Rising expansion, everyone that had to make big creative decisions did a full rewatch of Voyager. We came up with a list of 20 episodes that the rest of the team had to watch. We had to think of which aliens we wanted to feature, so we sat down and watched every episode. A lot of us did a full rewatch of The Original Series for our latest expansion, Agents of Yesterday, too.” 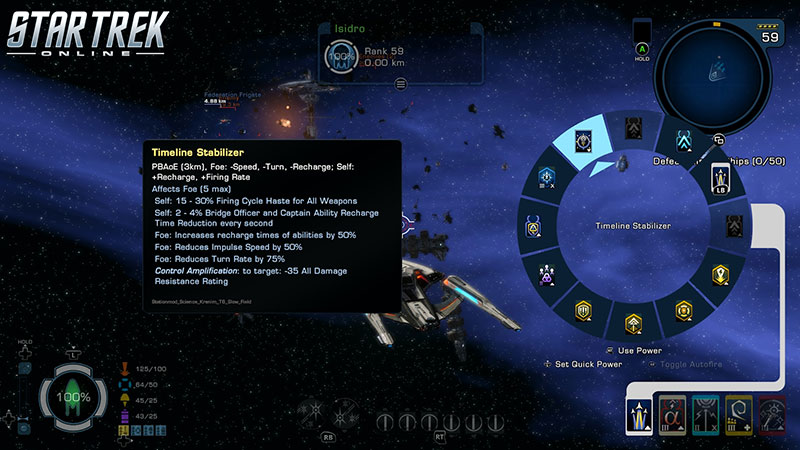 Over time, Star Trek Online has grown in more ways than one. The game that shipped at launch is much different both stylistically, graphically, and structurally than the one players experience today. This maturing process didn’t happen easily, and was the result of fan feedback over the last seven years.

“We hoped we’d be going it in 2016 when the game first launched, and we had no way of knowing if we’d make it this far,” said Ricossa. “The game came out and we were proud of it, maybe a little rougher than we liked, but over the years now it’s a completely different game. It’s not just content, its improved graphics, and user interface, which has even been going through iterations on PC, the endgame content, and fleets [one of the game’s social aspects]. There’s just so much to do now. Now people have a hard time picking out everything they want to accomplish.”

Dedicated players who have been playing the game on PC might be disappointed to learn that there are no legacy rewards for players making the transition to consoles, and there is no way that players can transfer their captains. This was a decision made in the interest of “keeping a level playing field” for the console environment.

It’s no secret that Star Trek and video games don’t always mix. According to Metacritic, the highest scoring Star Trek game is 2000’s Star Trek: Voyager Elite Force, which holds an 86 on the aggregation website. Obviously, few games from the last decade were critically or commercially successful, and many were just forgettable. Ricossa offered his thoughts on why Star Trek, a popular franchise with a huge fan base, and video games, a successful and growing medium, have a hard time clicking.

“I think fans have a very particular taste and expectations of what they expect out of a Star Trek game, and I don’t think that’s universal,” said Ricossa. “I think all fans have different expectations, so it’s hard to hit the entire set of Star Trek fans. I feel like Star Trek Online does a good job because we focus on the story. We bring back the actors, we tie up loose ends from certain episodes, and I think that gives us kind of an edge. The game itself is still incredibly strong. I think the episodes are definitely a strength. We have sort of this Netflix thing where you can play through all of a season before starting a new one. You get this great story and it just keeps going, and each one feeds into the next. It’s something that we are really proud of.”

TrekNews.net will have more hands on with Star Trek Online when it releases today. Look for our thoughts in the coming days, and download it now on Xbox One and PlayStation 4.

Check out the Star Trek Online developer preview video below.