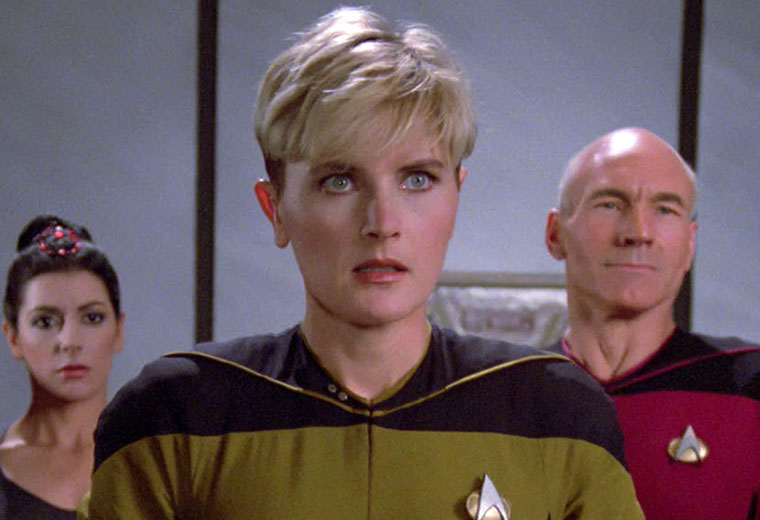 Denise Crosby, who played Tasha Yar on Star Trek: The Next Generation, appeared at the Star Trek Mission: New York convention over the weekend, and TrekNews.net was able to talk with her one-on-one about her voice work in Star Trek Online, her time on TNG, and the possibility of a third Trekkies documentary.

Crosby was present at the Star Trek Online booth on the show floor, where she was promoting the game’s release on Xbox One and PlayStation 4. She related to TrekNews.net that the unorthodox way she was alerted to her character’s role in the game.

“I was starting to hear rumors from the fans that [developer] Cryptic was involving Sela in Star Trek Online,” said Crosby. “And I thought, ‘really?’ I figured I had to reach out to those guys and see who was going to voice the character. I happened to be at a convention in San Francisco, and a fan raised his hand and asked me about appearing in Star Trek Online. I said, ‘I know, I’m trying to get ahold of [Cryptic].’ As it turned out, somebody in the audience stood up and said, ‘Mrs. Crosby, I’m the lead designer of Star Trek Online, and we’d love to have you.’ So I thought, why not do it?”

Star Trek Online is actually not Crosby’s first appearance in a Star Trek game. She appeared in Star Trek: Armada, a real-time strategy released in 2000 by Activision. The game also saw Patrick Stewart, Michael Dorn, and J.G. Hertzler reprise their Star Trek characters. However, Crosby related how different her involvement was in this game compared to Star Trek Online. 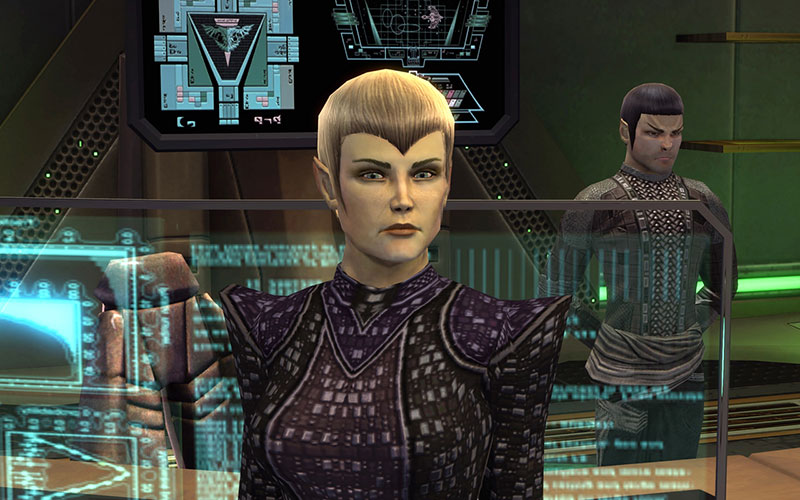 Crosby as Sela in Star Trek Online: Legacy of Romulus

“[Armada] was a far cry from what Cryptic is doing [with Star Trek Online],” said Crosby. “The recording of it was very cut and dry. I had no idea what [the developers] were doing with the story or my character, and I didn’t have any creative control.  Unlike Cryptic, where they asked me if there was anything I wanted to do with Sela. That’s unheard of. When I was recording the voiceover, they were talking me through the story, so I had some context with which I was acting. [The two games] were just such a different experience.”

Star Trek in video games has a somewhat mixed history, with most titles released in the last decade being a critical and commercial letdown. Crosby provided her opinion on why Star Trek Online is an anomaly in this respect.

“I think the way Cryptic is handling Star Trek Online is absolutely compatible within the context of the show,” Crosby said. “Players are generating their own missions [with the Foundry, the in-game mission creation tool], and the developers themselves are tying up loose ends left from the various shows.” 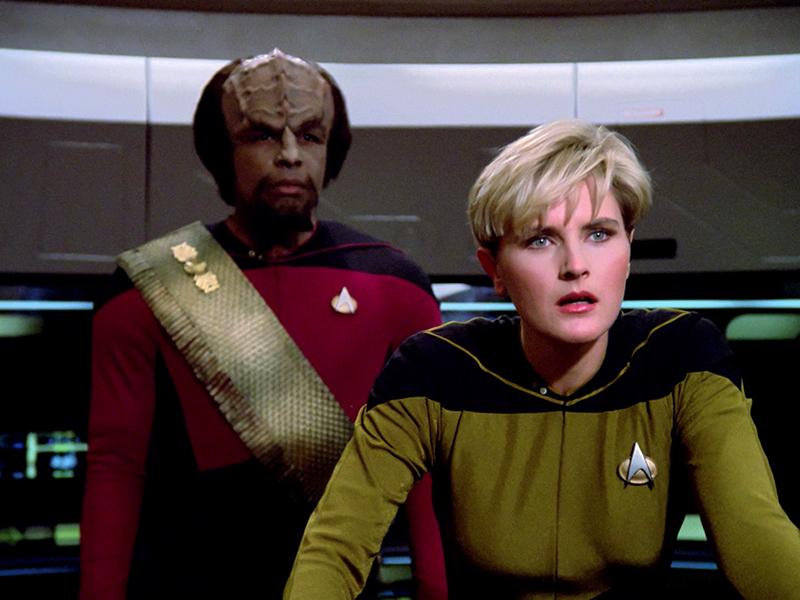 Denise Crosby as Tasha Yar in TNG’s “The Naked Now”

Crosby then switched gears and related her experience on The Next Generation, and what it has been like to continue to be involved in the franchise after only being a regular cast member for less than a season.

“During the show’s first season, I was hoping that the writers and Gene Roddenberry would tell me that there was going to be a change in the show’s writing, that we would have storylines that the characters would all follow,” said Crosby. “But Gene basically said it wasn’t going to change. Then I had to make a decision. Was that going to be satisfying for me as an actor? I saw no other choice. By the end of the first season, I was really getting to feel miserable. And that isn’t fair. You want to be doing something that you really love, so I thought better to leave. But I’ve come back and was still able to be a part of the Star Trek phenomena. And I continue to do other things, like go to conventions. I’ve sort of had the best of both worlds.”

When asked about what it was like working with Gene Roddenberry, Crosby commented on the man himself what could have happened to make her stay on the show past the first season.

“He was a very kind and loving man, and very generous with us,” said Crosby. “He was very excited about putting the cast together, and putting Star Trek back on the air. He gave us a lot of creative freedom. But in the late 1980s, television shows were just starting to take a different turn. You had multiple cast members, and multiple storylines. And he wasn’t following that model. I wish he would have, because I think the show would have been more interesting. I probably would have stayed on.” 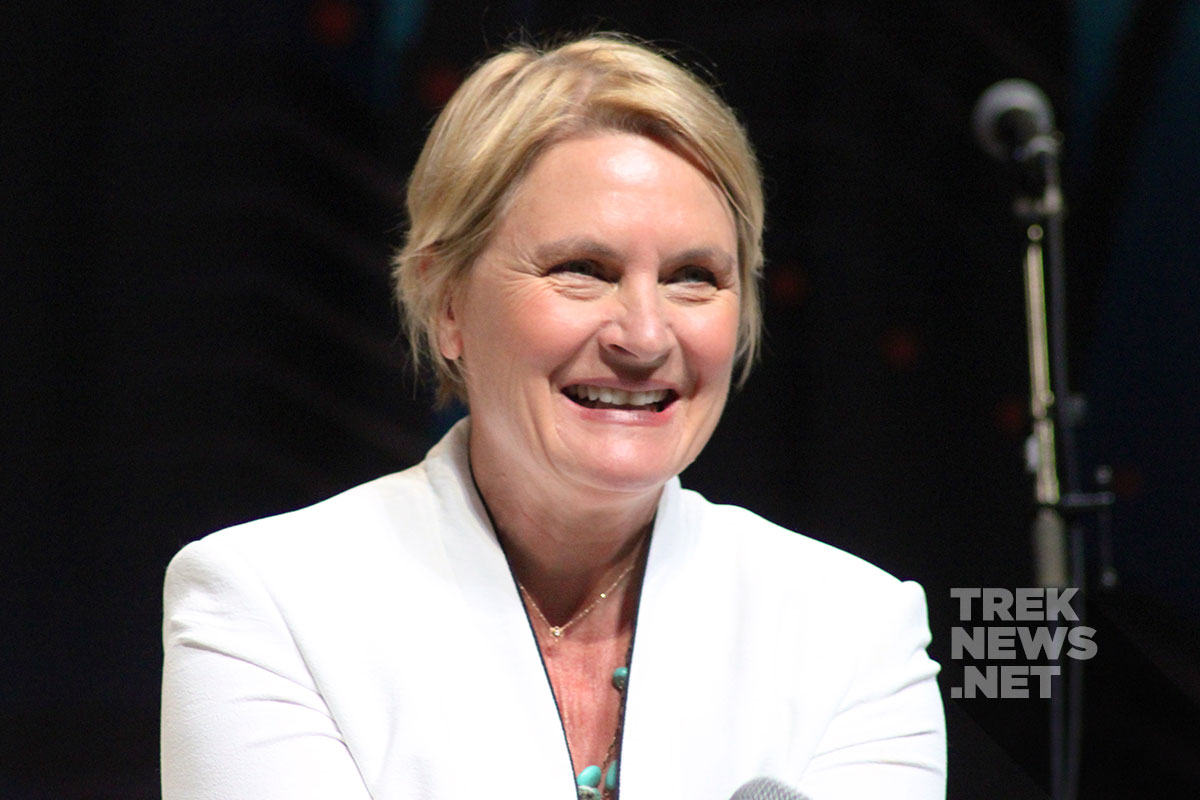 Crosby on stage at the 2014 Las Vegas Star Trek Convention

Finally, Crosby mentioned the potential for another documentary about Star Trek. The first two she produced, titled Trekkies and Trekkies 2, were released in 1997 and 2004, respectively. The docs investigated the phenomena of Star Trek fandom.

“We do want to make a Trekkies 3,” said Crosby. “In earnest, we’re hoping to get started in two more years. We have to time it with the rights and all the legal stuff. There’s a lot of politics involved. We approached CBS/Viacom/Paramount [who own various rights to Star Trek] already and there’s interest. So fingers crossed. When producing these documentaries, I’m always delighted by the surprise at something we didn’t expect, such as the stories people tell and interacting with the fans, hearing stories. I never get tired of it.”

Stay tuned to TrekNews.net for post-convention coverage of Star Trek Mission: New York, and our thoughts on the latest version of Star Trek Online.