TrekNews.net recently caught up with Manu Intiraymi (“Icheb” from Star Trek: Voyager) to talk about his time on the show, life after Voyager, and his unique, multi-genre fan-focused Kickstarter project, The Circuit.

Intiraymi came onto Voyager in 2000 as “Icheb,” the young man who had been a Borg drone before joining the Voyager crew. A novice, 22-year-old actor at that point, Intiraymi related the story of how he landed the role.

“I was cast on Voyager by a man named Ron Sterma, and Ron gave me my first job ever on a movie called Senseless with David Spade and Marlon Wayne in 1998,” said Intiraymi. “I was working with them and it was my first job. I was nervous, because I wasn’t from Los Angeles. I was from out of town. I was blown away by the spectacle of a movie production. Suddenly I’m working with two famous people. This was the real deal. I did so many takes that I remember the director started yelling to nobody on set in particular, ‘This horrible actor, what’s this guy’s problem?’ The director grabbed me by the shoulders and got in my face. It was just a horrible day. But that got back to Ron, that I was terrible, so two years later I’m auditioning for Voyager and my agent and Ron are getting a pedicure together, and my agent tells Ron that I’m auditioning for Voyager. Ron says, ‘Oh not that guy, he was awful! We can’t hire him.’ My agent got mad and yelled at him, and the lady who was doing his pedicure cut his foot, so he used that and said, ‘Ron, I cut my foot, you are going to see my client. I’m bleeding for my client! You are going to at least read him.’ And so they brought me in and I read.”

Even though Intiraymi landed the audition, he still had a long way to go before he would become a recurring character. As it turned out, Icheb was one of five young Borg that joined the Voyager crew at the same time, so the task of sticking with the cast meant Intiraymi needed to prove his ability to the cast and crew.

“At the time, I was auditioning for a character called ‘First,’ the character that was the bad Borg, but I didn’t get the part. But the production crew said they wanted me to play another character, a second Borg,” said Intiraymi. “I was bummed out about it, you know? I wanted to play the bad guy. The bad guy ended up dying and the other Borg ended up staying on ship.

“I don’t know if this is the truth, but I don’t know if they had a plan in set, I don’t know how far ahead they were. All of a sudden, they had five Borg kids on the ship, so what were they going to do with these five kids? I don’t know if they knew. As the episodes went by, after the fourth episode, they found a home for the other kids, and they kept me on board. That felt like a test episode, to see if they would keep my character or not. I think they were testing to see if I could carry an episode. I remember Brannon Braga coming down to the set and shaking my hand and saying, ‘Hey, you’re doing good work on the show, I like having you around.'”

The episode Intiraymi is referencing is the season six installment called “Child’s Play,” where Icheb returns to his home planet and his parents after being assimilated by the Borg, and subsequently severed by the Voyager crew. This episode is only one of 11 in which Intiraymi would guest star.

Like most actors appearing on Star Trek, a substantial amount of research was needed to become in touch with the lore, characters, and themes that began with the Original Series in 1966. Intiraymi was no exception, and while he had a little exposure to the franchise beforehand, he found a thorough review of previous material was needed.

“I was a fan of the films, but I didn’t watch the shows. I wasn’t up on The Next Generation or Deep Space Nine, but I had watched First Contact and Generations, so I was a Star Trek film fan,” said Intiraymi. “When I got the role, I did a lot of studying, and a lot of watching previous episodes and I got the idea of who everybody on board was. I knew I was going to be working a lot with Robert Picardo (“The Doctor”), and I knew I would work with that hot Borg lady (“Seven of Nine,” as played by Jeri Ryan). That was pretty exciting! Jeri turned out to be just one of the coolest, funniest people to work with.”

Oftentimes, actors coming into a series late into its run aren’t always welcomed on set. Being the “new guy,” additions to a cast have to prove they deserve to work on a show where many people have dedicated much of the previous years. The Voyager cast, however, proved to be more welcoming.

“That was the neatest part about the whole experience. A lot of times, when you come onto a new show as the new guy, the cast sort of treats you on the outs for a while. You have to earn your stripes,” said Intiraymi. “On Voyager, I was immediately welcomed. Everybody was really kind, and they were like, ‘hey new kid, what’s up? You want to run the scene? Can we help you?’ It was a team atmosphere, and it was beautiful. I really haven’t seen it since.”

Soon enough, Icheb proved to be a legitimate Voyager crewmember, and Intiraymi began working with the likes of Kate Mulgrew (“Captain Janeway”), Robert Picardo, and Jeri Ryan. Working with such veteran actors, Intiraymi had his work cut out for him. However, it turned out that, at least in one instance, Intiraymi was able to inject a newfound energy into the aging show and its cast.

“Something happened to me early on that gave me confidence. I found all these actors to be really talented people. I worked with Kate and Jeri and Robert more than anybody else. They were just so good at what they did that I just stole as much as I could from them,” recalled Intiraymi. “I remember maybe four or five episodes in, Robert Picardo pulled me aside and he said, ‘You know, you are one good young actor, you know it? Every once in a while, one of you guest stars comes along and wakes the rest of us up. It makes us glad to be here again. You woke this cast up.’ He gave a pat on the back and walked off. That was so cool.”

Unsurprisingly, Star Trek become a daily occurrence for Intiraymi after Voyager wrapped in 2001. Especially as a regular on the convention circuit, Intiraymi has experienced the best of Star Trek fandom, in addition to working with many cast members from each Star Trek series.

“The neatest thing about the Star Trek experience was when I found myself sitting on stage on the 50th anniversary of Star Trek,” related Intiraymi. “On my right is Nichelle Nichols (“Uhura” from The Original Series), on my left is Walter Koenig (TOS‘s “Chekov”), and after Walter was Jonathan Frakes (TNG‘s “Riker”). Then all the way to my right was Rod Roddenberry (son of Star Trek creator Gene Roddenberry). It was a magical experience. The audience was asking kick-ass questions and they were giving us all this love. For me, this is from work I did 15 years ago. There’s still all this outpouring of love. It is touching. It just floors you on a regular basis. Sometimes, somebody says something that affects your heart, and just really beautiful things happen because of Star Trek and the convention scene. Star Trek is a gift that keeps on giving. The second year of Voyager, I started on the convention circuit and went to Italy and Rome and all over the world, meeting different fans and cultures. Star Trek really gives you that opportunity to go and meet other cultures. It is a magic thing that men and women have come together and created these shows.” 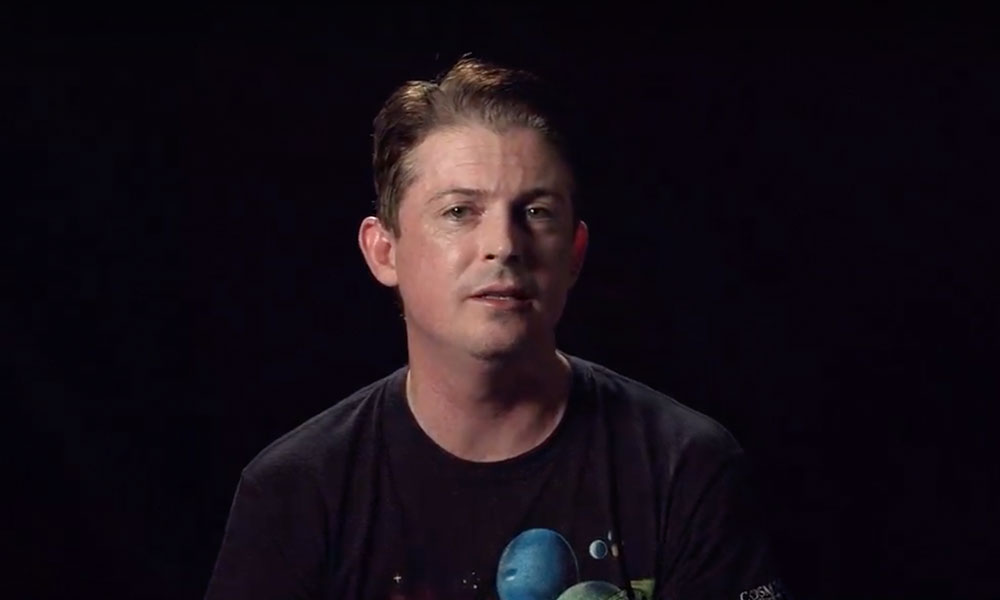 Intiraymi’s work on Star Trek and his experience on the convention circuit has lead him to a passion project, which is currently in the funding phase on Kickstarter. The project, a multi-genre anthology film called The Circuit, is an attempt at a type of film that has never been done before.  Ten separate stories constitute the film’s plot, and each story is based on either an actor’s or a fan’s experience at a convention. On screen, the film stars several Star Trek alumni, including Deep Space Nine veterans Armin Shimerman (“Quark”), Terry Farrell (“Dax”), J.G. Hertzler (“Martok”), and Hana Hatae (“Molly O’Brien”), as well as Voyager alumni Robert Beltran (“Chakotay”), Robert Picardo, Ethan Phillips (“Neelix”), and Tim Russ (“Tuvok”), among both other science fiction actors and other Star Trek actors.

“The Circuit is 15 years of stories gathered together that I had to tell, mixed with genre television,” said Intiraymi. “I love genre television and I don’t think there’s enough anthology productions. There’s a new show called Black Mirror that is a sci-fi based anthology series, so I thought the perfect mix would be Galaxy Quest meets The Twilight Zone, and then sprinkle in some real truth and real events in there. The audience would have to question how much of this is true.”

The Circuit is a tribute to the fans who have attended convention events over the last 50 years. Thus, it only made sense for the fans to be involved in the creation of the anthology movie. Instead of a cameo role or subtle mention, Intiraymi decided to allow fans to submit scripts for the anthology movie, or even possibly join the production crew. This idea dawned on him in the midst of an actual convention.

“I was standing on stage and I was looking out at the audience. I started making eye contact with the 7,500 people that were there, people that I had shared genuine experiences with. I knew their story, and their stories were interesting and it just dawned on me that it was super important to include the fans. So when we got the project together, we immediately decided to open the writing process to whomever wanted to submit a script.”

Fans who are interested in submitting a screenplay can visit thecircuitfilm.com and follow the directions for submitting their ideas. If you donate to the project’s Kickstarter, you can also send a letter to Intiraymi at info@circuitfilm.com for a chance to become part of the production team. The film’s producers will choose one fan to join each department on the movie, meaning a few lucky fans can work in the makeup and wardrobe department, or assist the camera operators as they film the movie.

The film already includes crew from many professional projects, including Beowolf, Iron Man, Hellboy, Starship Troopers, and Arrow, as well as Star Trek projects For the Love of Spock and Renegades.

“We really want this to be the most fan-collaborative project anyone has ever done,” said Intiraymi. “I’m really excited and looking forward to see what happens. Hopefully the fans are as excited about the film as we are.”

Fans can donate anywhere from $5 to $10,000, and the project has until October 31 to meet its $200,000 goal. This goal will allow Intiraymi and his team to produce the first story of the anthology, and the team’s ultimate goal of $1.5 million would assure the entire 10-part anthology can be produced. Assuming the original $200,000 goal is met, the first installment of The Circuit is scheduled to arrive in Spring 2017.

Kyle Hadyniak has been a lifelong Star Trek fan, and isn’t ashamed to admit that Star Trek V: The Final Frontier and Star Trek: Nemesis are his favorite Star Trek movies.