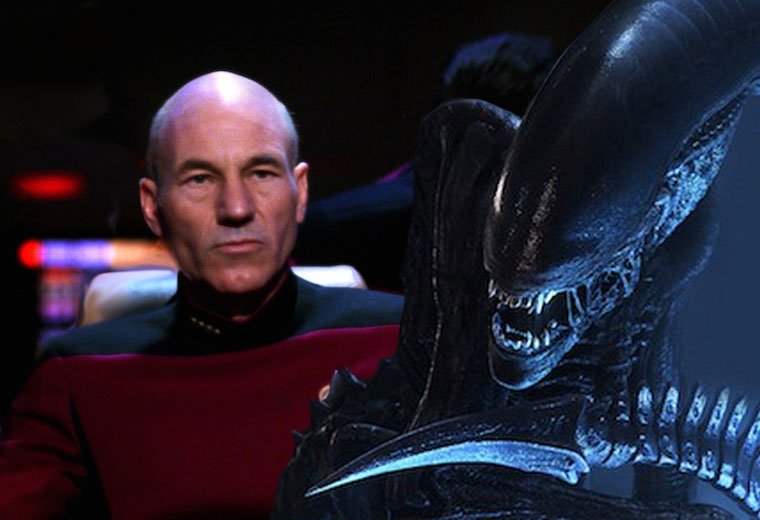 Unveiled at the MCM London Comic Con, the new series is scheduled to hit stores next spring and will coincide with TNG’s 30th anniversary.

“We’re beyond excited to team up with Dark Horse for this unique miniseries,” said IDW Editor Chris Cerasi. “With Scott and David writing and J.K. handling art, the blending of the Star Trek and Aliens worlds is guaranteed to be a fun, scary, thrill-a-minute ride!”

The new TNG/Aliens series builds upon IDW’s Star Trek line, that already includes the Kelvin Timeline series “Boldly Go” and “Waypoint,” which set within the Prime Universe. IDW also has a Star Trek/Green Lantern crossover set for release this December.

IDW’s combined Star Trek: The Next Generation and Aliens logo

October 28, 2016 – As announced today at the MCM London Comic Con, Captain Picard, Data, Worf, and the rest of the iconic Starfleet crew will soon come face-to-face with facehuggers in STAR TREK: THE NEXT GENERATION / ALIENS. Just in time to celebrate The Next Generation’s 30th anniversary, the TNG crew of the Enterprise will take on the Aliens from the wildly popular movie franchise in the upcoming miniseries from IDW Publishing and Dark Horse Comics. The story, written by regular Star Trek scribes Scott Tipton and David Tipton, will see these two giants of modern science fiction cross over for the first time. In addition to the Xenomorphs, it will feature familiar Star Trek alien races such as the Borg and the Romulans, each of which will play a vital role in the plot and be brought to life by artist J.K. Woodward, who will be re-teaming with the Tiptons after previously collaborating on the acclaimed Harlan Ellison’s City on the Edge of Forever series.

Stay tuned to TrekNews.net for all the news related to the TNG/Aliens crossover comic book series.