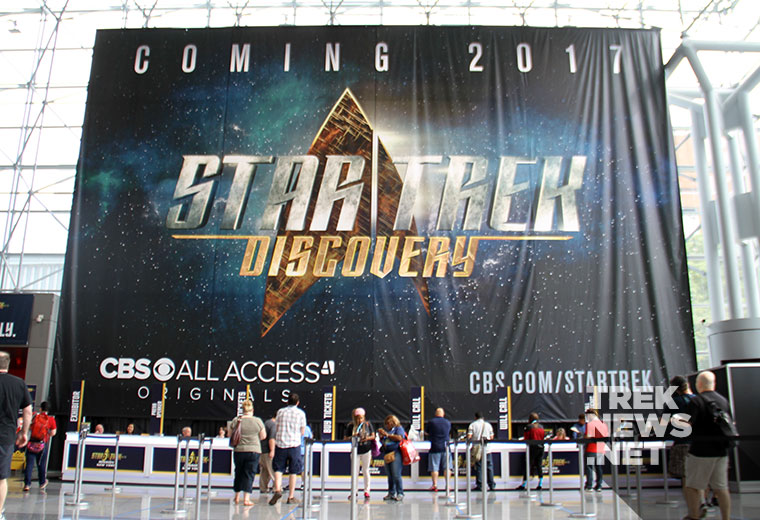 Much to the chagrin of Star Trek fans around the globe, Bryan Fuller will no longer be the showrunner for Star Trek Discovery.

News broke last week that Fuller would be stepping down and handing the reins off to the writing duo of Gretchen Berg and Aaron Harberts. So, who are these new writers, and what does that mean for the show?

Who are the new showrunners?

Berg and Harberts cut their teeth writing in the late 90s on Beverly Hills, 90210. From there they transitioned to Roswell, working under another veteran Trek writer, Ronald D. Moore. The pair first worked with Fuller, writing three episodes on his short lived series Wonderfalls. Four years later they would rejoin Fuller on Pushing Daisies, contributing another three episodes on that show. Since then, they’ve written and served as executive producers on five shows, most notably Revenge and Reign.

Fuller brought Berg and Harberts in early on, so the two have been involved with the development of the show for some time now. Though they have never run a show before, Fuller has the utmost confidence in them.

Riker spent 7 years of TNG unready for Captaincy, @GretchenJBerg @AaronHarberts are ready. Thrilled to see them in command of the Bridge.

Just because he’s stepping down doesn’t mean that Bryan Fuller’s going away.

A press release from CBS explains that workload on Fuller’s other two shows – an adaptation of Neil Gaiman’s American Gods and a new Amazing Stories for NBC — got to be too much when combined with his work for Discovery. Rather than delay the series again, the decision was made to promote Berg and Harberts to handle Discovery’s day to day needs.

While this will almost certainly means more creative input for Berg and Harberts, the writers will be following an outline put forth by Fuller. According to Variety, Fuller wrote the first two hours of the show and laid out the “broader story arc and mythology” for the remainder of the first season. CBS is reportedly happy with what Fuller has done so far, so now it’s up to Berg and Harberts to fill in the rest.

Bryan, you're my brother, mentor & friend. We will continue what we started & make you proud. I love your gorgeous heart & soul. Thx. xxoo https://t.co/V4tOpxVauy

Along with the same announcement was news that Academy Awarding winning writer Akiva Goldsman will be joining the staff in a “top creative role,” according to Variety. The outlet reports that Goldsman will provide producing support to Berg, Harberts and Discovery executive producer and co-creator Alex Kurtzman

Goldsman won an Oscar for writing A Beautiful Mind in 2001. He broke into the industry penning several Joel Schumacher films in the early 90s, including Batman Forever and Batman & Robin. After writing many blockbusters in the 2000s, including the Will Smith films I, Robot and I Am Legend as well as The Da Vinci Code and Angels & Demons, Goldsman moved to TV writing on Fringe for Kurtzman, J.J. Abrams and Roberto Orci.

While some of Goldsman’s early works are hit or miss, and Star Trek fans have been burned by Oscar nominated screenwriters in the past, it seems like Goldsman was courted for his producing chops rather than his writing ones, so those fearing his addition will turn Discovery into a repeat of his late 90s reboot of Lost in Space needn’t worry.

With production slated to start this month in order to meet the show’s May premiere, casting news should be out in the open by now, but Variety reports that this is part of the problem. According to their article, most of the actors are in place save for the lead, which Fuller himself previously revealed to be a human female who isn’t the captain.

As if to fan expectant flames generated by the news, The Hollywood Reporter included new details on what the cast of Discovery might look like. According to the outlet’s sources, the rest of the cast will consist of “an openly gay actor as one of the male leads (which Fuller confirmed), a female admiral, a male Klingon captain, a male admiral, a male adviser and a British male doctor.”

The addition of a Klingon captain is particularly interesting. As the Klingons and the Federation were not on good terms when the show is set to take place, this could either the show’s main villain or it could lend credence to earlier speculation that Discovery will chronicle a covert joint mission between the two factions. The inclusion of two admirals and an advisor certainly seems to point towards the later.

At first blush, the news that Fuller stepped down may seem bad, but it seems like everything has been put in place in order to preserve his vision for the show. As the start of production nears, more of what that vision is should be coming clear soon.

The first episode of Star Trek: Discovery will premiere with a broadcast TV special on CBS next spring. That episode and all subsequent episodes will be exclusively shown in the U.S. on the video streaming service CBS All Access.