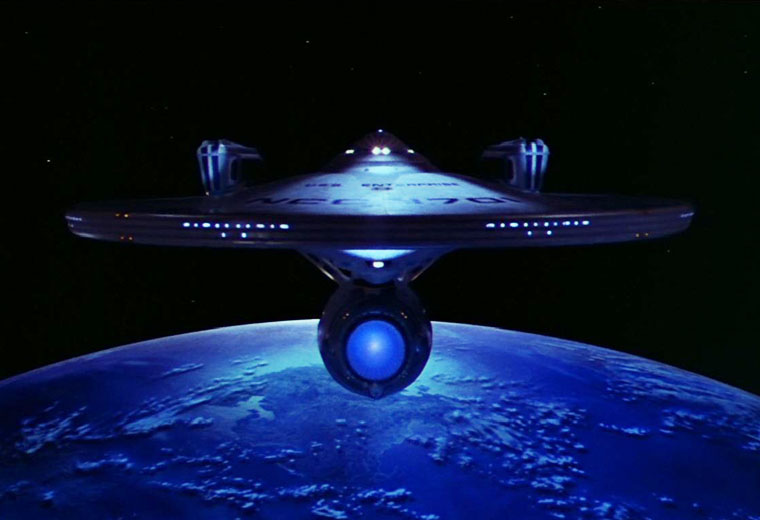 Early in the United States’ involvement in World War II, a 20-year-old Gene Roddenberry, long from being the “Great Bird of the Galaxy,” was flying with the 394th Bomb Squadron, 5th Bombardment Group of the Thirteenth Air Force. While he wouldn’t stay in the Navy for long, Roddenberry would ultimately go on to create one of the most iconic science-fiction franchises of all time, and with it, one of the most recognizable names in history: Enterprise.

The thing is, the Enterprise in Star Trek was not the first ship with that name. Not even close. The name Enterprise has a long, storied history with both the British Royal Navy and the United States Navy. Fifteen ships have been named Enterprise by the Royal Navy, and eight U.S. Navy vessels have borne the name. The vessel most familiar to Gene Roddenberry, the highly decorated World War II-era aircraft carrier CV-6, served as the namesake for Roddenberry’s Enterprise, the Enterprise that to this day is boldly going where no one has gone before. CV-6 participated in more major conflicts in World War II than any other United States ship, witnessing battles such as the Battle of Midway, the Battle of the Santa Cruz Islands, and the Battle of the Philippine Sea. Decommissioned in 1947, the Enterprise ended her service with 20 Battle Stars, the most of any U.S. Navy ship from the war. 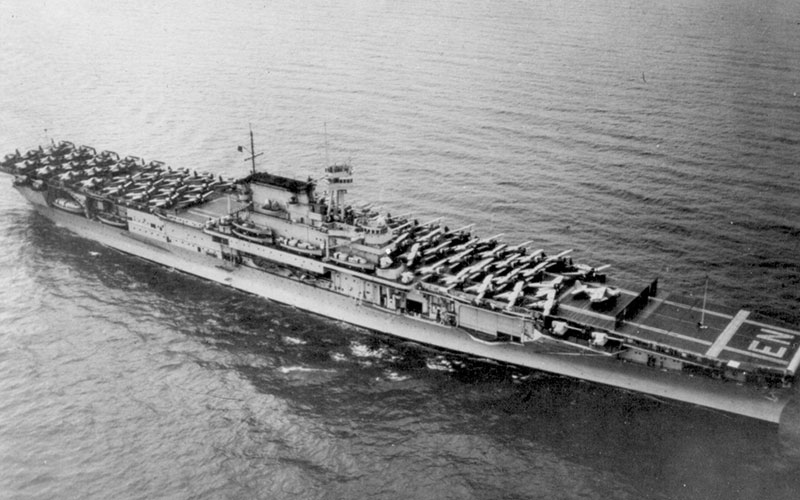 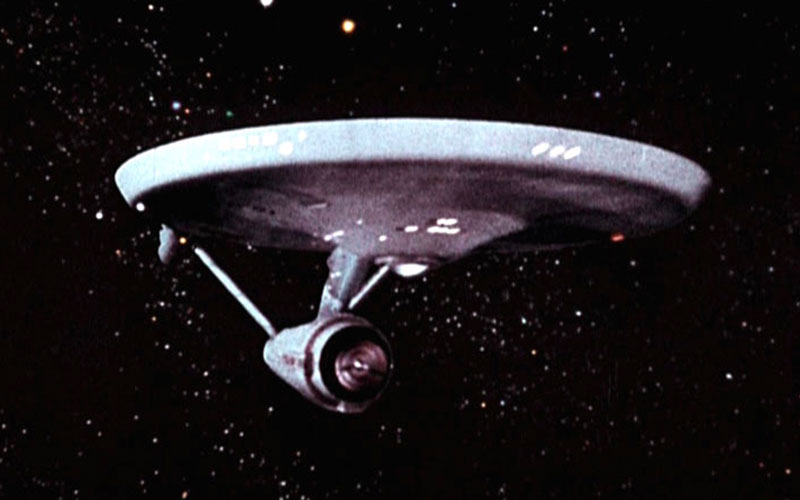 Aircraft carriers are the might of any navy. The United States has 10 currently in service, the most in the world. All are on a 36-month cycle, where each carrier alternates between various cycles of availability. Each carrier costs about $13 billion to build, and the next generation of carriers, the Gerald R. Ford class, will hold more than 75 aircraft. Like small floating cities, these massive ships are 1,100 feet long and 250 feet high, and house more than 4,000 people.

November is a special month for aircraft carriers in general, but also for the legacy of the Enterprise. Designated National U.S. Navy Aircraft Carrier Month by a proposed Congressional Resolution, several vital events in the history of the aircraft carrier have occurred in November. On November 14, 1910, Eugene Ely launched the first plane ever to take off from an aircraft carrier. Five years later, on November 5, the technology that ultimately became the modern aircraft launch system was successfully tested for the first time, forever altering how planes operated from their carrier base. In 1924, the first aircraft carrier in history, the USS Langley (CV-1), reported for duty. And finally, in 1961, the Navy launched the first nuclear-powered aircraft carrier, the Enterprise (CVN-65). In her more than half a century of service, she carried a crew of thousands all around the world, from Southeast Asia to the Middle East. Much like the upgrade from the original Enterprise to the Enterprise-A as seen in the fourth, fifth, and sixth Star Trek movies, CVN-65 was bigger, more powerful, and sleeker than the iconic CV-6. 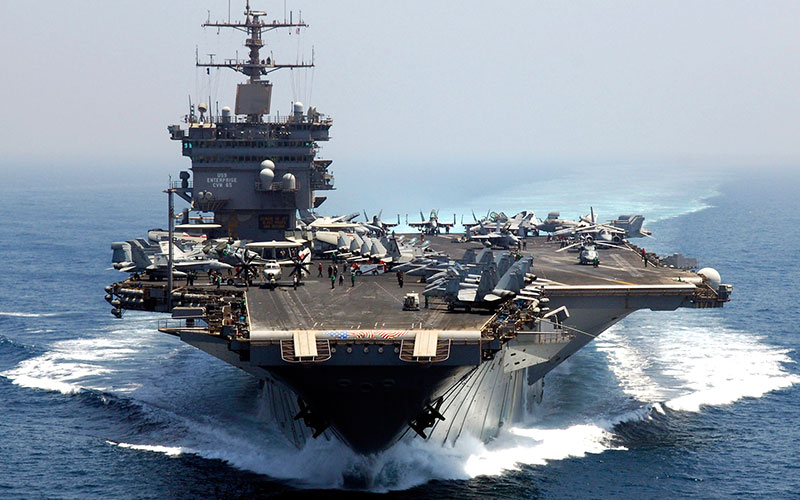 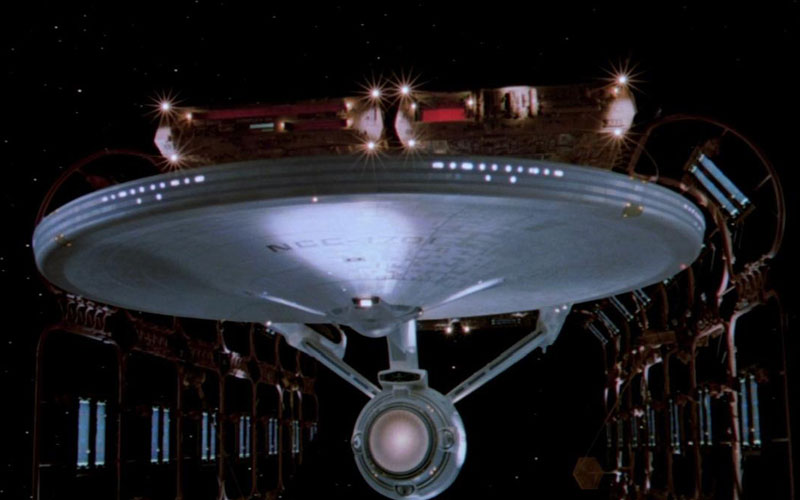 The Enterprise, as seen in Star Trek: The Motion Picture (photo: Paramount Pictures)

Like the Enterprise of Star Trek, the Navy’s Enterprise is a legend. CVN-65, nicknamed “Big E,” was the largest naval vessel ever built at the time of her activation, and she boasted a crew of 4,600. At the time of her deactivation in 2013, CVN-65 had been serving for 51 years, the longest time of any U.S. aircraft carrier. In that time, she participated in some of the most significant events in history. In 1962, the Enterprise was the ship that tracked and measured the flight of Friendship 7, the first manned space capsule to enter Earth’s orbit. In the same year, the Enterprise was part of the U.S. naval force that responded to the Cuban Missile Crisis. Three years later, Enterprise saw combat in Vietnam, and ultimately made six combat deployments to Southeast Asia from 1965-1975. Throughout the rest of the century, the Enterprise was active in the Western Pacific, Middle East, and stateside. Now, the Enterprise rests in peace as an inactive naval unit. But like the Federation fleet, the U.S. Navy can’t go too long without an Enterprise.

That begs the question: if CVN-65 was like the Enterprise-A, which carrier was like the Enterprise-D, a vessel much more advanced than its on-screen predecessor? Well, it doesn’t exist yet, but it’s coming. Upon the decommissioning of the CVN-65, the Navy announced that the new Enterprise was on its way: CVN-80. This Enterprise is scheduled to launch in 2025, and continue the historic legacy of its predecessors. The new Ford-class carrier will have many improvements from CVN-65, mostly geared toward increasing efficiency and preparing the ship for not just current technology, but future improvements. The nuclear reactor that drives the ship is much more powerful, and new electromagnetic systems allow planes to launch more efficiently. In addition, the previous steam-powered systems, like water heaters, are now electric, which decreases maintenance. In fact, everything in the Ford-class has been designed with efficiency in mind, such as the new fluorescent light bulbs that light the ship, or the cargo elevators that require less manpower. These improvements, and many more like them, allow the Ford-class to go 12 years without needing dry dock maintenance. Much like the sustainability of the Enterprise as it travels across the Milky Way, the Navy’s new Enterprise will be able to crisscross the world more independently than ever. 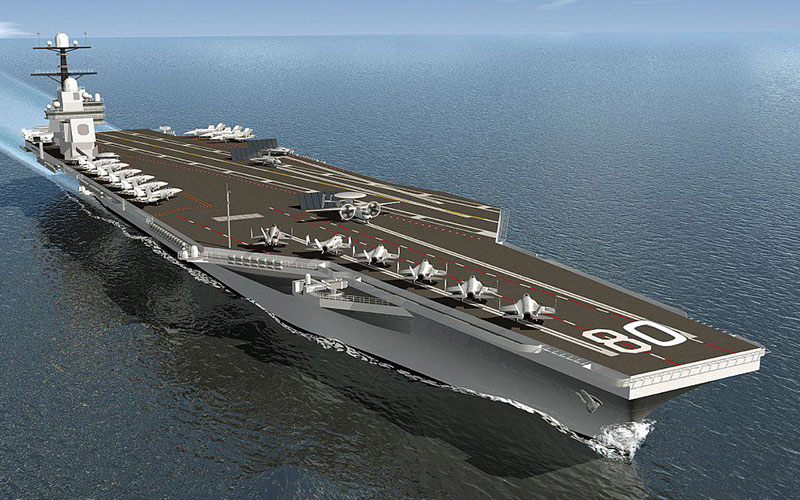 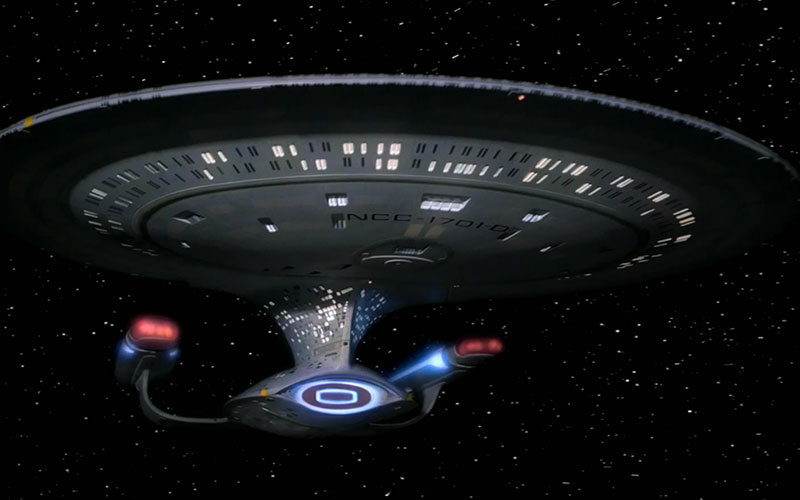 The Enterprise D, as seen on Star Trek: The Next Generation (photo: CBS Home Entertainment)

You wouldn’t be blamed if you see a prevailing theme here. The Enterprise as seen in the various incarnations of Star Trek is itself like an aircraft carrier. In real life, the mammoth carriers fill a variety of roles: projection of power, base of operations, logistical support, airport, and many more. We see the Enterprise do all of these things in the television shows. Once the Enterprise establishes itself in a planet’s orbit, its presence is felt. Shuttles regularly launch for away missions, crew members beam down on peace-keeping missions, and enemies are thwarted thanks to the imposing power of the Federation’s flagship. Such is the role of the Navy’s aircraft carrier. Like how Captain Kirk and Picard use their Enterprise to protect the Federation and the people of the galaxy, the Navy fills the same role for the United States and the people of Earth.

If you want to help celebrate the vital role of aircraft carriers, visit the National U.S. Navy Aircraft Carrier month website to learn more about the flagships of the U.S. Navy and their role in the world.