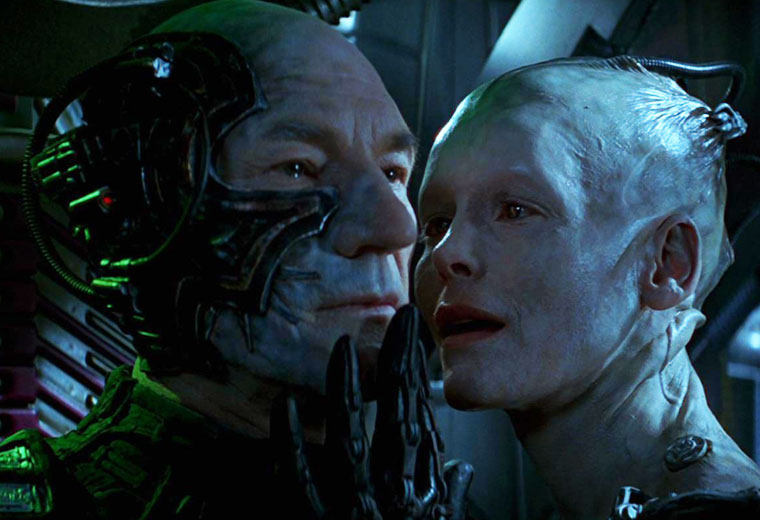 Is it just me or is it absolutely mind-blowing to come to the realization that Star Trek: First Contact was first released in U.S. theaters TWENTY YEARS AGO, today?

When I think back on First Contact, it still feels like one of the newer Star Trek films to me. Maybe that’s due to it starring the TNG cast, which makes it feel more contemporary than the TOS-era films. Or, maybe I’m just getting old and my memory is getting a little muddy.

The eighth Star Trek feature film was the second to star the TNG cast, including Patrick Stewart, Jonathan Frakes, Brent Spiner, LeVar Burton, Michael Dorn, Gates McFadden, Marina Sirtis, along with James Cromwell, as they battle Alice Krige (as the Borg Queen) and the Borg. Directed by Jonathan Frakes and written by Brannon Braga, Rick Berman and Ronald D. Moore, the film hit theaters on November 22,1996 and was the highest-grossing movie on its opening weekend — taking in $30.7 million. With a worldwide total of $146 million, the film is widely considered one the best Star Trek films of all-time.

After being nominated for an Academy Award for Best Makeup, First Contact won three Saturn Awards and would go on to be released on VHS, LaserDisc, DVD, Blu-ray and digital download.

So take some time today and fire up Jerry Goldsmith’s incredible First Contact score and transport back to 1996. It was a wonderful time for Trek and one that should be looked back on with fondness.

Star Trek: The Next Generation celebrates its 30th anniversary in 2017, as the show premiered in September of 1987. The entire series is now available in remastered high-definition Blu-ray.