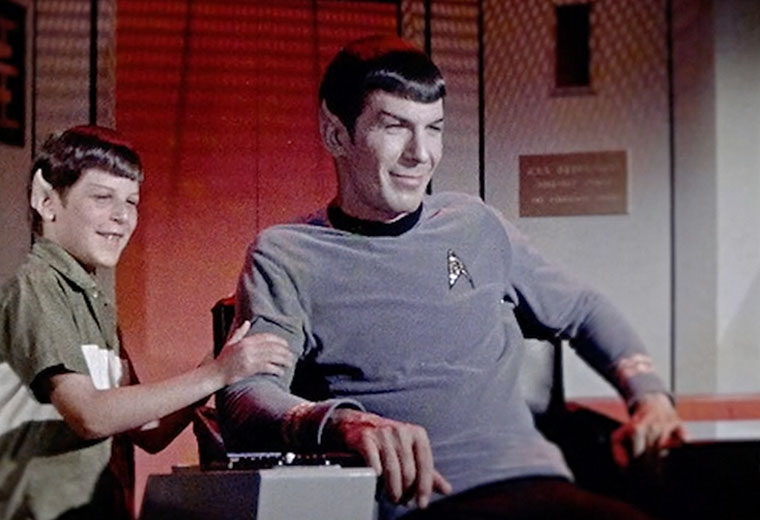 To commemorate Star Trek‘s golden anniversary and Leonard Nimoy’s passing, last year Adam Nimoy released For the Love of Spock, a wonderful and heartfelt documentary about his father, the character he played, and the impact both had on the world.

Even now, just shy of two years after his death, Nimoy’s absence is still felt by millions around the world who love and adore his work. This movie is a perfect way to celebrate Nimoy’s life and contains many interesting facts and anecdotes from his many years as an actor. 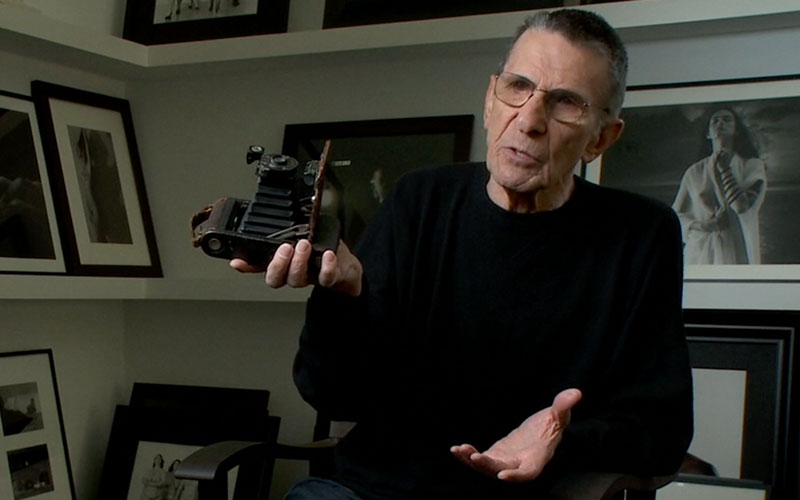 As Adam Nimoy explains early on in the film, he originally conceived of the project as a film just about Spock for the 50th anniversary.

“A documentary about Spock hadn’t been produced before,” he said.

After his father died, he changed the scope of the film to being not just about Spock, but about Leonard the man and his relationship with his son.

While it never detracts from the film, there are times at which it is fairly obvious what was made prior to Nimoy’s passing and what was after. All in all, though, Adam Nimoy could have stuck with the original idea, but the end result makes for a better, more moving film.

There was an about 20 year gap between when Leonard Nimoy moved from his home town Boston to Los Angeles to pursue acting and when he landed the part on Star Trek. Though he acted in between there, Leonard Nimoy explained that he never held an acting job for longer than two weeks during that period. So, in order to provide for his family, he held a series of odd jobs, including:

That last one, Adam Nimoy explained, was a particularly successful endeavor for his father.

“He set [fish tanks] up in doctor’s offices. It was sort of a fad in the 60s and dad had a corner on that market,” he said.

During his down time, Leonard Nimoy did a lot of odd jobs around the house, too, including building a brick wall in their family’s yard.

3. Lon Chaney was his idol

For those who are unfamiliar with the above name, Lon Chaney was a prominent silent film actor who was famous for portraying characters that relied heavily on makeup and prosthetics, most notably as the titulars The Hunchback of Notre Dame and The Phantom of the Opera. For his efforts, he earned the nickname “the man of a thousand faces.”

Chaney’s work was very influential to Nimoy, who explained that he liked getting into makeup and figuring out a character. In those aforementioned 20 years, he took a number of different roles for characters of all walks of life, and his love of Chaney helped him craft those performances.

One of these roles was as a guest star in one episode of the short lived series The Lieutenant, created by Gene Roddenberry. It was this that helped Nimoy land the role of Spock. 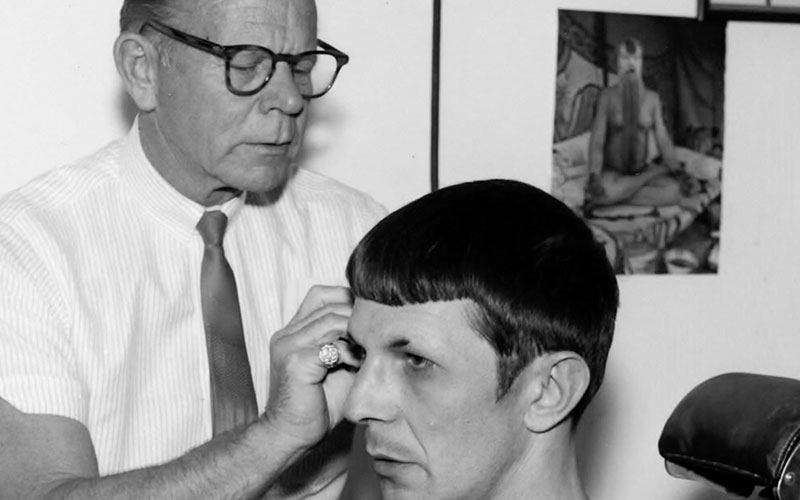 The Spock ears being applied to Nimoy, prior to shooting an episode of Star Trek

4. Spock was created on the fly

In “The Cage,” Spock is very different from how he would be played later in the series. The reason, Nimoy explained, was the captain. Jeffrey Hunter’s Christopher Pike was an internal, quiet character, which lead Nimoy to think he needed to be antithetical to that.

“I felt I needed to try to drive something in opposition to that,” he said.

When Shatner came aboard with a very different performance than Hunter, Nimoy was able to be more internal and reserved.

The next piece of the puzzle came in the next episode that was filmed, which was “The Corbomite Maneuver.” When the Enterprise first encounters Balok’s ship, Spock’s only line during the scene was what would become a signature of his, “fascinating.” Caught up in the commotion that occurred on the bridge, Nimoy’s initial reading was one of shock or surprise. For the next take, director Joseph Sargent told Nimoy to play it more as a scientist and react with a detached curiosity. The rest is history.

Other famous elements of the character – the eyebrow raise, the salute, the nerve pinch – were created later as further refinements Nimoy made to the character.

Though Star Trek was cancelled in 1969, it remained popular enough for Paramount to license out the brand for various purposes throughout the 70s. One of these was for a Heineken billboard ad. Nimoy was unaware of the ad until, when at a dinner in London with Hollywood icon Henry Fonda, Fonda asked Nimoy how much he was being paid for the ad.

According to Nimoy, he was not paid for that ad or any other use of his image after around 1974. So, Nimoy sued the studio. The case would linger for some time until he was able to use the matter in the bargaining process for his contract negotiations for Star Trek: The Motion Picture. Nimoy agreed to look at the script if the case was settled and, an hour after receiving the settlement check, the script arrived at Nimoy’s house.

6. Nimoy did not like Star Trek: The Motion Picture

Nimoy’s comments on the first Star Trek film were brief, but impactful.

The change between that film and the series, he said, was that while the series was character oriented, the film was effects oriented. The Motion Picture, coming just two years after Star Wars, was treated like a huge blockbuster film, with a budget to match and a two-time Oscar winning director at the helm. All that money ended up on the screen in the form of special effects, but lacking character, according to Nimoy.

7. “The training wheels” were off with Star Trek IV: The Voyage Home

After a successful theatrical directorial debut with Star Trek III, Paramount asked Leonard Nimoy to direct the follow up. While Nimoy was open to it, he was not pleased by the level of oversight and micromanagement that occurred by the studio during The Search for Spock’s production.

In a conversation with then studio executive Jeffrey Katzenberg, he told Nimoy, “The training wheels are off… we want your Star Trek movie.”

The film was an obvious passion project for Nimoy. Adam Nimoy later in the documentary interviewed Catherine Hicks, who played Gillian in Star Trek IV, who said that Leonard Nimoy played whale sound at his house during a table read of the script.

8. He struggled with alcohol abuse for 20 years

Making the original Star Trek series required a tough schedule, further exacerbated for Nimoy by the fact that he often made paid appearances on weekends. During the second or third season, Nimoy explained that he began drinking. While it wasn’t much at first, but it grew over the years, coming to a head in the mid to late 80s when several major life events – his parents died, he was going through a difficult divorce with his long-time wife, and others – occurred.

It wasn’t until he met Susan Bay, to whom he was married from 1989 until his death, was he happy enough with his life that he began questioning his drinking problems and, eventually, stopped. 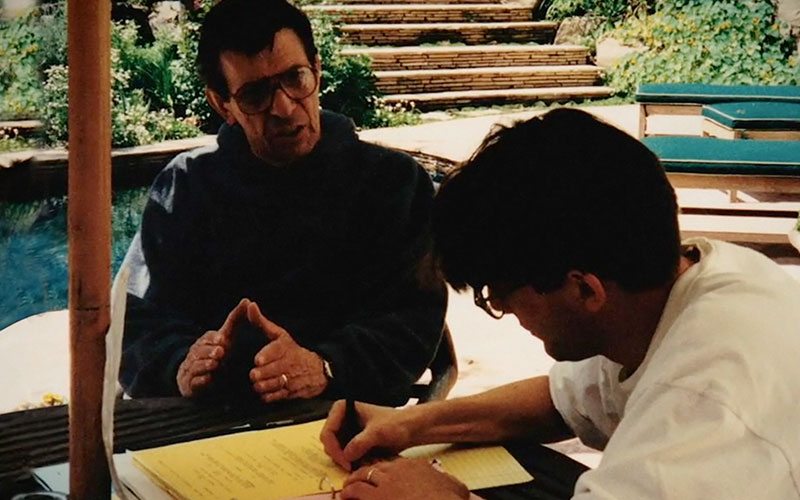 9. He helped Adam become a director

Adam Nimoy went to law school and became an entertainment lawyer, but after seven years of practicing, he realized it was not something he wanted to do the rest of his life. Adam explained he “went through his own 12 step recovery process” and remembered something his father told him: that he should be passionate about what he does. He turned to his father for help, and his father got him into the arts, including directing.

Adam Nimoy’s first directorial credits were the TNG episodes “Rascals” and “Timescape.” Two years later he directed an Outer Limits episode which starred his father. The episode, “I, Robot” was actually a remake of an episode from the original iteration of The Outer Limits that Leonard Nimoy was also in, although he played a different character.

Nimoy worked consistently as a television director throughout the 90s and into the early 2000s, working on such hit shows as Babylon 5, Sliders, NYPD Blue, Ally McBeal and Party of Five. 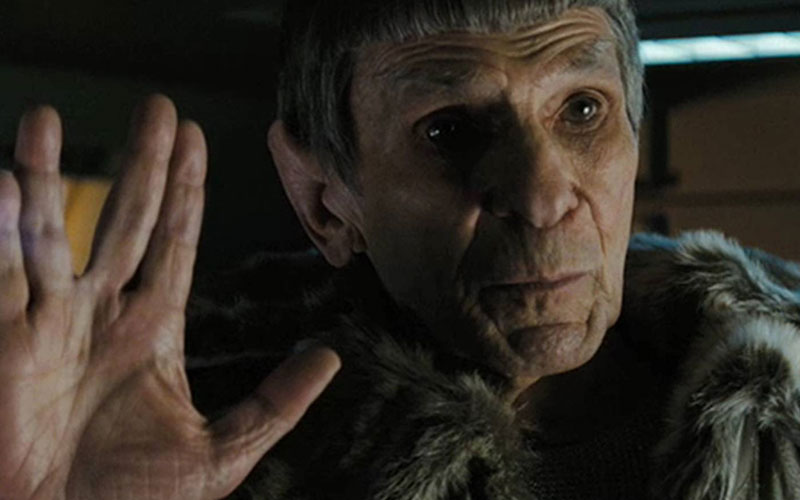 JJ Abrams told a story, which he said he never told publicly until his interview for the documentary, that Leonard Nimoy broke his nose while making Star Trek.

He did not say the scene or what Nimoy was doing, but Abrams explained that Nimoy fell at one point, hitting and breaking his nose.

“When you’ve wounded Spock, you just want to kill yourself,” Abrams said. “It was horrible.”

After ensuring Nimoy was alright and taken care of, Abrams and his production team scrambled to figure out what they were going to shoot the rest of the day, when Nimoy got up and insisted that they continue as planned, which they did.

The film is a treasure trove of information, but this is just skimming the surface. If you haven’t already, seek out For the Love of Spock.

What did you learn watching the film? Tell us in the comments below.

For the Love of Spock is now available on Blu-ray and DVD through Amazon and is currently streaming on Netflix in the United States.