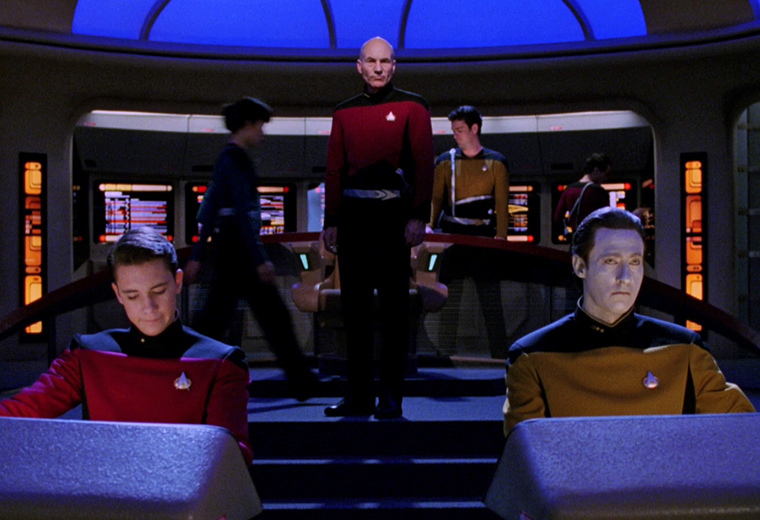 And with those exciting words, spoken by the official Starfleet computer herself – voice acted by legendary actress Majel Barrett Roddenberry – you were transported aboard Captain Jean-Luc Picard’s Galaxy Class Starship, Enterprise 1701-D. Playing around in the exploratory space fleet of the fabled United Federation of Planets had finally come to be within my grasp! Engage, indeed!

Windows 95 had just launched and was all the rage, and in the fall of 1995, I purchased a top of the line desktop PC. That bad boy was so big and heavy, I barely got it home without a need for using a hand truck to haul it into my apt. It had all the bells and whistles, complete with CD-ROM drive. CD-ROM’s were then the ‘state-of-the art’ in terms of multi-media powered gadgets, and my sexy new Compaq Presario boasted all the cyber guts and glory to pretty much run anything I needed or wanted. For over 3K, I figured it had better do all I needed and more.

I’d read the reviews and heard how terrific the Star Trek: The Next Generation Technical Manual published by Simon & Schuster was for Trekkers. After a long day of setting up my new computer, it was late into the evening when I finally installed and ran the CD-ROM which promised I could actually board and freely explore the Enterprise.

Boy, did that take awhile.

See, back in the early dawn of the primitive PC day, it could take hours to set up new PC’s and install programs – you know, what we call apps today. Anyway, when that first splash screen hit my monitor – complete with the United Federation of Planets logo – it gave me all the geeky energy I needed to wake right up again. 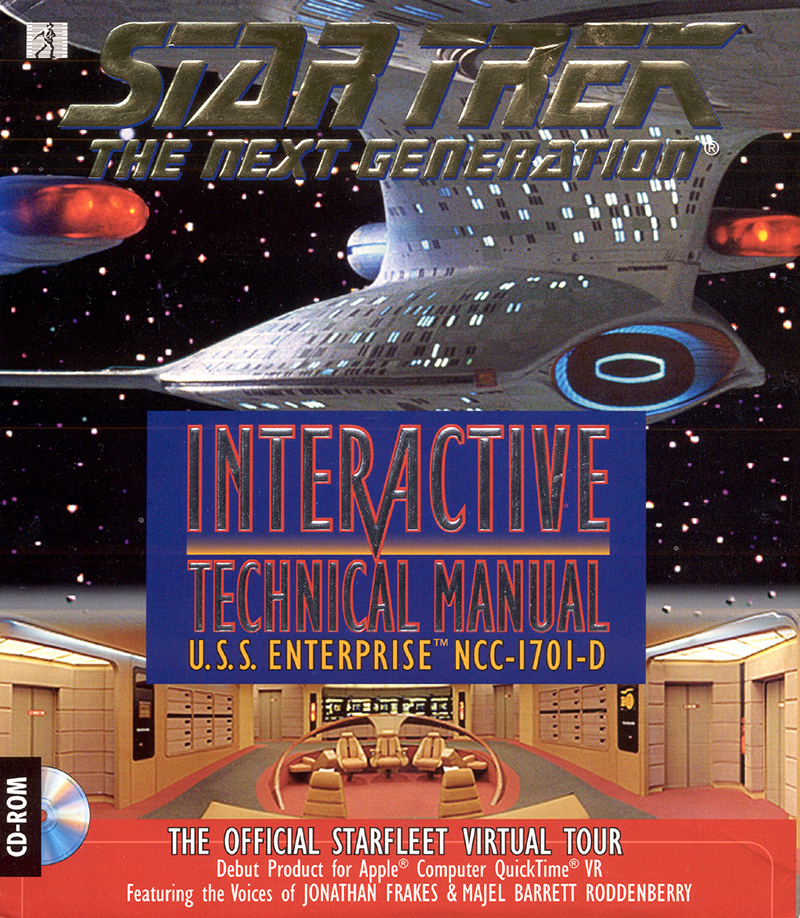 The computer gives you a choice of taking a guided tour – conducted through video clips and voice over by Commander William T. Riker, TNG actor Jonathan Frakes. I first selected the guided tour given admirably by Picard’s first officer, and sat in rapt awe for its near 11-minute presentation. As Cmdr. Riker’s familiar voice colorfully described locations I’d seen so often on TNG, the Enterprise’s ever present tech gave off those familiar beeps, sound FX which so enhanced the Gene Roddenberry created television show. That fun soundscape became even more noticeably powerful once I went exploring.

Exploring. In real time. It’s the true thrill of using this landmark app. One can enjoy the narrated tour, and whenever the mood takes hold, interrupt Riker’s charming droning lecture and take a waltz to practically anywhere aboard the majestic starship. Want to see what Data’s quarters look like? How about Troi and Worf’s cozy rooms? How about examining Picard’s lion fish, Livingston? You can.

Speaking of the need to go waltz off somewhere and do something important, I desperately had to take a leak. Computer, direct me to the nearest restroom! Working… Working… Hey, Computer! Help a guy out here! I hung out with Guinan serving me up green stuff in Ten Forward all night!

Crap, I’ll just have to go in one of the holodecks! 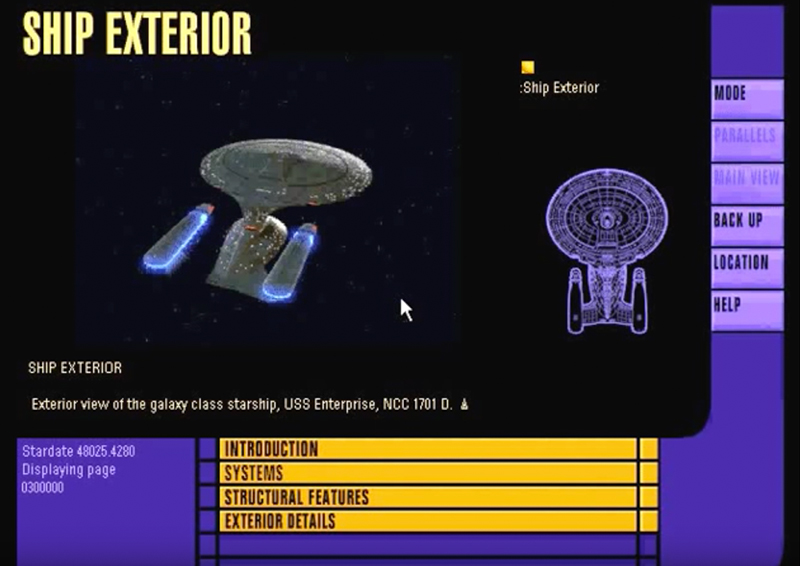 The apparent lack of crew bathrooms – or a HEAD – in the otherwise believable Star Trek universe, especially in TNG’s early seasons, is something of a running joke for fans. However, in the Interactive Tech Manual, one is finally shown – at least the door to one is labelled and can be found on the Bridge.

The creators of the Tech Manual utilized Apple’s QTVR or Quicktime Virtual Reality – it was a nifty name for enabling one to examine objects in all three dimensions. So, if you were snooping around in Dr. Beverly Crusher’s Sickbay and picked up a tricorder, you not only could zoom in on the nifty device, but examine it from any angle you desired. It was the next best thing to actually holding one in your hands.

Tricorders. How I wanted one. When I finally scored a Playmates replica version, I was overjoyed! My sister even bought me another one – a Medical Tricorder replica one Christmas. Before then, I could kinda own one virtually with the Tech Manual.

Years later, Simon & Schuster published Star Trek: Captain’s Chair – a revamped and highly expanded version of the TNG Tech Manual where ALL major Trek starships – up to that time – were included. You can visit Kirk’s 1701 – no bloody A, B, C or D – (courtesy of CGI recreation) and go right up to and play around in the then most recent TNG feature film incarnation, Picard’s Enterprise E – introduced in the Borg on a rampage thriller, 1996’s Star Trek: First Contact.

On its 23rd anniversary year of release, and for TNG’s 30th, it’d be such incredible, nostalgic fun to see Star Trek: The Next Generation Interactive Tech Manual re-released in a big way – perhaps as an Android and iOS app? How does a full tech upgrade or revamp sound? Imagine the possibilities if it was translated to run on Virtual Reality devices and headsets. You could actually walk around on those Starships as you move around wearing your VR device. Till then, if you can’t run the vintage program itself, you can experience much of the pioneering fun by perusing YouTube and enjoying the many video uploads of loyal fans.

Take a tour of the Enterprise-D, courtesy of the TNG Interactive Technical Manual, below.