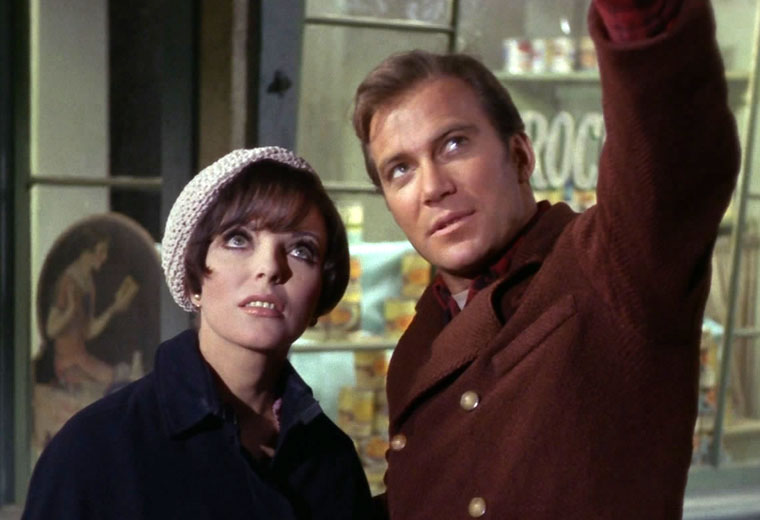 As a kid watching Star Trek on New York’s WPIX in my home state of New Jersey, I can recall being really excited when I’d catch repeats of the various episodes. Mirror, Mirror was one of my favorites, as was the pure comic delight of The Trouble With Tribbles. Among all the romance laden tales of Gene Roddenberry’s original Trek is ‘City On The Edge of Forever’. The complex tale of time travel and 20th century America blended with the doomed romance of Captain Kirk and Edith Keeler numbers among my most cherished of Star Trek tales. Here’s an excerpt and my tribute to that special episode – found in my book, ‘Star Trek Sex: Analyzing The Most Sexually Charged Episodes of The Original Series.’ 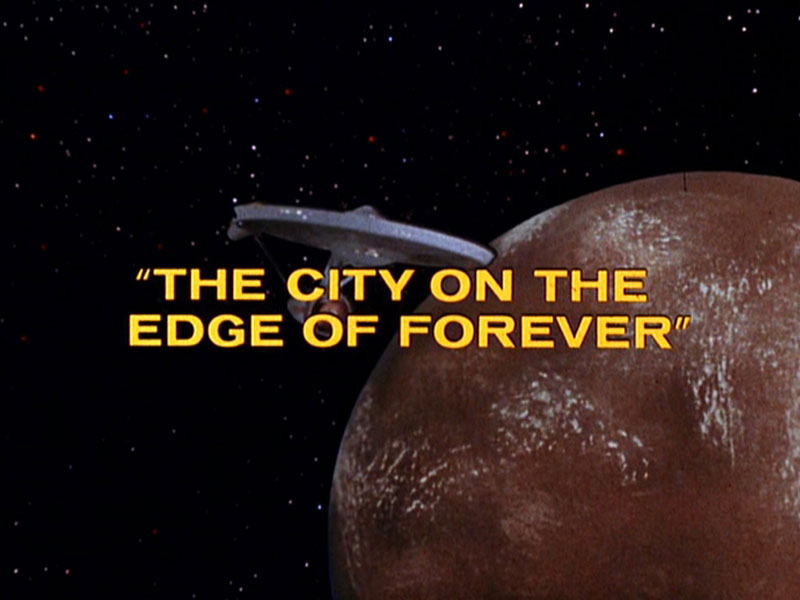 The title card for “The City on the Edge of Forever” | Photo: CBS Home Entertainment

While orbiting a planet which is home to a living time machine called The Guardian of Forever, the Enterprise is struck by a series of energy ribbons—or time energy ripples—emanating from the temporal entity. After the highly dynamic spatial and temporal vibrations cause Dr. McCoy to accidentally inject himself with a highly potent stimulant, he goes temporarily insane, and uses the Guardian to time travel back into Earth’s past. Now, Kirk and Spock must travel through time and chase after Bones to prevent him from saving a life—before all of their known reality is changed for all of eternity. 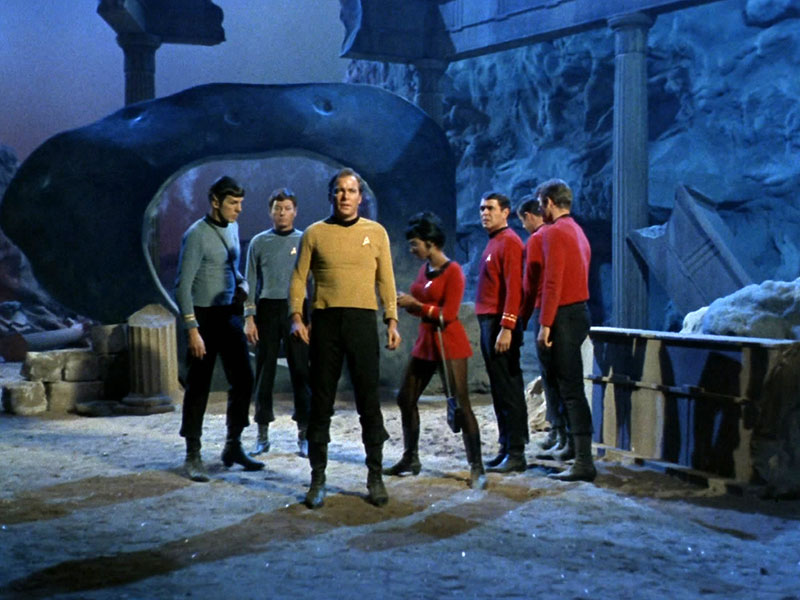 Kirk and the crew of the Enterprise | Photo: CBS Home Entertainment

Joan Collins is an actress with two iconic roles to her Hollywood credit. As Alexis Carrington on the nighttime soap opera Dynasty, Collins became known to all of the TV world as a ruthless, yet endlessly fascinating wealthy woman of immense power and influence. It is this character who engaged in the tortuous, yet entertaining manipulation of everyone around her. She was also one half of the hair pulling and wrestling dame duo, who took the girl fight concept to a whole new level. Opposite her favorite sparring partner, Linda Evans (The Big Valley), as Crystal Carrington, Collins spent many years sketching out a vibrant and indelible Hollywood mark on American pop culture.

As the well meaning—but dangerous to society’s freedom and future—Edith Keeler, Collins spent about a week creating the unforgettable social worker for whom Captain Kirk falls madly in love with, but must abandon for a greater good. That in some ways Keeler is now the better known and remembered character, at least in the countries which embrace Star Trek more than Dynasty, is a credit to both Trek’s lasting power and Joan Collins’ talent as an actress.

There is no other original series episode—nor in any of the spinoff shows—which so exemplifies the classical, romantic notion of a love which was meant to be, or even a love at first sight. Kirk and Spock don’t have much time to locate McCoy and properly solve the mystery of why their civilization—back to the future—has been fully eroded or outright erased forever. Sure, it may arguably be seen as a convenient plot point to have Kirk swoon over Edith Keeler so relatively quickly, but William Shatner rises to the occasion of writer Harlan Ellison’s famous script, and the pairing of the two actors makes for a truly unforgettable adventure. 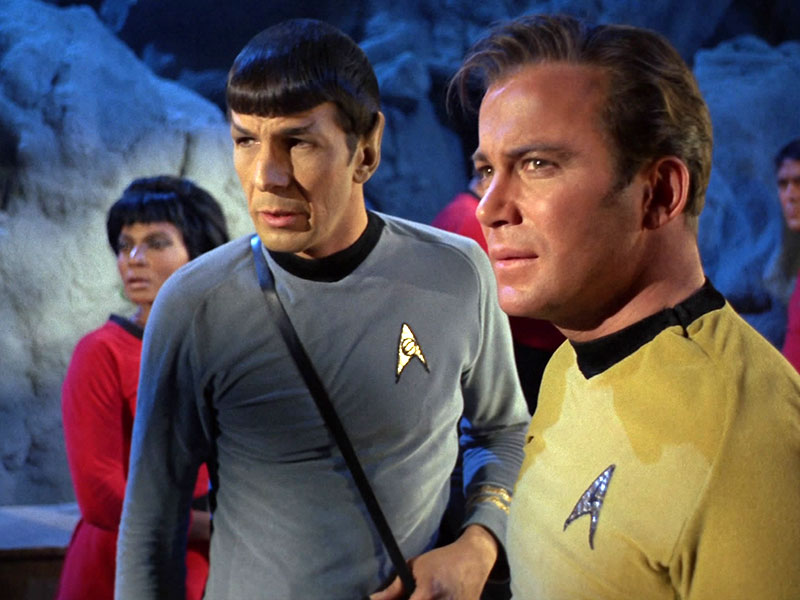 Maybe it’s because of what’s riding on the outcome; the mountainous high stakes—all of the Federation’s world building work, its citizens (not to mention countless other alien societies’ influential connections and permutations) and very existence hangs in the balance, if Ms. Keeler is allowed to live and continue her mission of peace encouraging work. The suggested alternate timeline or historical timeline of the Axis Powers and Nazi regime snuffing out the Allies, Americans and Europeans is also compelling.

But, ultimately, it seems to go back to a simple and elegant love story. James T. Kirk falls in love with Edith Keeler—their titles and motivations don’t really matter much in the end. A man and a woman come together, but are forbidden to fully consummate their blossoming love because of what it will mean to the entire world. 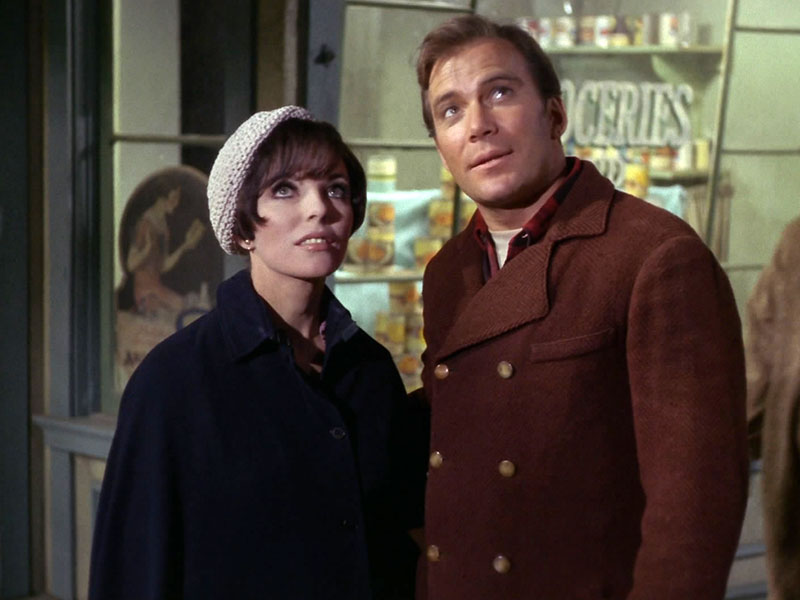 And then we have the plight of Bones—Dr. McCoy.

Dr. Leonard ‘Bones’ McCoy, the Southern gentleman and ship’s physician, has had his share of romantic liaisons, but next to his commanding officer, he may appear almost a celibate monk. In this outing, because of his accidental overdose of the super stimulant McCoy was administering to Sulu, Bones is in no shape for romance—good, bad or otherwise. However, by the time he gets to Edith Keeler’s charity soup kitchen, McCoy is healing and on the mend, and he’s definitely looking at the committed social worker in a warm light. It nearly becomes a love triangle, but Bones never has time to woo the pretty social worker. 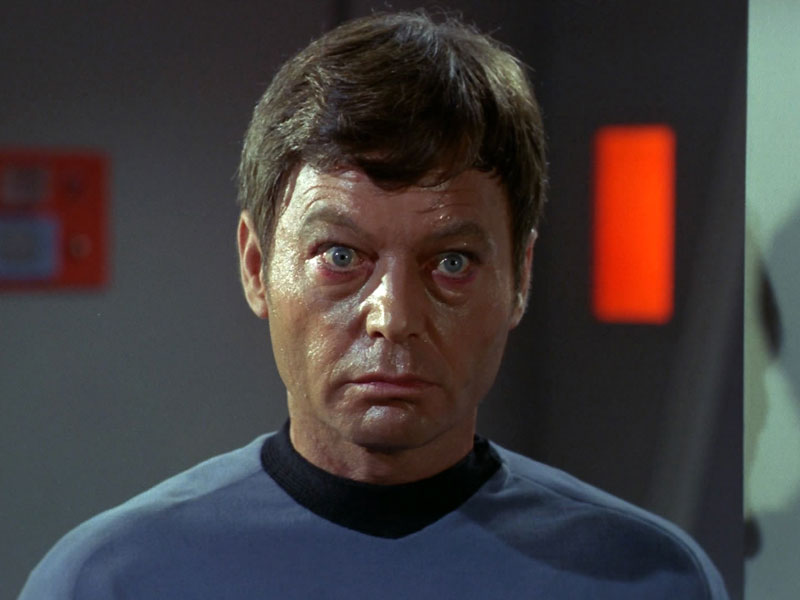 In the penultimate scene, as Kirk tenderly restrains his good friend McCoy from saving his new found savior from her death, it speaks to us as one of the most difficult and moving moments in all of the program’s many installments. As Spock solemnly intones “He knows, Doctor. He knows,” Kirk realizes he’s allowed the woman he loves to expire before his grieving eyes. For McCoy, there may have been real potential denied. There could have been a seed of hope which he could have begun to nurture similar romantic feelings for the magnetic Edith Keeler. 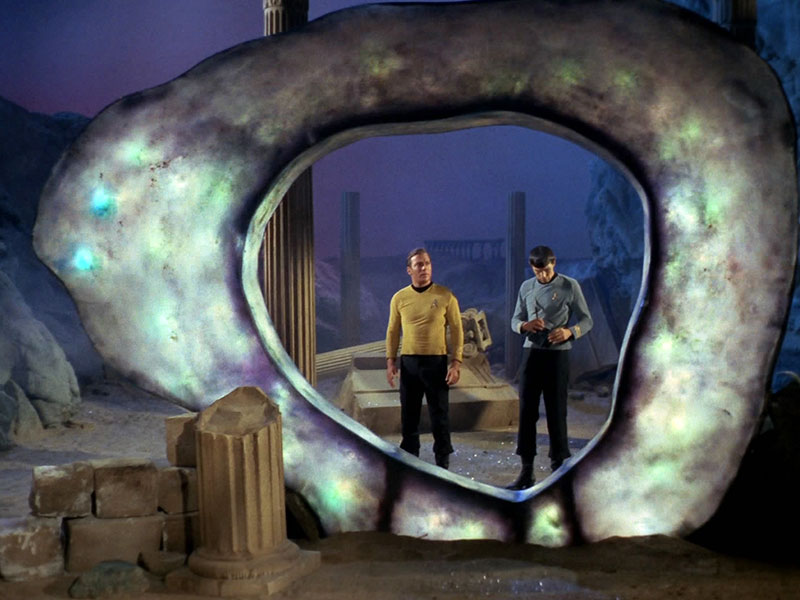 Kirk and Spock at the Guardian of Forever | Photo: CBS Home Entertainment

Finally, in her necessary death, both men are forever denied that winsome chance.

It isn’t any wonder when Kirk says “Let’s get the hell out of here,” as he and his dazed crewmen return to their space faring home—the restored Starship Enterprise.