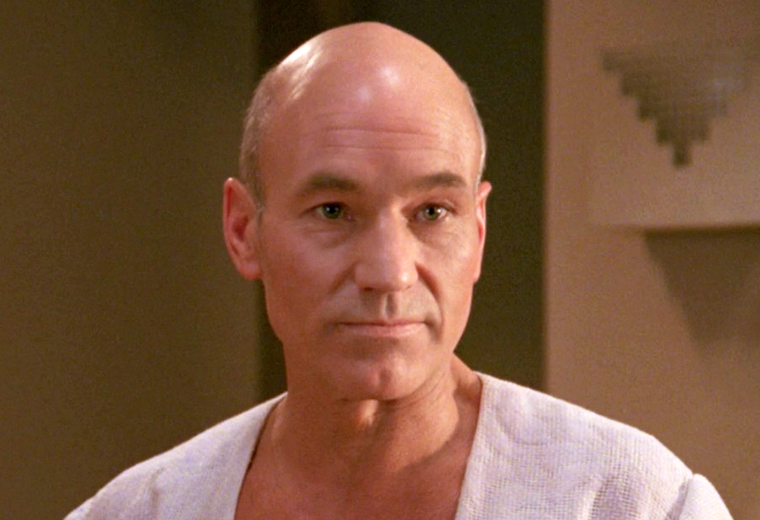 The Horga’hn is the Risian symbol of sexuality. To own one is to call forth its powers. To display it is to announce you’re seeking jamaharon.

“I don’t even know what it means.” – Captain Picard & a Risian

If a friend told you to do something which brought sexual advances from a host of attractive partners, would you be thankful? What if you were unaware of the ultimate consequences of the act because your friend kept it from you as a little practical joke? Reward or punish them? It would depend on the outcome – on a hopefully happy ending.

For Captain Picard’s experience in the rollicking Next Generation episode, “Captain’s Holiday”, the ending to his unique vacation brims with all manner of sensory input. Action, adventure, intrigue and romance mix in equal, entertaining measures with far future, time tripping aliens to punctuate a memorable outing and provide our Star Trek universe something akin to vacationing at a free brothel. 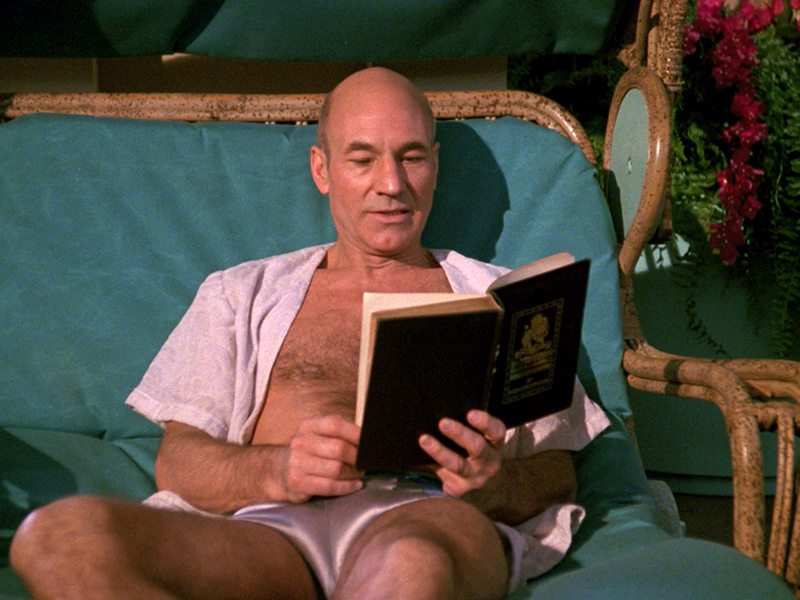 Planet Risa Computer: Welcome to Risa. All that is ours is yours.

Indeed. In other words, the people of Risa are clearly saying, ‘Come to our world and play in a free wheeling sexually liberated playpen. Don’t worry about the cost, because we’ll give ourselves freely. The only tab may be for food and booze – the sex is included.’ 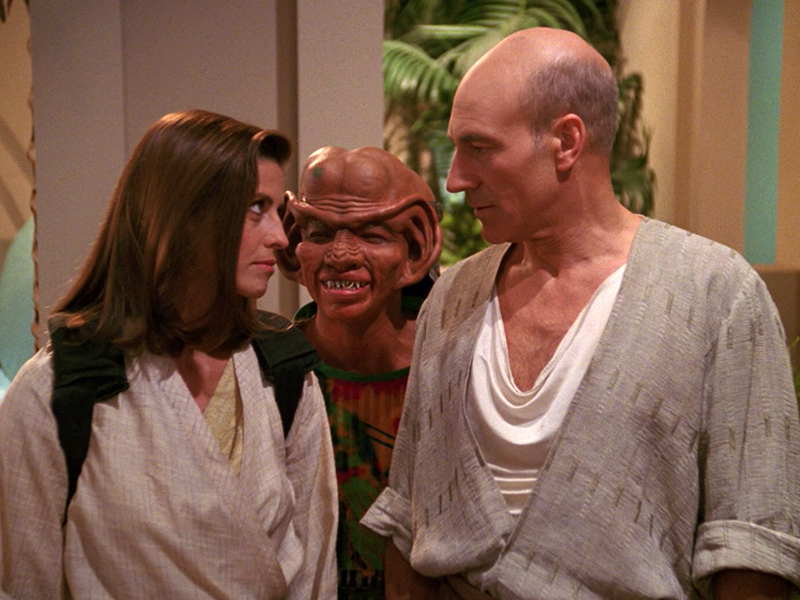 Free sex on a pleasure planet. Who could refuse?

We’ve seen the classic, original series episode, “Shore Leave”, where Captain Kirk and crew land on a different kind of pleasure planet. Instead of being greeted by potential playmates who don’t charge for professional sexual services, here we have any fantasy come to vibrant life for whatever desire imaginable. Living inside an iconic fairy tale such as “Alice In Wonderland”, or encountering an arch enemy from your formative youth and getting a chance to finally best him, are just a few of the fun romps which completely engage the original Enterprise crew.

On Risa, the statue of the Horga’hn isn’t going to let you follow around a hyperactive white rabbit. It will simply get you laid. It’s this no nonsense approach to scoring which keeps Risa in the prime lane of the United Federation of Planet’s tourist spots. Risa is no doubt nicknamed ‘Booty Call’ world by the more physically possessed creatures around the galaxy. 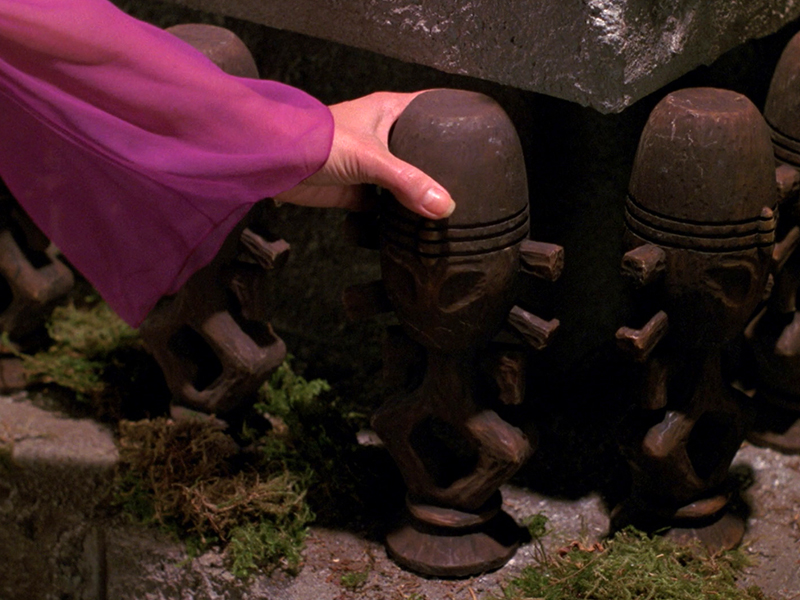 Speaking of other creatures, one must wonder why only the females on Risa approached Picard to whisk him off kicking and screaming to a phantasmagoric realm of sexual ecstasy. After all, it’s a sexually mature and apparently socially advanced culture. Where are all the male Risians vying for the physical charms of our sexy, bald Starfleet hero? I’m sure Patrick Stewart’s flamboyant character in the feature film, “Jeffrey” would have wholeheartedly approved.

According to the TNG documentary, Chaos On The Bridge, Gene Roddenberry wanted to see same sex extras hooking up, getting hot and heavy. To avoid the predictable network censorship protests, producer Rick Berman pointed out the hiring of so many extras to achieve such a colorful background would bust the episode’s budget. Now, in our more enlightened era, perhaps the gay character (Anthony Rapp) in the upcoming, Star Trek: Discovery will be seen availing himself of male companionship on Risa.

After writing my book, Star Trek Sex: Analyzing The Most Sexually Charged Episodes Of The Original Series, a few of the interviews I’ve granted were full of questions such as, “Are you obsessed with sex?” and “Do you find powerful sexual themes in other things besides Star Trek?” I must say that though I can answer in the gentle negative to both, a healthy exploration of our sexual identities seems truly lacking in much of our entertainment and pop culture. Obsessed with sex? How’s about having a healthy interest in sex.

It’s said we who live in the Western world live in a hypersexualized society. Sexual situations appear to be everywhere we look. And it’s true – sex is definitely not rare in pop culture. I don’t mean the inclusion, mention or even the depiction of sex in TV or movies – obviously it’s commonplace. Let’s talk the substance and quality of sexuality, something far more rare. It’s about seeing an adult and healthy engagement of people involved in a sexually gratifying way. The natives on Risa don’t obsess over sex. They don’t fear it. They don’t make it into a forbidden taboo. Their healthy, progressive sexual lives fit in naturally along with their everyday routine and societal norm. 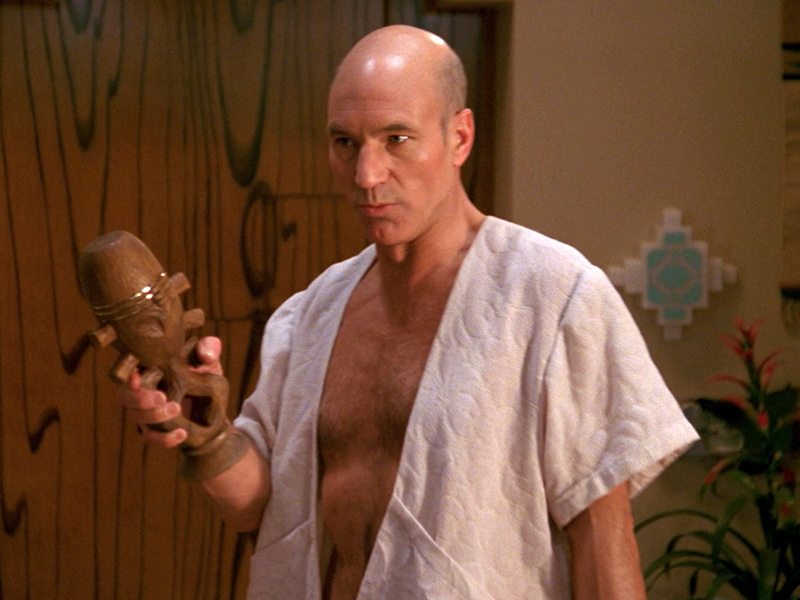 Is Risa merely a raunchy sex club planet – obsessively preoccupied with fulfilling its visitors most bizarre erotic fetishes? A cosmic Best Little Whorehouse? Are Risians an ultimate example of having “friends with benefits”? Or is Risa far more like Disney’s Pleasure Island, where adult themes mix and match with the sociologically diverse clientele? One thing’s for certain – despite the fun adventure Picard had with lovely Vash and those deceptive Vorgons, fans remember the tale most strongly for a place where all kinds of healthy sexual fun can be had – all for the small price of buying a little, ugly statue.