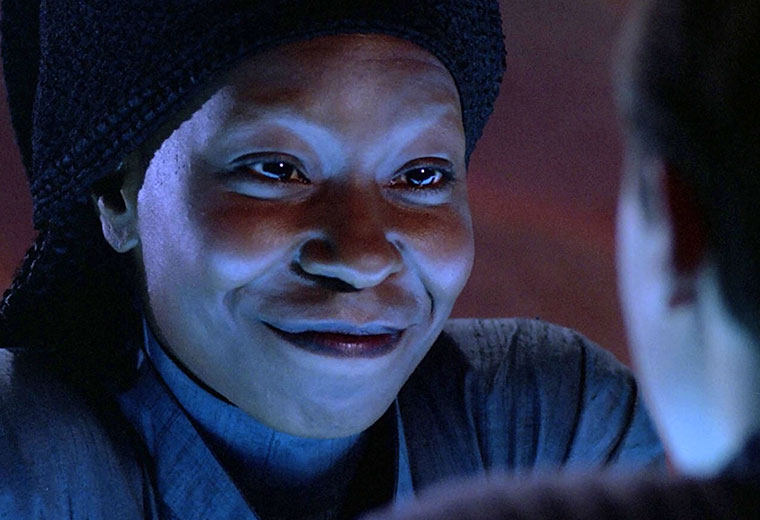 “Ten Forward is the hub of the ship’s social activity. Everyone on board comes here.”

Jazzed to graduate from Starfleet Academy and finally get posted to the final frontier? If you’re always in a mood for drive-thru to score a Big Mac or Chicken McNuggets, working out in deep space may ultimately disappoint you as a fast food lovin foodie. No worries, Starfleet tech’s got you covered. Grabbing a meal, snack or wetting one’s whistle is incredibly easy to do on a 24th century starship such as Enterprise.

Food and drink replicators can be found all over USS Enterprise 1701-D. This ever reliable magical technology beams out all kinds of exotic dishes. Troi loves indulging in her chocolate decadence. Worf whips up his Klingon squirming gagh, and Captain Jean-Luc Picard replicates, among other things, his favorite drink: Tea. Earl Grey. Hot.

Yeah, I know, you’re thinking: Soft drinks are OK, but what about the booze?

Starfleet Captains don’t have it easy. Picard may be going through really stressful negotiations with those cobra heads – the thuggish Cardassians. What if Lwaxana Troi bursts on the scene to complicate his already complex life? These job hazards play upon a dedicated space faring professional. He’ll need to spike things up by sneaking a little scotch or whiskey into his signature tea. Saurian Brandy? Romulan Ale? Don’t mess around with replicated booze! It’s not the real thing! Take a walk down to Ten Forward, Guinan will hook you up. 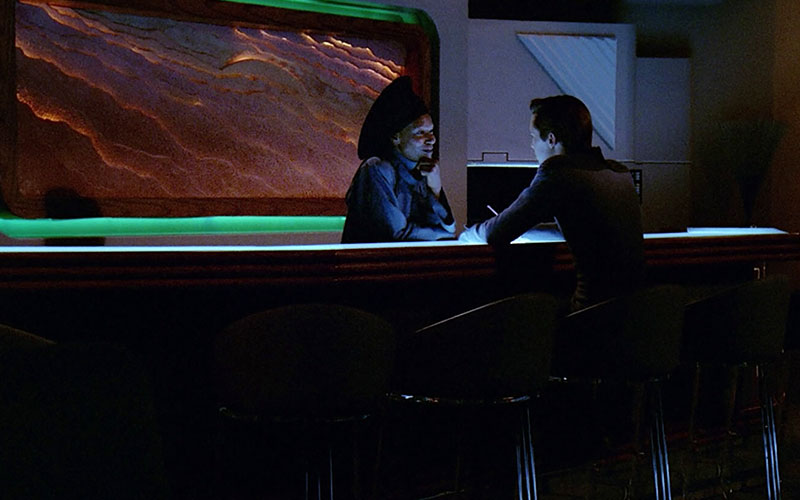 In “Relics”, Scotty found out that although 24th century Starships have crews who regularly drink synthetic alcohol, you can still find the good, authentic stuff – if you know a source.

‘I believe Guinan does keep a limited supply of non synthohol products. Perhaps one of them would be to your liking.’ – Data

Star Trek: The Next Generation‘s sophomore season was something of a deep sigh of relief or even heady celebration for cast, crew and its fans. TNG had not only survived, but according to its stellar syndicated ratings, more than prospered. Riker got a beard. Worf got promoted to Security Chief – sadly, because of Lt. Tasha Yar’s brutal death. Q introduced us to a relentless Borg. All this excitement demanded a bar to soak up spirits and a lounge to, well, lounge around and play games in, such as the frenetic, holographic game, Strategema.

In a bar where hostess Guinan knows everybody, you best be aware of the socializing which goes down. Enterprise isn’t exactly a sedate, boring place. If you find yourself in Ten Forward, and you’re watching a certain golden faced android go toe to toe – finger to finger – with a chubby, ticked off alien, you may hear, “This is not a rematch! You have made a mockery of me!” 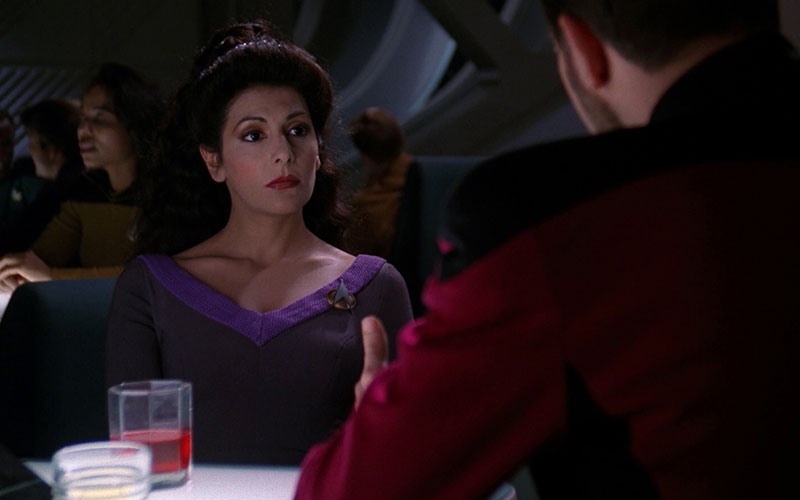 Ol Yellow Eyes android sums it up by proclaiming, “I busted him up.”

Data’s memorable strategy game match – or strategema – from 2nd season episode, “Peak Performance”, describes the real soul of the addition of Ten Forward to Enterprise. Here’s a place where one can relax in with close friends and valued colleagues, or perhaps entertain a visiting friend, family member or bring your date for an after dinner drink.

How’s the service? Is it a self serving checkout line, or like those robotic, drone based Amazon stores? Don’t initiate Red Alert just yet. Ten Forward is run by a humanoid. She of the many unusual hats presides here.

An establishment is only as fun as the tone found therein, and that essential vibe is usually set and cultivated by management. With Whoopi Goldberg as Guinan, our enigmatic barkeep, we’re always assured something more than diverting can be found in her soothing domain. Goldberg is fond of saying her character was the last, official one which Gene Roddenberry created himself. The Academy Award winner is a Trekkie herself, and when she asked buddy Levar Burton (Geordi LaForge) to get on the show, producers were more than pleased to accommodate her.

In later spin-off shows, we could belly up to Quark’s Bar on the glorious Promenade of station Deep Space Nine, and we looked on in awe and mystery (or maybe real fear) as galley cook and all around inspirational cheerleader Neelix mixed together any manner of edibles and potables on a Federation starship lost in space, Voyager. However, Ten Forward remains a landmark in Trek lore.

Guinan’s place is arguably coolest in terms of its understated, future decor and muted lighting; those thick, wood doors alone give it a near rustic look of Texas Americana. Of course, it’s not simply the physical layout or cosmetic appearance which properly defines Enterprise’s crew lounge. 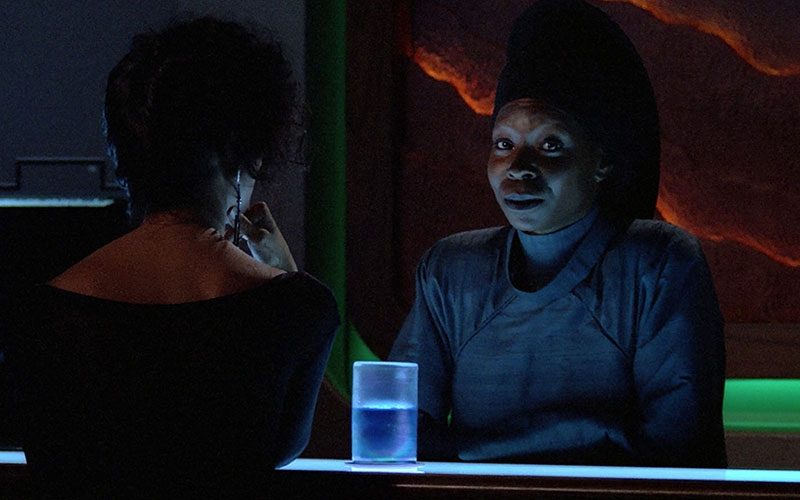 Ten Forward’s manager stands as among the most interesting and popular of all Trek’s galaxy of iconic characters. Limiting Guinan’s appearances to around 7 a season made us want more. Her electric skirmishes with Q and the fact that her race was nearly fully decimated by the rampaging Borg, lent her a cosmic intrigue which is pretty hard to beat.

Picard and his capable crew’s lounge isn’t simply a watering hole – it’s not merely a place to get your grub on because of limited replicator credits. This cheery joint is a meeting and social place to wind down and recharge. One of the funniest comedians in modern American history and an Oscar winner hosts as your barkeep. Just as in that other classic CBS/Paramount show, Cheers, Star Trek: The Next Generation‘s Ten Forward beckons us Federation citizens to take a load off, relax and stay awhile. You’re among friends. It’s where Guinan and everybody else knows your name, your drink and your species.