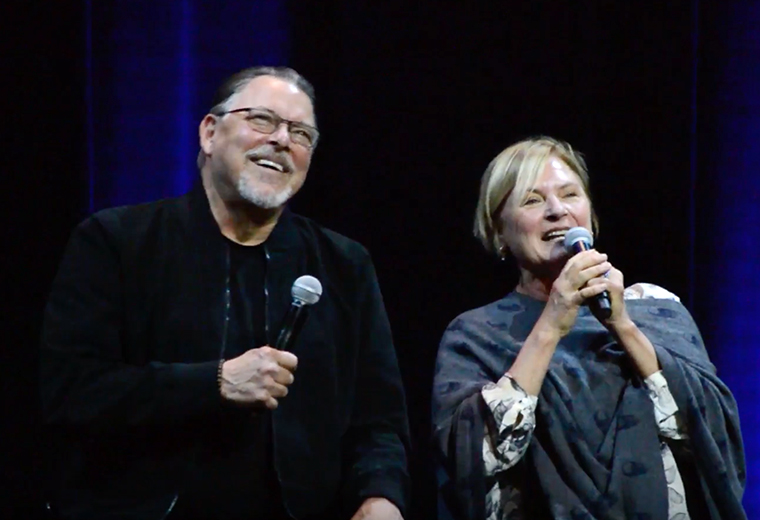 Most of the cast of Star Trek: The Next Generation attended a reunion panel, hosted by William Shatner, at the Silicon Valley Comic Con last week in celebration of the show’s 30th anniversary this year. The panel included Jonathan Frakes (Will Riker), Brent Spiner (Data), Marina Sirtis (Deanna Troi), Gates McFadden (Beverly Crusher), Denise Crosby (Tasha Yar), and Robert O’Reilly (Gowron in four episodes of TNG and seven of DS9). They talked about their acting process, Star Trek’s relevance in 2017, and Star Trek: Discovery, among other things.

On whether they would want to appear in Discovery, none of them were very committal (except for Sirtis, who said she would have to be paid “lot of money to get into that space suit again”). The cast said they were looking forward to the show, though.

“I bet it’s going to be great,” said Spiner. “It’s good for everyone if it’s good, because [the franchise] goes on and on. We are part of this giant epic that is the great American epic that is Star Trek.”

The cast also touched on what role Star Trek plays in the political climate of 2017, and what people can learn from the show.

Sirtis offered a more forceful lesson when she said, “We need to stop spending money on ridiculous shit and start looking out of our own people.”

“I think we have to embrace science and embrace real facts, not alternative facts,” offered McFadden. “We have to make this place [Earth] sacred. We need to treat it with the utmost grace and respect.”

On the same topic, Spiner generated a huge applause from the crowd when he mentioned he saw a sign from the March for Science in Washington, D.C. on April 22 that read, “Data, not Lore.” 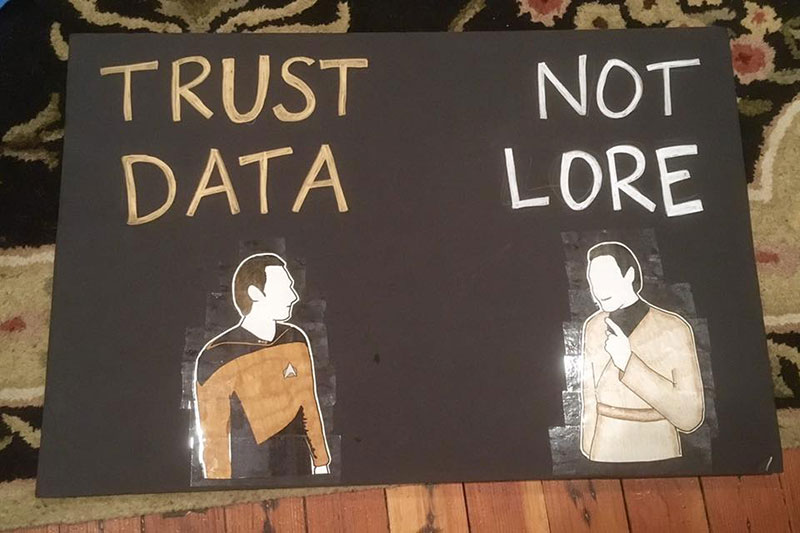 The panel fielded a question about their acting process, and whether they prefer playing a role that is like them as a person, or if they like to create wholly new characters.

“I’m most interested in not being myself,” said Crosby. “How far away from myself can I get? I rather create somebody entirely different. It’s not easy to do.”

A fan-favorite segment was when the actors were telling embarrassing stories about their castmates, including a story by McFadden about her failed prank on Patrick Stewart during the filming of “The Best of Both Worlds.”

“I got the props and set people to help me redecorate the bridge for when Patrick came back after filming scenes [for ‘The Best of Both Worlds’],” related McFadden. “I had pictures of Wesley, a big champagne bottle, all of these guys with no shirts, and I was in curlers and a bath robe. Patrick walks in, and he’s nearsighted, and he doesn’t notice anything wrong.”

One fan asked the panel if they had any personal messages for Star Trek fans, and some of the panel related heartfelt sentiments.

“Sometimes people in show business forget why we have lovely lives,” said Sirtis. “We owe it to the people who turned on their TV sets for seven years and paid money to go see [the movies]. We owe everything to you. As a group, you have given us our houses and car. God bless you all. I don’t know if we’ll never be able to pay you back.”

Frakes related a touching story of when he and other Star Trek actors were at a convention, and a man with two missing legs rose up in his wheelchair and applauded for them. “It was so moving and unforgettable,” said Frakes. “It’s the microcosm of the power of the show and the blessing we all share.”

One of the last questions was about the state of television today, as opposed to when TNG was on the air. Frakes asserted that television now “is better than ever.” Spiner agreed, saying that the number of great shows on is “unprecedented. Now is the platinum age of television,” and that binging is the best way to watch TNG because of the “sheer number of episodes.”

You can watch the entire panel below.