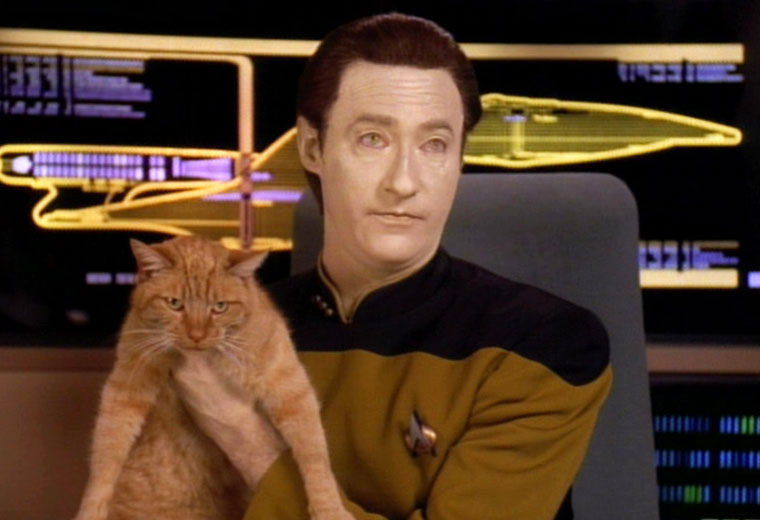 O Spot, the complex levels of behavior you display
Connote a fairly well-developed cognitive array.
And though you are not sentient, Spot, and do not comprehend, I nonetheless consider you a true and valued friend.
– Data’s ‘Ode To Spot’

It’s no wonder Data joyously embraced the sleuthing spirit, then took on the very persona of the iconic detective, Sherlock Holmes. Actor Brent Spiner played the synthetic humanoid on TNG as a genuine investigator, constantly searching for answers to the infinitely complex human equation. It’s a brilliant, multi-faceted performance which anchors a landmark, sci-fi TV show.

Who knew an artificial lifeform, even as complex as Dr. Soong’s creation, could summon up such raw, biting emotion when writing poetry? OK, maybe it’s slightly lacking in the true feels department, but Data’s mechanical heart’s in the right place. His ‘humanity’ is especially evident when it comes to his beloved pet. Aren’t we all the same with our own animals? 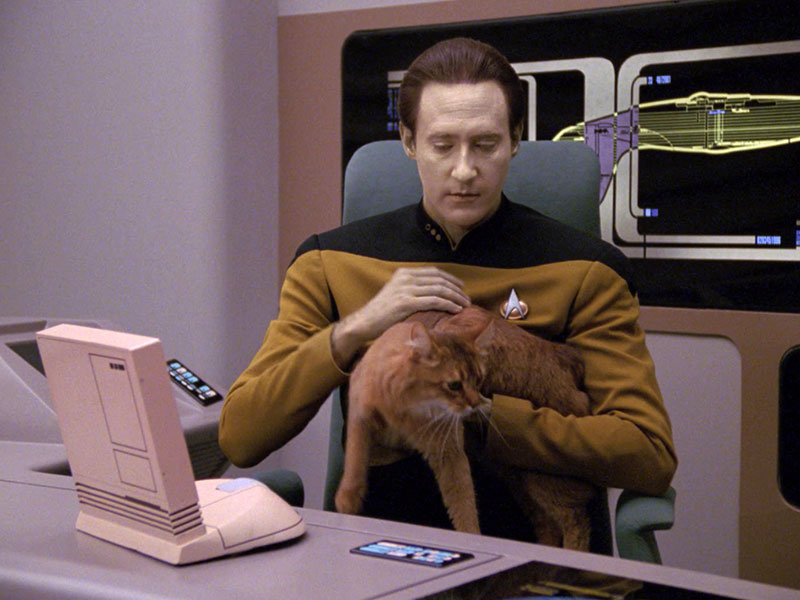 In The Next Generation episode, ‘Schisms’, we see an Enterprise officer wax ever so fondly over his strong attachment to a furry pal. An android is so overly enamored of a four footed friend he composes a tribute – or ode – to his pet cat, Spot. That Commander Riker is too damn tired to appreciate Data’s poetry recital is really besides the point, right? Something tells me Riker probably would’ve liked Data’s performance even less had he not been so exhausted – a victim of those nasty sleep stealing aliens kidnapping him during the night. Sleepy Riker wasn’t all that poetry picky. It worked out for the best.

While never indispensable show elements nor formal crew members, pets, animals and assorted cosmic critters shine brilliantly as fun focus in Trek’s spotlight since Gene Roddenberry originally launched his Starship of the imagination. If you think furry, fuzzy and friendly combined with Star Trek, you immediately think of those purring fuzzballs, Tribbles. Those born pregnant, chronically purring (unless a Klingon’s nearby) fuzzballs morphed from cute, novelty beasties to the pets from hell. 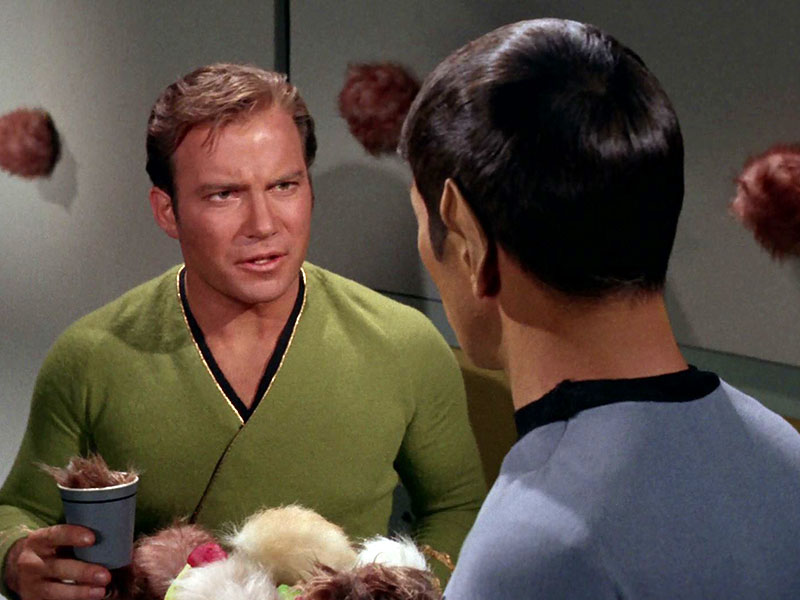 Housing them is a risky endeavor. Despite an adorable appearance and, initially, their charming behavior, Tribbles are, in a word, dangerous. They can’t be kept for long periods – because the nasty habit these voracious critters have of eating everything in sight and procreating so efficiently they completely overrun and overflow any vessel foolish enough to hold them. Sound suspiciously like a few close relatives?

Keeping Tribbles as pets isn’t a long term option. So, what’s a legendary sci-fi franchise to do? It wasn’t until Star Trek: The Next Generation when the Trekverse entertained the keeping of real animals as pets on board the Enterprise. This animal menagerie parade started off with the pet basics: an aquarium in Picard’s Ready Room.

Picard keeps a lionfish in his cozy Bridge office. Nicknamed Livingston, after show producer and director David Livingston, the exotic creature became a familiar TNG set dressing. Despite his cosmetic appeal and lively, organic addition to things, it’s said Patrick Stewart didn’t like his character keeping a living thing as a pet. Perhaps this quaint reminder of an apparent bygone era – where humanity kept living creatures in such cramped captivity – could have ultimately morphed into a holographic fish. “Captain, your fish – um, it passed away. No worries. We created this holographic replica for you.” Ethical problem solved neatly.

When Data started taking responsibility for his kitty, Spot, fans realized how cozy a warp capable ship could become with addition of familiar, earthy house pets. Spot experienced more than a few adventures – including being morphed into an iguana in the mind bending, devolution romp, “Genesis” – directed by none other than Dr. Beverly Crusher herself – Gates McFadden.

Will pet food sales still be big business a few centuries from now? Replication may do away with many food outlets. Pets may be eating from the same tech food printer as we will. And it seems fitting, since many finicky pets often prefer our table food – even gourmet dishes. Fancy a little aromatic cheese? Captain Archer’s pet dog, Porthos, was a big cheese eater, gourmet or otherwise. The beagle who fancied cheese kept his Captain company and viewers intrigued on just what trouble he could get himself into during launch of the first Starship named Enterprise. 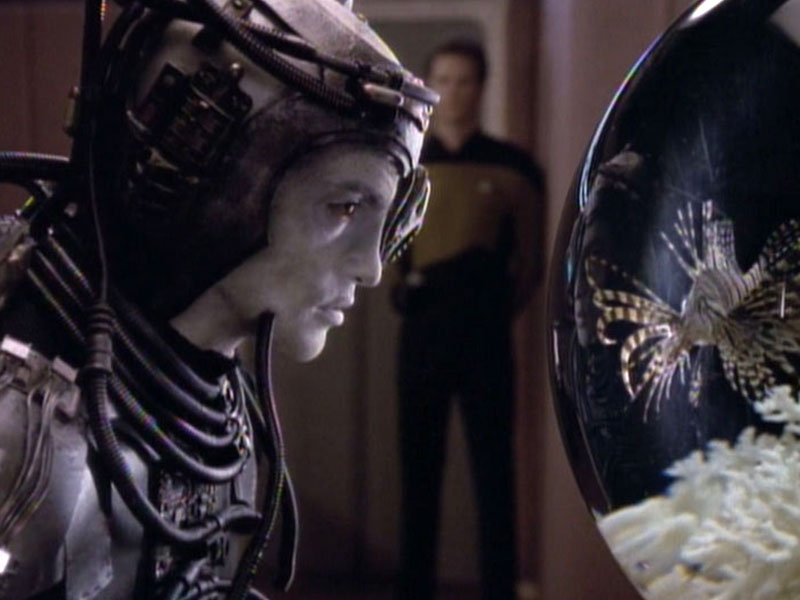 The recent animated hit movie, The Secret Life Of Pets tells the wacky tales of the misadventures of everyday house pets – while the owners aren’t present or looking. What a thrilling romp we’d have had if some ‘space anomaly’ had rendered our intrepid Enterprise crew inert, then supercharged the intelligence of Enterprise’s pets. Perhaps Patrick Stewart, Jonathan Frakes, Marina Sirtis and the rest of the crew could have provided bouncy voice acting to infuse the animals with a familiar vocal cadence.

What pets – if any at all – will we see the crew of Discovery playing with and keeping on board? Star Trek, if anything else, is all about seeking out and discovering wacky, new lifeforms. Maybe we’ll see unimaginably exotic creatures. Gigantic Tribbles? Mice sized Horta? Perhaps we’ll be treated to ja few house cats, dogs or even fish. Isn’t the quest for that perfect pet a mission worthy of a mighty Starship? One thing’s clear – if there’s any trouble brewing with those pets, the Discovery crew can take a page out of Scotty’s strategy book and simply beam them far and away – ‘where they’ll be no tribble at all.’