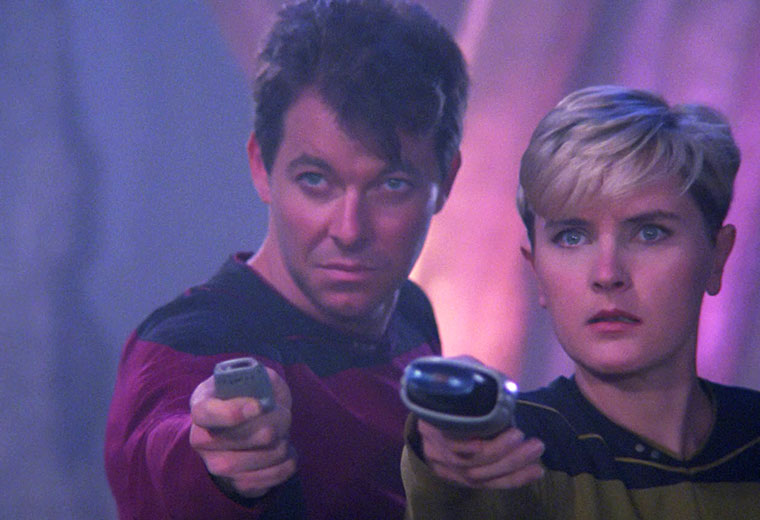 Set phasers to stun. Fire phasers! Lock phasers on target & await my command. Phaser on overload! The best diplomat is a fully-loaded phaser bank. As you know, Commander Chekov, no one can fire an unauthorized phaser aboard a Starship. Maximum setting. If you’d fired this, you’d have vaporized me. It’s my first ray gun.

Pick your favorite Star Trek phaser reference. Fire up those holographic memory banks, then set your neural phasers firmly to fun! It’s hard to remember now, because the phaser plays such a vital part in the Gene Roddenberry crafted universe, but there was time when the phaser didn’t even exist. 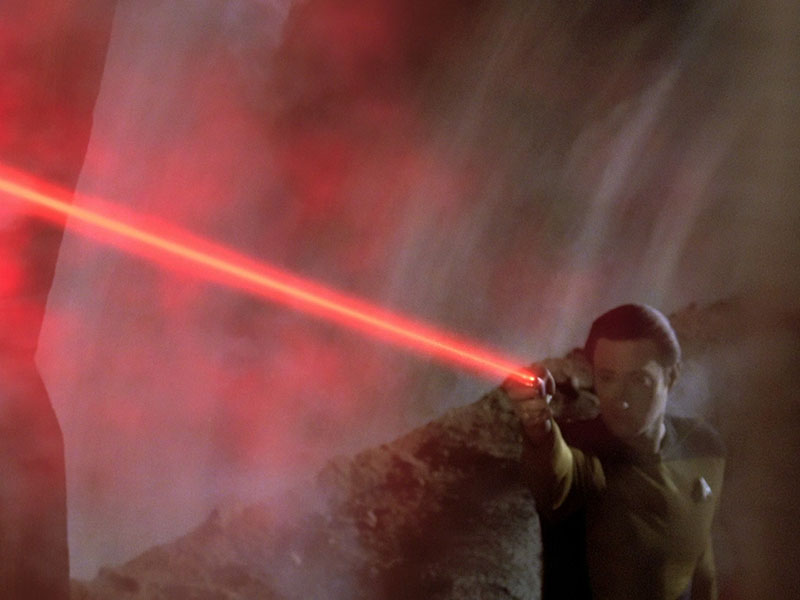 Yep, no cowboy diplomacy managed through focused energy blasts. Prior to the launch of Star Trek’s ‘Wagon Train To The Stars’, all we had to play with in sci-fi weaponry were run of the mill, death dealing lasers. The phaser came along and changed all of those simple death rays. Before Obi-Wan, Luke or Darth Vader’s humming lightsabers, before Harry Potter and his obnoxious little Hogwarts comrades waving around their wands, the coolest weapon in all of the geekverse was the phaser.

Ah, the mighty phaser. It’s a sexy, futuristic ray gun which would even see Buck Rogers or Han Solo shit their pants if they found themselves on the wrong end of one battling Captain Kirk or Commander Riker in a firefight. It’s one piece of trusty 24th century gear no self respecting Away Team – especially a randy Red Shirt mob – would leave their Starship without taking along fully charged.

What’s your preferred Starfleet sidearm? It’s hard to choose when you have so many great gadgets. What do you take along when planet hopping and roaming around freely planetside? Maybe you’re retro. Do you go old school – a phaser pistol Type II from TOS? You may prefer the sleek ‘dustbuster’ model from early Next Gen, or the modified version which debuted in TNG’s season 3, a redesign thanks to Next Generation Senior Illustrator Rick Sternbach. 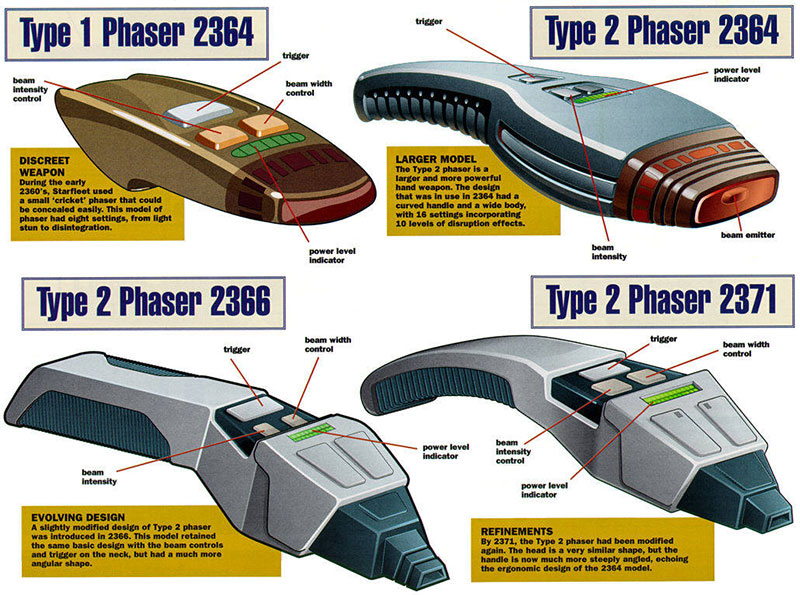 The Type I and II phasers, seen on “Star Trek: The Next Generation” | Photo: Ex Astris Scientia

My tastes run to the smaller end of the energy focused weapon spectrum. I’ve always loved the unassuming little Cricket. Huh!? What’s a Cricket, you say? Nope, it’s got nothing to do with European or British team sports.

My Cricket isn’t that incessantly chirping insect the Chinese pride for its supposed good luck charms. This Cricket is the most basic version of a Starfleet weapon. Phaser, for the uninitiated, stands for: Phased Energy Rectification. It’s a fancy term for a high powered ray gun which stuns, kills, heats or even fully disintegrates an enemy, an object, hell, even a shiny stewing pot in a galley. Speaking of shooting off phasers on starships; what exactly was cooking in that Enterprise galley pot anyway? Biscuit dough?

One truly cool, flexible feature of the Kirk era Type I Phaser was the way it snapped neatly into a Type Phaser II pistol grip. In this new configuration, the original conceived cricket phaser was instantly upgraded. It now had more power and a more accurate targeting capability. 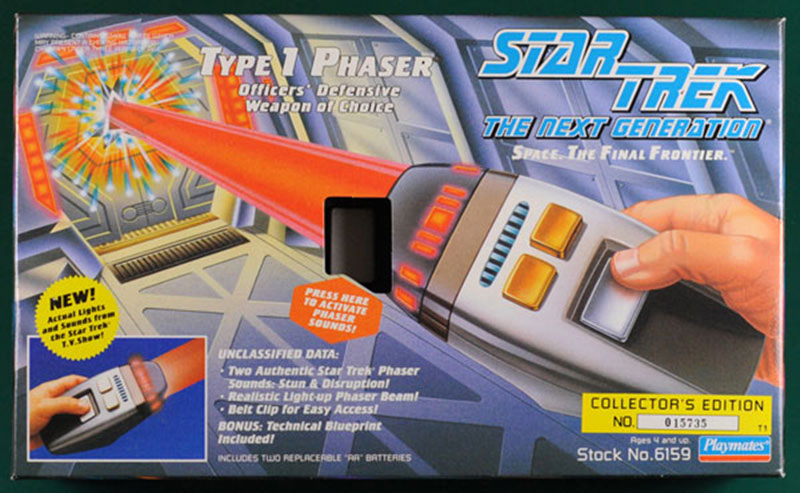 Of all the Cricket’s appearances throughout Trek’s first spinoff’s run, TNG’s ‘The Game’ showed us that a Type I Phaser boasted a really nifty capability. While evading the mind warped Enterprise crew, as he’s chased throughout the massive starship, Wesley Crusher rigs a Cricket to automatically fire energy blasts at a force field on a randomly timed schedule. The diversion works in buying him some time to escape, though he’s ultimately captured by Worf and Riker. I think Wesley missed his chance by using the low profile blaster as a decoy. He should have kept the little powerhouse of a phaser and used the Cricket on them. 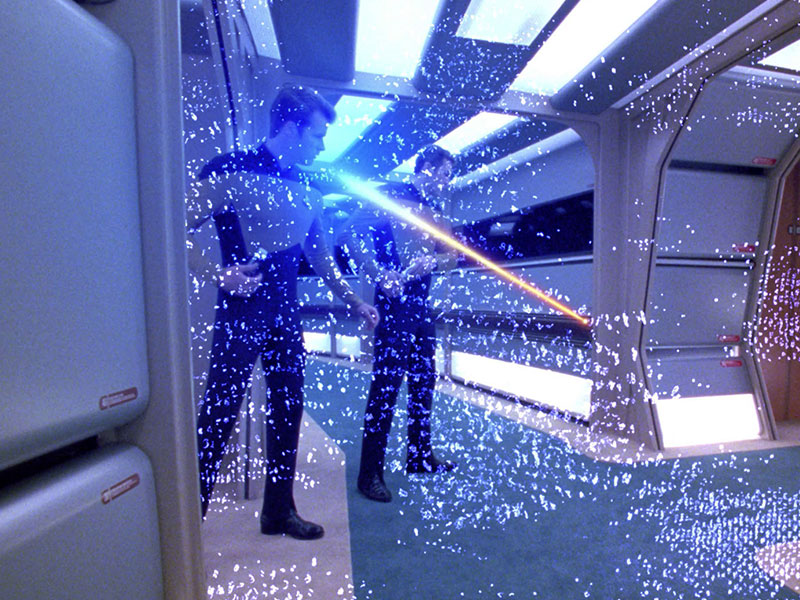 I wish you fun times and good luck on all your future Starfleet exploration. On your next secret mission or Away Team excursion, consider taking an easily concealed Cricket Type I Phaser. It may not pack as much power as your standard Type II, or the beefy Armageddon like beam generated by say a phaser rifle, but it’s small enough to hide practically anywhere and still gets the job done. Let’s see what’s out there – with my Cricket chirping away all the while.