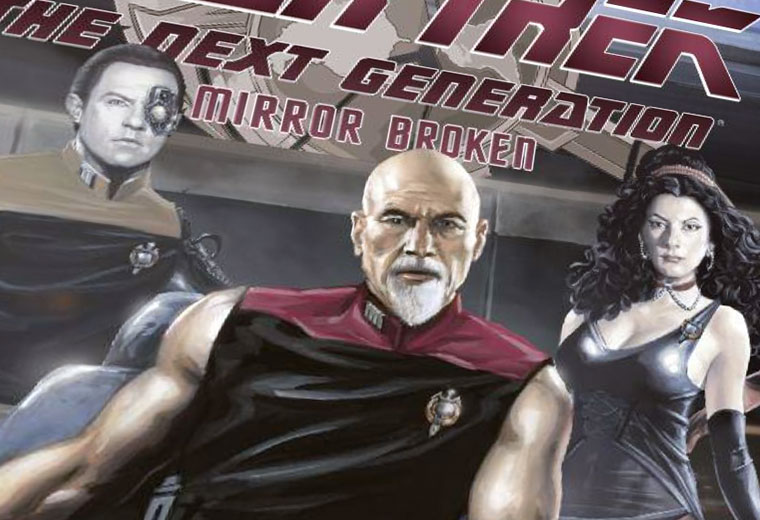 What is the appeal of the Mirror Universe? Why do I fill with glee when my favorite Vulcan sports a goatee, or when witnessing Intendant Kira playfully torture Miles “Smiley” O’Brien? Diving into fringe universes allow us to question our own positions in our own reality. What would our world be like if we had gone left instead of right? It’s probably a question on most of our minds these days. Is the grass greener on the other side, or is the field simply barren. In Star Trek terms, the Mirror Universe certainly allows our crew an opportunity to play BIG, get weird, and antagonize the audience with a horrifically twisted portrayal.

The Mirror Universe is a plot device we’ve seen in The Original Series, Deep Space Nine, and Enterprise but we’ve been left to fantasize about the crew of the Voyager and Enterprise-D. Until now. IDW Comics has been killing it with their licenses of late. With Boldly Go, Waypoint, Starfleet Academy, and their Green Lantern crossover, Star Trek comics have never been so well received by the mainstream comic book audience. 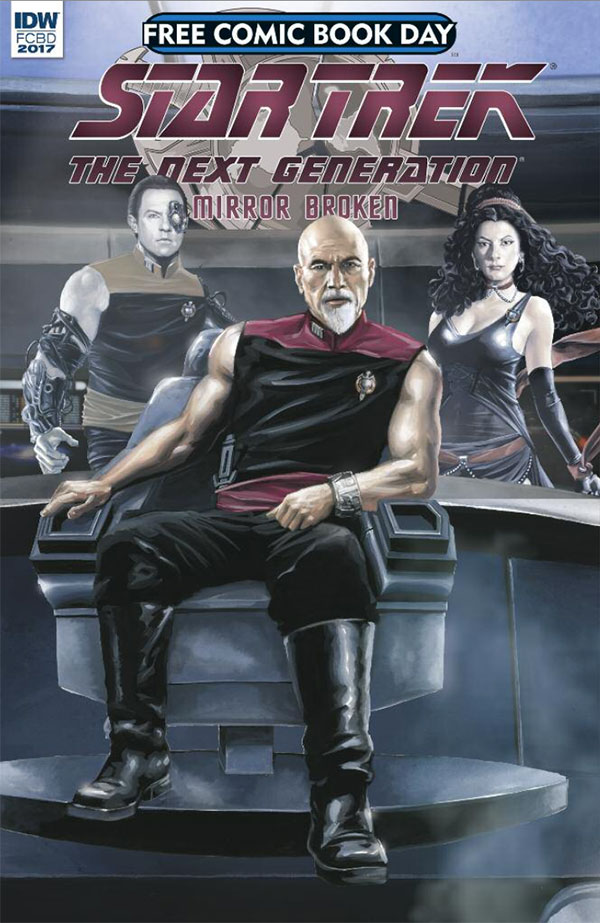 For Free Comic Book Day (the annual celebration where comics publishers offer a variety of free books for retailers to hand out, hopefully inspiring the crowd to also support local businesses with actual dollars), IDW unveiled Star Trek The Next Generation: Mirror Broken. Written and illustrated by the team that previously brought us Harlan Ellison’s unaltered vision of The City on the Edge of Forever (David Tipton, Scott Tipton, and J.K. Woodward), this short preview of the eventual mini-series offers a brief prologue into the fractured world.

In the afterword to the comic, the Tipton brothers state that “some people mistake the Mirror Universe for something like the Bizarro World; it’s not that people here are the opposite of the characters we know. Rather, they’ve been altered by their environment, and so the question of how much of that person’s gifts and liabilities are inherent, and how much is learned behavior, is what makes it interesting.” You don’t just slap a goatee on a character, and Voila! – Evil Picard! But the facial hair sure is a nice touch of narrative shorthand. 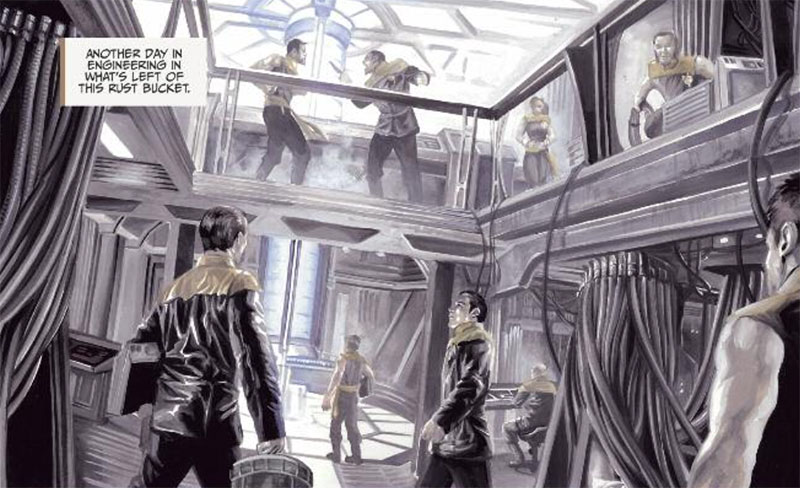 The Tiptons choose Lt. Reginald Barclay for our gateway into the Next Gen’s mirror. That’s an obvious but brilliant selection; our meek, but steadfast engineer has a lot of dark thoughts percolating in his captions. He’s not at all happy with his position on the ship (not the Enterprise-D BTW, but the I.S.S. Stargazer), and is on the hunt for the next opportunity at advancement. That chance presents itself when Lt. Yar obliterates a convoy of Vulcan slave ships, and Barclay flexes some serious muscle.

As viewed by Barclay, “The Terran Empire is in a sad shape. Spock’s weak-willed era of reform made it feeble and indecisive.” As we saw in the Deep Space Nine excursions into the Mirror Universe, the events of the original series only offered a temporary relief from this cracked morality. The Klingons and Cardassians will eventually succeed in their domination over the Terrans, but Barclay will be damned if he’s going to go down with the rest of his race. 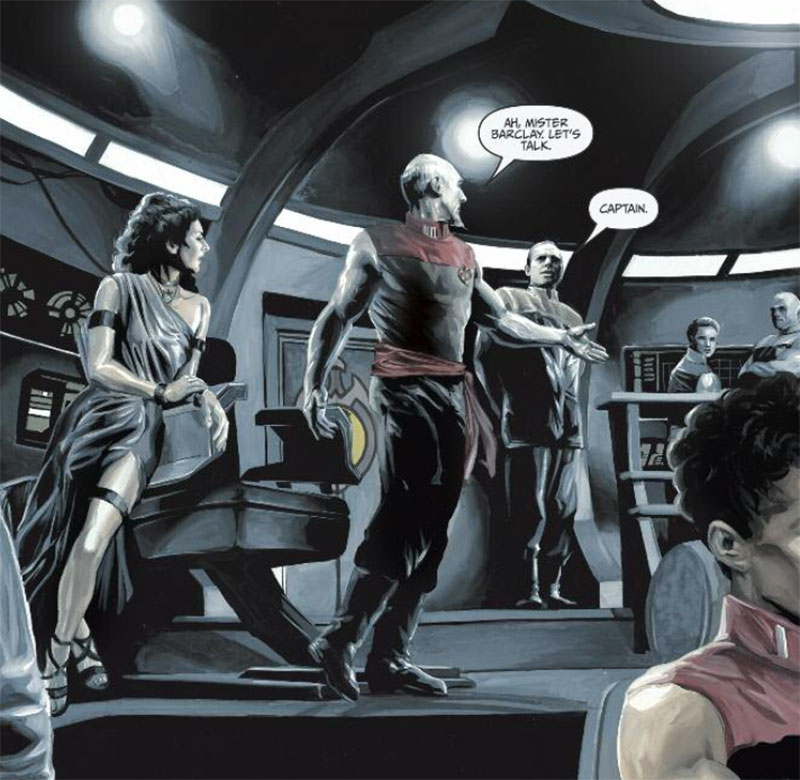 As is painful with most Free Comic Book Day titles, this glimpse into the Mirror Broken series lasts only 12 pages; the rest of the book is filled with character designs and previews of other IDW Star Trek titles. However, we get enough to salivate. Barclay is ripe with terrifying potential. The Mindwitch Counselor Troi will certainly delve into dark territories of psychotic sexuality. Picard’s pet android, Lieutenant Commander Data appears to have been splicing Borg technology into his physique, and I’m betting will truly agonize our fandom with a devious display of villainy yet to come. Yet, the true draw of the series has to be the goateed and jacked on steroids, Captain Picard. Will he still have a flair for Shakespearean monologuing, or does he fulfill that creative spark by feeding crewmembers to his ready room python (not a euphemism, but an actuality)?

We will have to wait to see if Riker, Worf, and the rest of the crew show up in Mirror Broken; the first issue hits stores on May 17th, and will also be available to purchase digitally. Whether you’re already hooked on the IDW comics, or a newbie to the medium, you’re not going to be able to resist this series.

Unfortunately, you may have already missed out on this issue of “Mirror Broken” and the other offerings from this year’s Free Comic Book Day. However, some comic shops may still have a few copies available.

Stay tuned to TrekNews.net for all the latest news on Star Trek comics.