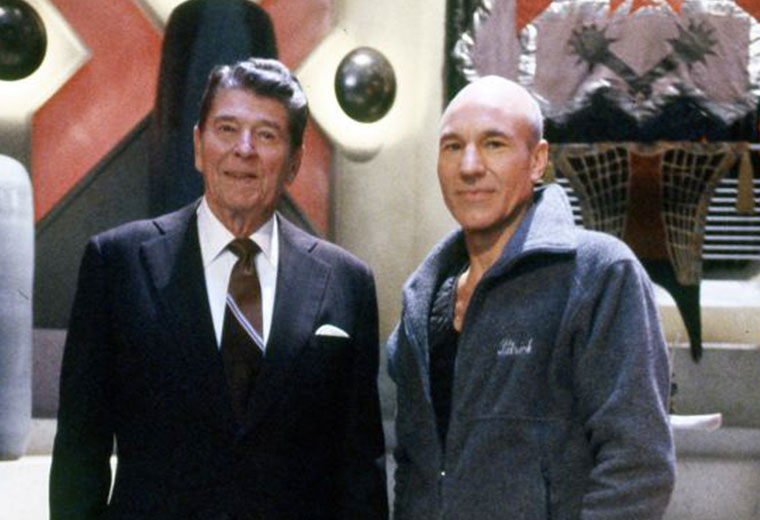 Super Fans impress as a special breed. For the dedicated among us following a dream of life’s specialized pursuits too much or too extreme never becomes an issue. From football fans who quote pages of statistics of favorite team victories or fantasy baseball aficionados who enjoy pitting players against one another in different sports eras, the unwavering loyalty and deep love of something for a select few of us knows few boundaries. Among pop culture and entertainment, Star Trek fans – Trekkies or Trekkers – number famously among the most dedicated fans of them all.

The Force is strong with these super fans! (Sorry, Star Wars lovers, I couldn’t resist!)

Reading my TNG at 30 column means it’s a safe bet you’re a big time Trekker. Maybe you’re even a hardcore Trekkie. Hell, perhaps you go to work or school fully dressed in a Starfleet uniform! You may collect all the props, action figures, models and more. Playmates and Diamond Select toys and replicas were always my prime collector source.

I’m a Trekker. I’ve been one since about 4 years of age. If I wasn’t a fan, I probably never would have written episodes of The Next Generation and Deep Space Nine. I certainly wouldn’t have written my book, Star Trek Sex: Analyzing the Most Sexually Charged Episodes of The Original Series. When I meet fans at conventions or in everyday life, they’ll often ask, ‘You must be a super fan to have done your professional work for Star Trek!’

Honestly, though, could anyone compete with these fabled super fans? These are guys and gals who live and breathe their most treasured space opera. They walk the walk and warp the warp signature. To them, conventions aren’t simply fun places to hang out or spend some quality time. Cons are must go to places of real devotion.

Can you compete with a former President who wanted to sit in the Captain’s chair – and actually did it? How about royal star trekking with King Abdullah of Jordan? As a Prince, he scored a walk on part on Star Trek: Voyager. From groundbreaking astronauts, to the smartest man in the world – or technically, the solar system – here now are some of the most famous, celebrated and devoted Trek fanatics around.

No matter if you are a fan of this Republican President – either of his Hollywood movie resume or his two terms as U.S. President – one thing is crystal clear: According to Patrick Stewart, Ronald Reagan sat in his Enterprise D Bridge Captain’s Chair and more than enjoyed the privilege. 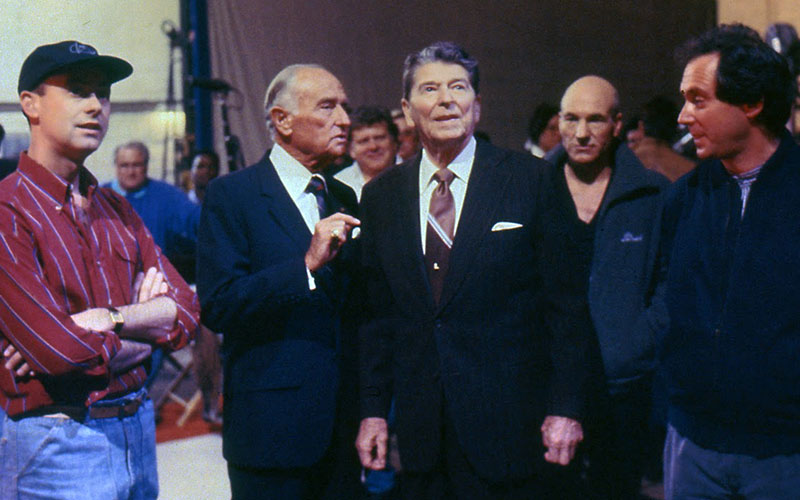 President Ronald Reagan visiting the set of Star Trek: The Next Generation

While guesting on Seth Meyers talk show, Stewart talked about money being abolished in the 24th Century, then the chat turned to celebrities visiting his Trek set. Jean-Luc Picard’s alter ego gushed over the thrill of having a former American President tour the Trek sets at Paramount Pictures, while they filmed Next Generation in Hollywood. Stewart said, “It was thrilling to have him on the set. We were all very honored by his presence.”

If you’re a Prince can you have anything you want in the world? I’d probably try for world peace myself, if I was a royal, but that’s a tough sell for whomever you may be. Well, perhaps you can’t get absolutely anything, but snagging a walk on part in your favorite TV show is pretty darned cool. It certainly qualifies you as being a super fan. 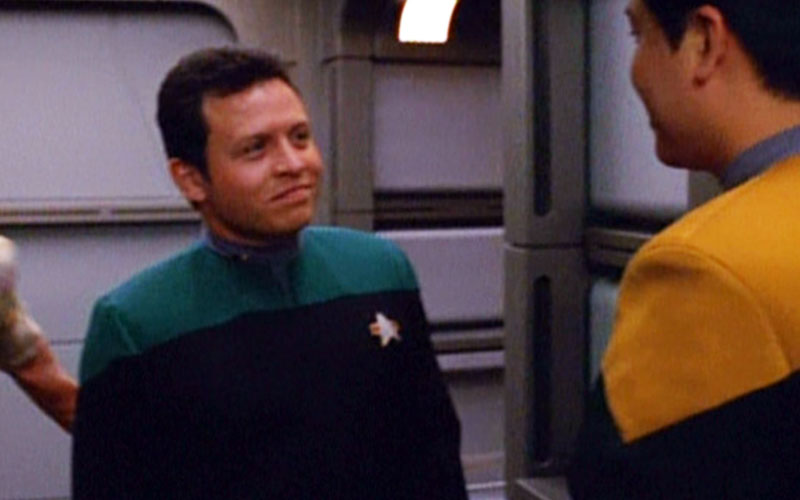 Prince Abdullah had no idea what amazement he was in store for – the cameo role was arranged in advance by his US advisor and was kept as a complete surprise. The episode is, “Investigations”, and aired in Voyager‘s 2nd season. King Abdullah continues his Star Trek fandom by being the main investor in a Star Trek styled theme park located in his country.

NASA Astronauts are today’s real Starfleet members. One groundbreaking astronaut got to merge her real life career into a role on Star Trek: The Next Generation. 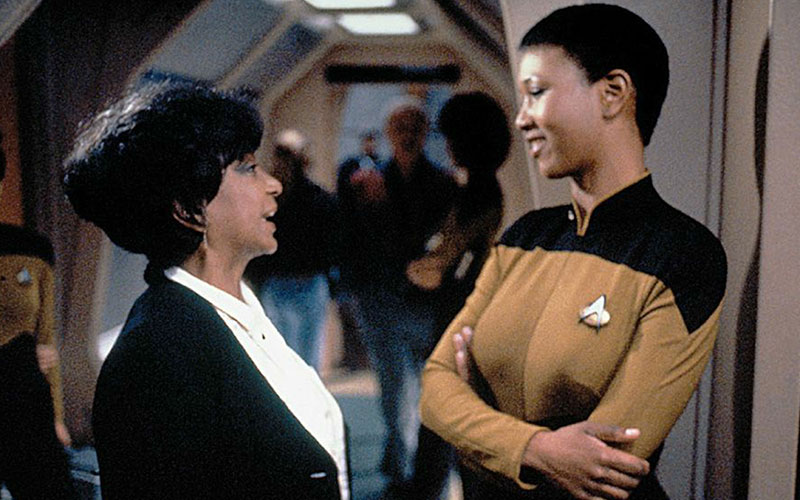 Astronaut Mae Jemison with Nichelle Nichols on the set of Star Trek: The Next Generation

Jemison is the first African American woman to go into space, as mission specialist aboard the Shuttle Endeavor in 1992. While Jemison filmed her part on the Trek sets, her good friend, actress Nichelle Nichols – Lt. Uhura – visited her.

Can the smartest man in the world outsmart a sentient android or even Albert Einstein? How about going a logical debate round or two with the fabled Sir Isaac Newton? Stephen Hawking got a chance to match not his genius scientific wits, but his card playing prowess against three intellectual heavyweights. 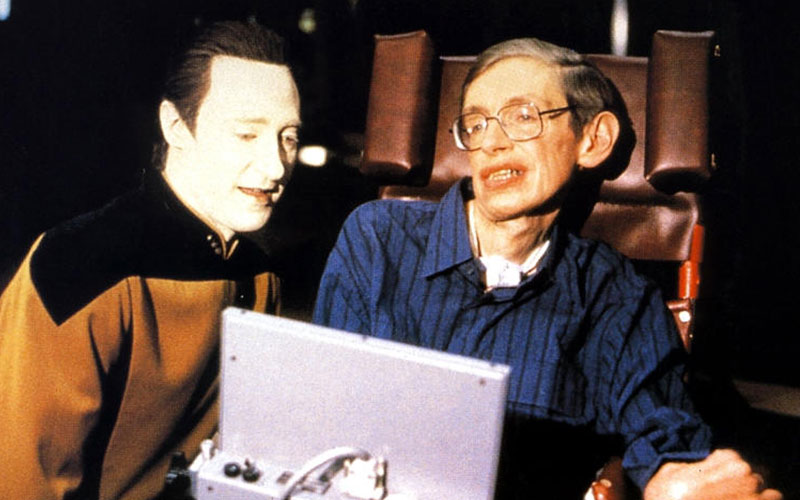 Professor Stephen Hawking with Brent Spiner on the set of Star Trek: The Next Generation

The Next Generation episode is “Descent”, and famed scientist, intellectual and author, Stephen Hawking – A Brief History of Time – gets to play holographic poker in the Enterprise’s Holodeck. Data heads up the match with Einstein and Newton, and it’s clear how much Hawking is enjoying his fan fueled romp.

Star Trek‘s always been a special place for fans and the wonderful creative aspects they’ve brought to fandom. How many other fans can claim they literally saved a beloved television show to see another season, then to go on to syndicated and feature film success?

But Trekkers aren’t content to merely watch their passion – they want to create it, and they often do just that.