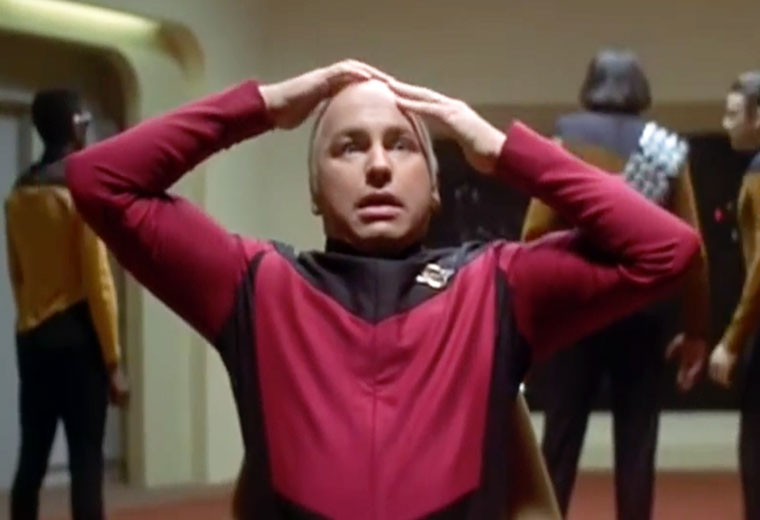 Fans of television variety shows like Saturday Night Live, In Living Color and MADTV are more than familiar with the sketch programs poking fun at Star Trek. With endless broadcast reruns, YouTube and the time shifting of on demand streaming, Trek TV skits are firmly part of our American pop culture. TV’s fine, but how’s about seeing Trek satire on the big screen?

Trek parody is a staple of television – a dependable performance cottage industry of sorts. From a bold inception in 1976 on Saturday Night Live – with John Belushi as classic Captain Kirk and Chevy Chase playing Spock – to Jim Carrey’s Farrakhan fighting Kirk on In Living Color and Will Sasso’s bloated Shatneresque Kirk on MADTV, along with the innovative fun of Seth Green’s Robot Chicken, Trek spoofs score big. 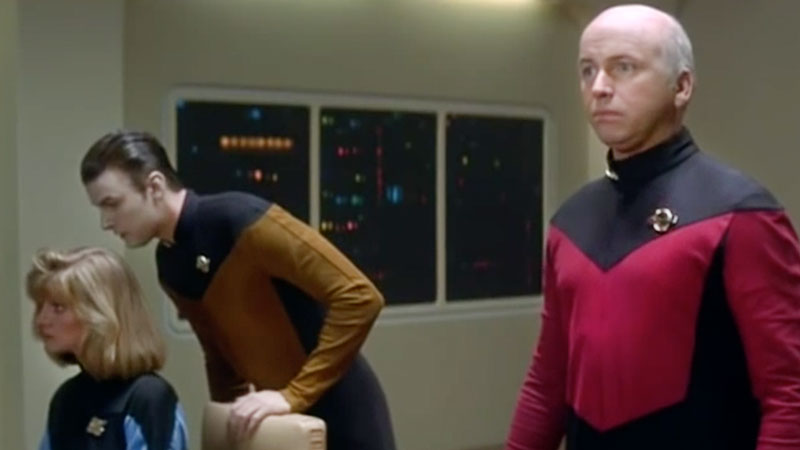 Sci-fi provides artists with plenty of juicy material, allowing Trekkers and Trekkies to laugh at our beloved shows, movies and at ourselves. Family Guy does Trek silliness, and animated Futurama even based its entire run as a kind of quasi Star Trek satire.

Yes, it’s been a crowded TV landscape for Star Trek spoofs over the years, but what of feature films? John Ritter as a hapless Captain Picard in 1992’s ‘Stay Tuned’ sums it up perfectly. “Holy Shatner!”

Hollywood loves science fiction action. Early space opera romps such as Buck Rogers (1930’s) or the many serials of Flash Gordon cemented the audience’s love affair with seeing dashing heroes and heroines fighting the big baddies far away in outer space. These serialized space operas were popular enough to recycle into different variations over the years, so that many generations could share in the fun. After the silver screen launch of the mighty heroics chronicling the forefathers of Captains Kirk and Picard, came raucous laughter of spaced out satire. 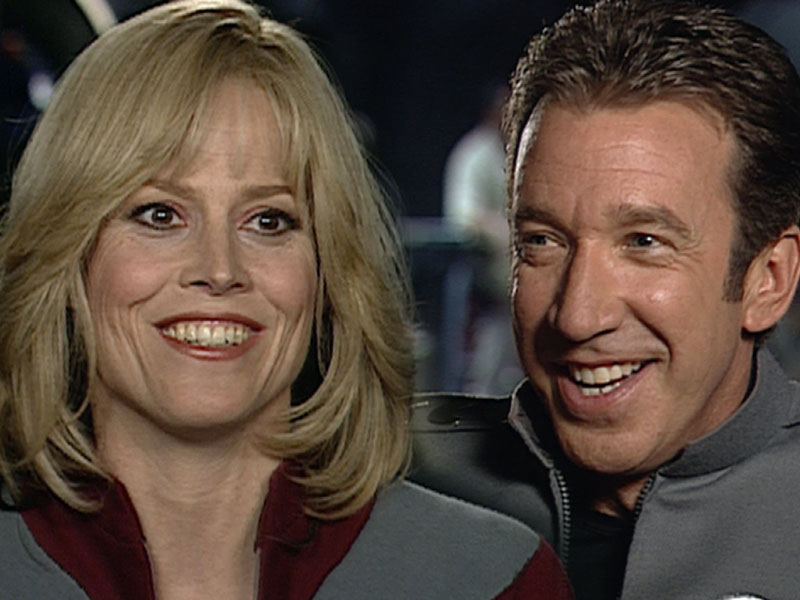 Cinema’s given us the sci-fi satire of Mel Brooks’ Spaceballs and Tim Allen with Sigourney Weaver co-starring in the gloriously goofy Galaxy Quest. Thumbs even got into the laughing act with Thumb Wars. However, short form sketch parody – the kind in which SNL and MADTV excel in – isn’t a thing movie studios regularly churn out. However, 1992’s clever comic romp, Stay Tuned, is perfect vehicle to skewer a host of TV tropes, including the now iconic Star Trek world. 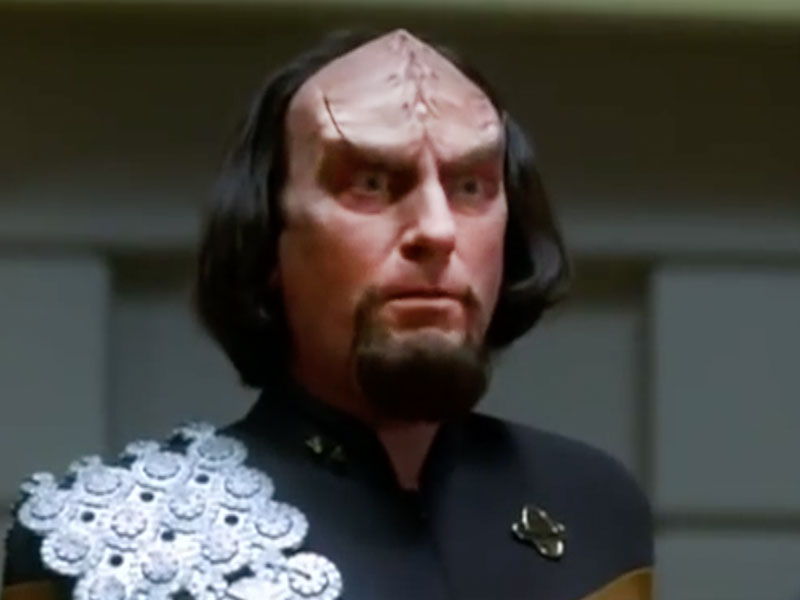 John Ritter and Pam Dawber play a suburban couple with two kids, though their white picket fence life isn’t unblemished. Ritter’s character is thoroughly obsessed with television. He worships his boob tube, even putting off making love, choosing instead to mimic sword fighting he sees on TV. Through a devilish bargain (think DirecTV from hell) he gets more TV than he can ever imagine, absorb or perhaps survive. 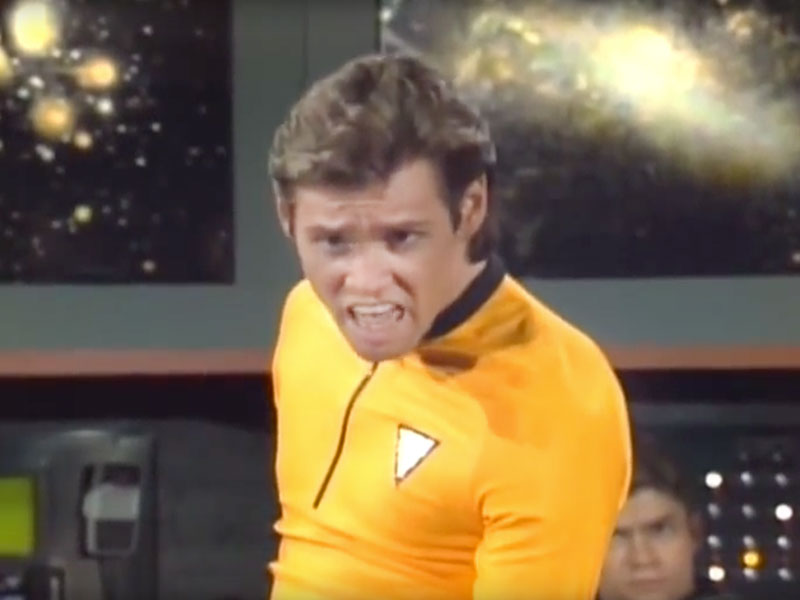 Soon we’re treated to a trek among the twinkling stars, with a take-off of the magnificent Enterprise-D. Ritter finds himself plopped in the Captain’s chair dressed up in a knock-off Starfleet uniform, as chrome dome bald as Jean-Luc Picard. To complete the Next Generation ambiance, the faux Starfleet officer is flanked by dead ringer clones of Worf, Data, Geordi, Riker and Troi.

Unlike many TV spoofs, this movie’s bridge set is quite large and detailed. With cinematography, lighting, costumes and makeup all coming in top notch. The most disappointing part isn’t the superb presentation, but an all too brief running time. Coming in at only around 47 seconds, this Trek spoof may be one of the more accurate ever, yet it’s one of the shortest in spoofing history.

Watch and enjoy the Stay Tuned parody of Star Trek: The Next Generation starring the always hyper hilarious John Ritter. Delight in a big scale, skewering of Gene Roddenberry’s sequel series to the original, classic Star Trek. Sadly, it’s short, but oh so silly sweet. You’ll most likely agree with Ritter’s crazed character, and maybe even echo him when he pleads, “Holy Shatner!”