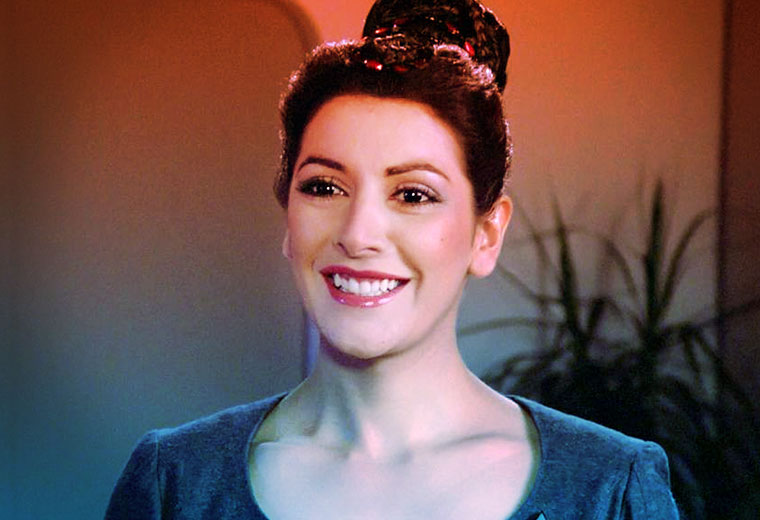 You’d think sitting next to one of Starfleet’s top dogs on a flagship, Galaxy Class vessel would count for more, but Marina Sirtis as Counselor Deanna Troi is sort of the Rodney Dangerfield of our Enterprise D’s crew. Captain Picard’s empath, ranking Bridge Officer and the starship’s psychological counselor, yet in many ways, she’s like iconic comedian Rodney Dangerfield – she simply doesn’t get any respect.

Fans can be split, even downright conflicted over Troi and her proper role in Star Trek: The Next Generation‘s universe. In one way, the presence of a sensitive women with empathic powers ably assisting Picard’s diverse crew of star trekking professionals is welcome, yet many Trekkers complain over her limitations. Despite great physical beauty, they don’t look at Troi as being ‘sexy’ – in a narrative, flashy way. 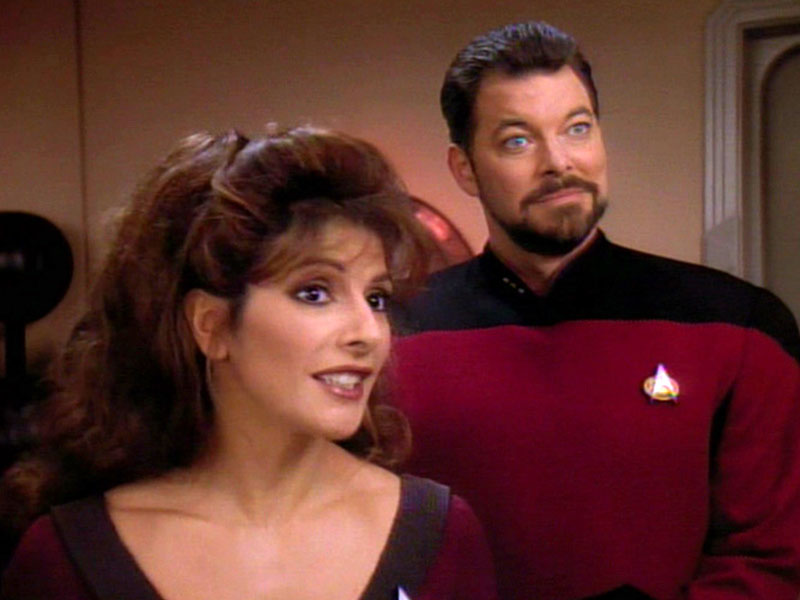 Troi’s powers are hard to dramatize. She isn’t a super smart, super strong resourceful android. She’s no eternally alert, growling Klingon warrior, nor a techie, geek guru with unique visor vision. Troi gives and gets the feels. It seems her fabled Betazoid blessing can also act as a millstone of a curse.

She gets feelings. She gets impressions. She senses. Vague much? It’s as if she can’t make up her mind. In fairness, though, sometimes she can absolutely nail motivation or even explicit intentions, but mostly Troi acts as feeling sponge – a kind of doughy biscuit soaking up the emotional gravy and saucy ambience of those about her.

But it’s not only the vagueness Troi brings to proceedings. It’s also the intimacy her abilities bring to the table. For many, the act of a psychic such as the half Betazoid tapping into their feelings feels like intrusion or even an invasion. Don’t worry. It’s perfectly okay. Payback can be a Betazoid bitch. When Deanna Troi encounters a suave negotiator named Devinoni Ral, the empathic tables are neatly, though stealthily turned. 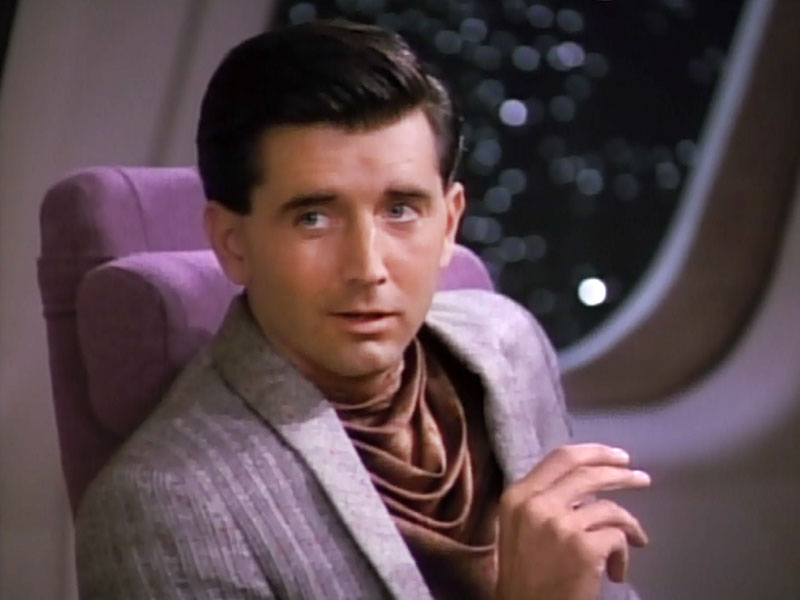 “The Price” numbers as one of my favorite Next Gen tales. Deftly juggling diplomacy, adventure, humor and romance in equally pleasing amounts, it breaks the predictable mold. Too often a diplomatic mission plods along way too talky or even truly boring. Refreshingly, “The Price” offers negotiations coupled with intriguing scientific analysis and exploration – acting as backdrop to Troi’s romantic fling – making its focus mature and fully engaging.

Airing in TNG’s third season, written by Hannah Louise Shearer, the tale introduces the concept of a stable wormhole – well before the one we’d become so accustomed to and call the Bajoran Wormhole in Deep Space Nine. Alas, in the end, the cosmic space shortcut proves decidedly unstable, which seems fitting, after the passionate romantic affair Troi embarks on with Ral proves to be equally as fleeting and fragile.

Red Alert! Security Protocols In Effect! Where’s your empathic ability when you most need it, Counselor? Care to schedule your own therapy session? Maybe Devinoni Ral’s simply to blame.

Actor Matt McCoy plays Ral as debonair deal maker, who’s always in control. He’s an operator; a man who’s cut a multitude of big deals across the galaxy and whose confidence is never in doubt. It’s a credit to McCoy’s performance that despite the revelation of his deception in not telling Troi of their shared Betazed heritage, we can never truly hate his character – maybe simply accept disappointment at his slick relationship machinations involving our favorite therapist. Occupational perk or hazard? Douchey jerk or driven superstar? 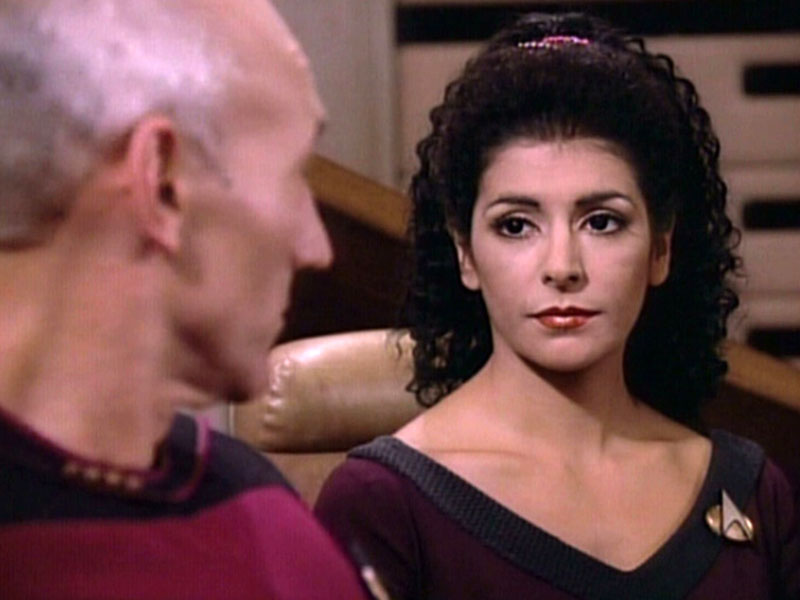 In the end, we’re left with Ral’s own words to gain perspective. An episode quote sums up the complexity of the two’s romantic entanglement.

Ral to Troi: “I’m grateful for what you did, in a way. It’s made me take a hard look at who I am. I don’t like what I see. I once asked you to run away with me, and now I’m asking again. I need you. You could help me change, you could be my conscience!”

She replies, “I already have a job as counselor.”

Deanna Troi’s a pro. She knows this is one ‘bad boy’ who’ll probably be forever in constant need of a mentally helping hand. The counselor will stick to her current job, than take one as Ral’s future long suffering girlfriend, or worse yet, his tortured bride.

For Marina Sirtis, this meaty entry gives her a chance to shine in so many aspects. Here’s Troi struggling in an open, even vulnerable capacity. This is romantic Troi and it isn’t always a safe place. She turns in such a well rounded, organic performance. It’s also a triumph for gender equality. We’re usually treated to Trek’s male characters like Kirk, Spock or Riker and Picard conducting a romantic liaison within confines of a complicated mission. One of our female principals gets a crack at balancing a sexual escapade with the demands of a Starfleet career. Sirtis excels in the bold turn.

Evidently the price of being Counselor Troi can be a highly emotional one, but ultimately it proves a satisfying experience. For anyone doubting how dynamic or interesting she can be, take a look at The Price again or try it for the first time. You’ll find much to like here in one of the most memorable Troi centered stories. Rodney Dangerfield as a Betazoid? I’m sensing no respect! No respect! Hey, I can see it working.